Drink Along Review – Invader Zim: Enter the Florpus – Should You Pull Out or Continue Deeper into the Insanity of Jhonen Vasquez’s Cartoon Movie? 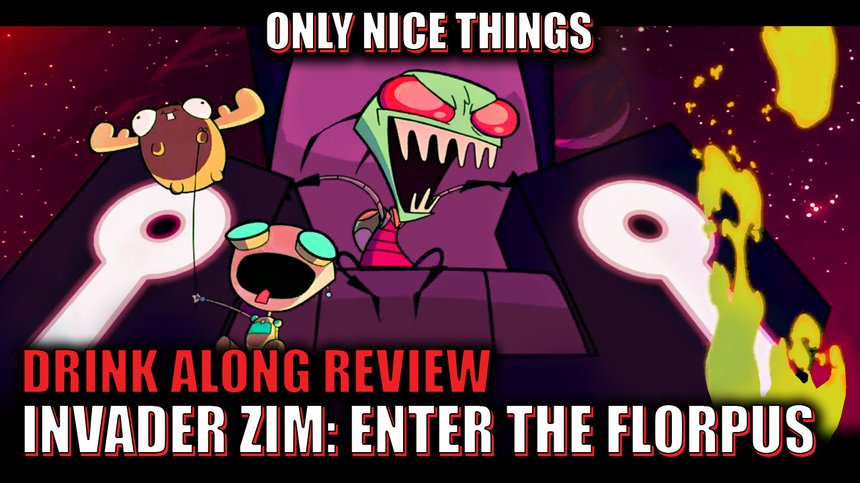 Remember the crude, gothic humor of Jhonen Vasquez? I sure do! Invader Zim was such a silly, over the top cartoon that somehow made its way onto Nickelodeon and was not surprisingly canceled after a short second season. The show featured an absurdly screaming alien trying to take over the world with only one lone boy trying to stop him. It featured all things that you wouldn’t think to see in a cartoon at the time like bizarre alien technology, nihilism, and the oppression of children’s innocence. Thanks to Netflix and the power ($$$) of nostalgia, we now have a movie based off these characters that continues like the series never left. Is my childhood fondness for the show going to skew my opinions on this or does Invader Zim: Enter the Florpus warrant a watch?

For the video review, I was influenced by the DVD release of the Japanese zombie movie, Wild Zero. A special feature on the disk was a drinking game that prompted the viewer to take a drink any time certain stipulations appeared on screen like fire shooting out of something or a zombie's head blowing up. This always followed me and I finally got a chance to incorporate that aspect into what I call a drink along review. Anytime I say something negative, I have to take a drink. As an added bonus, a beer bottle will also pop up on screen to prompt the viewer to take a drink as well.

So grab a beer, warm up some waffles, and watch the drink along review HERE.