Review: In THE FANATIC, John Travolta Wants To Break Stuff 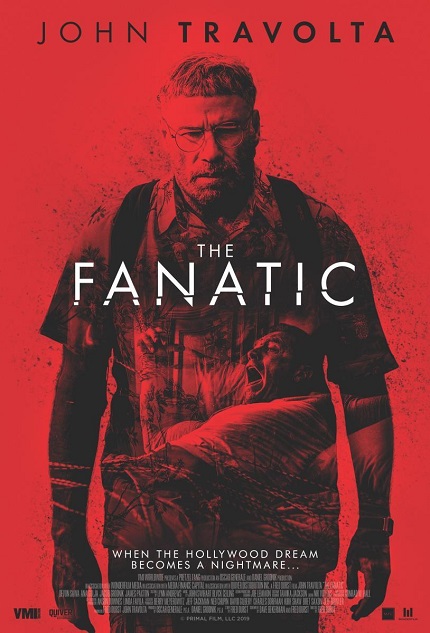 Aside from fronting Limp Bizkit – that nu metal band most people don’t want to admit they moshed to in high school – Fred Durst has also branched out into directing indie films, first with the drama The Education of Charlie Banks (2007), then with the sports film The Longshots (2008), and now with psycho thriller The Fanatic, which he allegedly based on a real-life experience with a stalker. Judging from this movie, it must have left a mark.

Sporting a ridiculous mullet, John Travolta plays Moose, a lonely film fan who idolizes horror movie star Hunter Dunbar (Devon Sawa, who 19 years ago played an unbalanced celebrity stalker in Eminem’s Stan video and is now on the receiving end of those misplaced affections). After many frustrated attempts to get the actor’s autograph, our sadsack protagonist tries to worm himself into his idol’s life, ruining it in the process.

It’s a story that’s been told before, and even if Durst is trying to say something about the dark side of unchecked fandom and how damaging it can be for people to project too much onto their favorite star, the whole thing is just too mean-spirited. The director clearly has contempt for his fans, treating Moose as a dysfunctional annoyance you’d never want to be anywhere near; even if he’s supposed to be autistic, the movie never establishes this and the guy just comes off as irritating more than anything.

Dunbar is no better: a violent aggro type with a short fuse (it’s no wonder he’s a nu metal fan) whose only bit of humanity comes from his undeveloped relationship with his son. With his view of both actors and fans, you’d swear Durst despises Hollywood and isn’t being the least bit subtle about it, not that you’d expect subtlety from the guy who wrote Break Stuff. With no moral center, this movie’s just ugly; the closest thing to a relatable protagonist is Moose’s friend Leah (Ana Golja), the only person who acts rational here, but then again, she’s supposed to be one of those bottom-feeding paparazzi photographers.

Credit where it’s due: even in a thrashy thriller like this, Travolta commits fully to the part of Moose. Clad in loud, colorful shirts, baggy shorts, sporting nerdy glasses and the kind of hairstyle hats were made to hide, the actor plays the character like a twitchy, overgrown manchild who throws temper tantrums as if someone took away his toys; he even at points attempts a horrid British accent which will make you long for the days when Brad Pitt tried to play an Irishman.

Moose is insufferable and it’s even stranger how nearly everyone in the film goes on about what a great guy he is and tries to pass off his obvious problems as a quirk, when all you want to do is run away and never look back. Travolta is fascinating to watch in a “what the hell happened to him” way, but seeing as how he’s firmly in the “Bruce-Willis-level-of-not-giving-a-shit” phase of his career, it won’t be long before he’s calling up Tarantino again.

The Fanatic is a thriller, but it feels more like 90 minutes of Fred Durst venting and getting a lot of things off his chest; apparently screaming into a microphone on stage isn’t enough. It’s a movie made as a catharsis, and aside from seeing John Travolta losing dignity and acting like a maniac, there’s not much else to it.

The Fanatic is currently in theaters.

Do you feel this content is inappropriate or infringes upon your rights? Click here to report it, or see our DMCA policy.
Devon SawaFred DurstJohn TravoltaThe Fanatic