Now in Theaters: READY OR NOT, Samara Weaving Is a Star 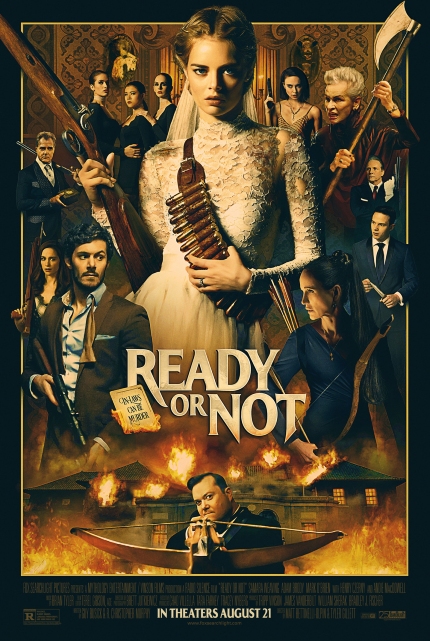 I can only wish I'd seen this horror-comedy already and knew all the jokes.

Ready or Not
Now playing in North American theaters across the continent via Fox Searchlight Pictures .

Young bride (Samara Weaving) marries her beloved (Mark O'Brien), only to learn that his apparently wealthy family insists that she plays a diabolical game of hide and seek. Cue blood, screaming, weapons -- and jokes, because this is a horror comedy.

To be frank, I have shied away from R-rated blood and gore on the big screen due to my delicate condition, so I did not attend the advance screening for critics earlier this week. (Also, I am lazy.) Still, just watching the trailers and promotional clips (including the one below) confirms that Samara Weaving has a terrific star presence and should have no problem in commanding the lead role here.

Weaving first grabbed my personal lapels when she starred alongside Steven Yeun in Joe Lynch's great bloody action picture Mayhem, which I saw at SXSW in 2017. In my review, I highlighted her character's "nail-edge charm that refuses to give up and or listen to common sense," which the actress displayed again as a very different sort of character in the new adaptation of Picnic at Hanging Rock. She impressed with the "desperate urgency" she brought to the supporting role, I thought.

Weaving hit all the right notes in very minimal time in Three Billboards Outside Ebbing, Missouri and joyfully survived McG's otherwise miserable misfire The Babysitter, so it's wonderful to see the good notices she is earning for her star turn in Ready or Not. That alone would make the film notable, though it's also receiving mostly positive notices from critics and audiences.

Trailer (below the featurette) is NSFW (not safe for work).

Do you feel this content is inappropriate or infringes upon your rights? Click here to report it, or see our DMCA policy.
Adam BrodyAndie MacDowellHenry CzernyMark O'BrienMatt Bettinelli-OlpinSamara WeavingTyler Gillett