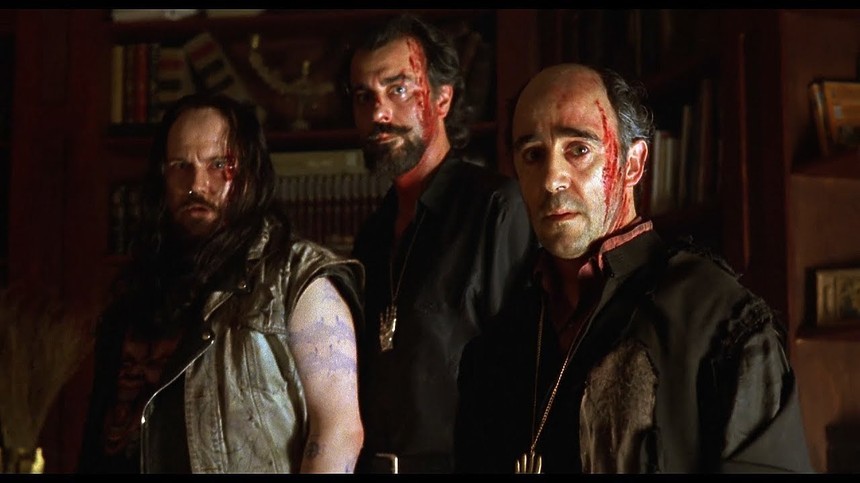 It was revealed yesterday in an interview conducted by ComingSoon.net with Blood & Flesh: The Reel Life and Ghastly Death of Al Adamson director David Gregory, that Gregory's company Severin Films would be releasing a pair of Spanish director Álex de la Iglesia's '90s classics in the coming year. We were able to get a little bit more solid info on the upcoming Blu-ray releases of 1995's Day of the Beast and 1997's Perdita Durango from Gregory and we are excited to share the first details with you.

Perdita Durango, De la Iglesia's first English language feature from 1997, was chopped to pieces in it's initial US release under the title Dance With the Devil. Severin will be releasing the film in it's full and uncut form with a brand new 4K scan from the original negative elements in Madrid. The compromised American version is a decent, if confusing, trippy film starring Javier Bardem (in what could've been a breakout role) and Rosie Perez. The full length version, previously only available overseas, reshapes the film into a psychdelic odyssey of sex, drugs, and violence that is, in the words of Fantasia programmer Mitch Davis, not unlike a "126 minute trigger warning".

Based on Barry Gifford's Sailor and Lula book series, the same books that inspired Lynch's Wild at Heart, Perdita Durango takes a deep dive into the wild transnational drug and flesh trade at the US/Mexico border. Severin has secured an interview with Barry Gifford regarding his books and his own screenplay adaptation thereof.

I was lucky enough to see the new 4K restoration at Fantasia this July, and you've never seen Perdita Durango like this, prepare to have your mind completely blown!

Also on the docket is fan favorite, The Day of the Beast (El Dia de la Bestia), de la Iglesia's 1995 horror comedy about a priest attempting to prevent the birth of the Antichrist on Christmas Day. Starring Spanish screen legend Álex Angulo and cult film icon Santiago Seguro, Day of the Beast is often regarded as one of de la Iglesia's finest hours and a classic of modern Spanish cinema.

Angulo stars as the priest who has discovered that the antichrist is set to be birthed on Christmas Day, so in an effort to prevent this from happening, he decides he needs to commit so much sin that the Devil himself will have to grant him an audience. In order to help him along his way, Angulo recruits a chubby satanic metalhead record store employee (Seguro) to be his guide to all things evil. The resulting journey into evil is a darkly hilarious send-up of organized religion and fame, as the unlikely duo battle for the future of humanity.

Previously only briefly available in the US on a croppped and English-dubbed VHS, Severin's brand new release will feature a 4K restoration from negative elements located in Madrid, as well as the US debut of Sitges Fantastic Film Festival programmer, Diego LF's feature length making of documentary, Heirs of the Beast. But that's not all, Severin are hard at work collecting more supplemental materials to make these the gold standard for de la Iglesia releases worldwide. A few months back they posted images of the director in an interview, which leads me to believe that he'll be present on at least one of these releases as well.

In regards to these two monumentous US Blu-ray debuts, Severin co-founder Gregory says,

I am over the moon to be giving the Severin special edition treatment to PERDITA DURANGO and DAY OF THE BEAST. It’s long overdue for these 90s powerhouses of audacity to be revisited,  looking pristine and ready to challenge, well, completely batter the sensibilities of genre movie fans. You don’t get movies like this anymore and we’re proud to be giving Álex De La Iglesia’s seminal works the love they deserve.

Perdita Durango and Day of the Beast are both expected to land arrive on Blu-ray in the first quarter of 2020 and we cannot wait to see them.

Do you feel this content is inappropriate or infringes upon your rights? Click here to report it, or see our DMCA policy.
Álex de la IglesiaJorge GuerricaechevarríaÁlex AnguloArmando De RazzaSantiago SeguraTerele PávezActionComedyCrimeHorrorThriller

More about Day of the Beast