Fantasia 2019 Review: HARD-CORE, A Tale Of Right-Wingers, Robots, and Redemption 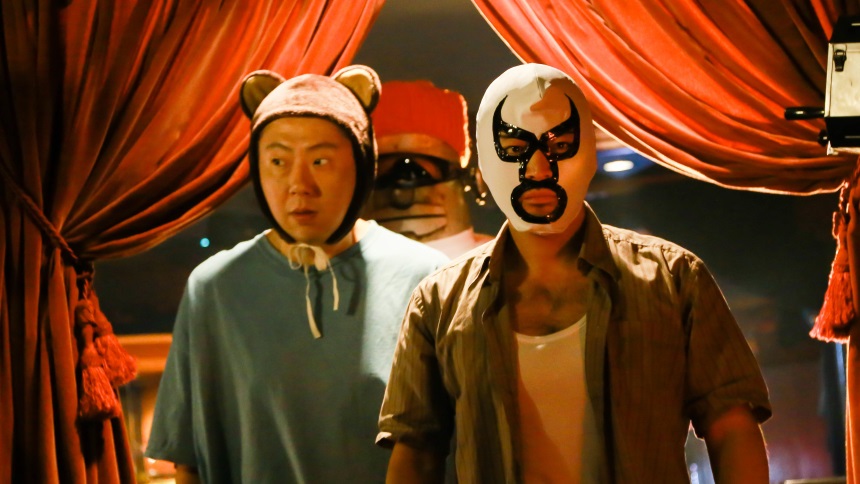 Yukon (Yamada Takayuki) Gondo is a hard-headed ne'er do well who can't quite seem to hang on to anything in his life. Having no relationships, no real job, and no goals sends him adrift in ways that often get him into trouble. Thankfully, he has a brother, Sakon (Satoh Takeru) who is usually able to wriggle him from from various traps of Yukon's own making.

While he may not have a nine to five, Yukon does have an odd gig where he helps an old hardline right-winger dig up an abandoned mine in search of a mythical treasure. The old man, played by Kubikukuri Takuzo, believes that the old empire left a chest full of treasure somewhere in the mine, and he's willing to pay workers to help find it. Along with Yukon, there is also a hulking mute named Ushiyama (Arakawa Yoshiyoshi) helping out. Ushi is Yukon's only friend, an apparently mentally disabled man who lives in an abandoned factory who has a heart of gold.

One day Ushi discovers a rusty man-sized robot in the factory and quickly wrangles Yukon to come and help him figure out what to do. The robot looks like it was put together with spare parts, but the pair quickly realize it's much more advanced than its appearance would have someone believe. Dressed up in ratty clothes, the machine, named Robo for simplicity's sake, joins the pair at the mine and makes quick work of the project, leading the newly formed quartet - Sakon included - on a wild journey of self-discovery and realization.

Hard-Core is the latest film from quirky Japanese filmmaker Yamashita Nobuhiro. A twenty-something year veteran of the film business, Yamashita hasn't ever really had a breakout success outside of his homeland. The closest he may have come was with 2005's Linda Linda Linda, which had a healthy festival run and even landed a home video release back in the days when that was a real option for Asian cult-y cinema. With Hard-Core, Nobuhiro adapts a manga by Carib Marley and Imashiro Takashi, taking the main characters and ideas and reforming them into a kind of whimsical family drama, in which the four leads are brothers in arms.

A significant portion of the film's run time is wasted on convoluted plot twists and the sinister machinations of right-winger Kaneshiro (Kubikukuri) and his not-quite-trustworthy foreman Mizunuma (Kan Suon), but there is more than enough meat on these bones to keep the enterprise moving along.

Yamada Takayuki's wonderful performance as the gruff Yukon deserves a lot of the credit for keeping the proceedings interesting. Arakawa, a bit of a hero on the Japanese indie scene after his work with Nakashima Tetsuya and Fujita Yosuke's Fine, Totally Fine, does amazing things with almost no dialogue, imbuing his character with not only an empathetic quality, but also true heart. Satoh Takeru completes the human 3/4's of the quartet as a solid foil to Yamada's simmering intensity.

The biggest challenge Hard-Core faces is the fact that it is a little over two hours, and should be at least twenty minutes shorter. It takes a long time for the most engaging part of the story, the brothers' redemption journey, to kick in. However, I really enjoyed this film, it doesn't have the same universally appealing themes and likable characters as Linda Linda Linda, but for a different audience, it could be just as engaging.