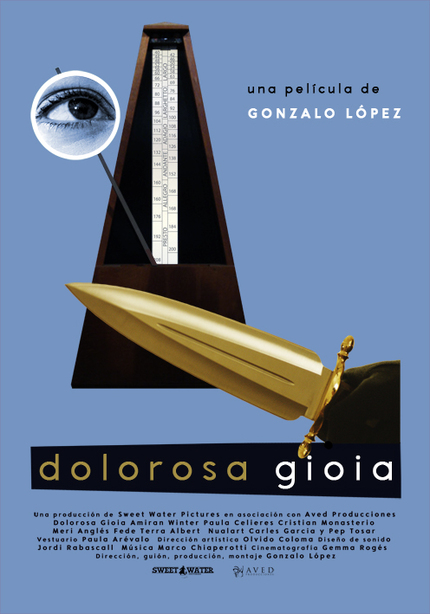 In his first feature in more than 10 years, Gonzalo López modernizes the true and salacious story of 16th Century composer Carlo Gesualdo, whose music and life is inexorably linked to the shocking murder of his wife and her lover at his own hands.

A story of artistic brilliance, love and betrayal, Sweet Pain's story feels Shakespearean in nature and perfectly suited to the Giallo-inspired style that López has chosen to bring to the table. But most intriguing (and somewhat surprising) is the film's bold near-silent aesthetic, which, if you give yourself over to it, imbues the movie with a timeless quality that sucks you in and makes it feel both modern and classic simultaneously.

The film is not silent, but all the dialog is inaudible, forcing the director and audience to rely on performance, glances, and action to tell its deceptively simple story. If the approach is frustrating at first, never fear; it quickly becomes absobing, meant to ensure the viewer is entirely focused on the broader story and not distraced by the verbal clutter that a traditional screenplay might bring to this grand narative that so fascinates, haunts and titilates López: Music. Love. Sex. Betrayal. Murder. Loss.

So you could say that in the absence of spoken word, Lopez has burdened his actors with a lot of heavy lifting. Thankfully, the small cast is up to the task, never turning things up to a theatrical level that would turn the whole proceedings into a farce. Amiran Winter plays Carlo Gesualdo, the rakish young pianist who is made to act like a dancing dog, through whose recollections we're shown the baudy tale. Granted there is a lot of staring off into the distance to do for the young actor, but Winter exudes a mature intensity that holds your attention and makes you wonder what violent plan his mind is conconcting at any given moment.

Paula Celieres plays Carlo's doomed wife Donna Maria D’Avalos who becomes a victim of her own unique brand of passions (it's Italy, remember? It's all about passion). By the end of the film, Celieres proves to have range and she's a performer I hope to see more of.

Of course we couldn't call Sweet Pain a Giallo if it weren't equal parts beauty and ugliness. A revenge story at its heart, the film holds some voilenent surprises so shocking and brutally rendered they almost seem diametrically opposed ot the elegance that proceeded them. However, they also feel innevitable, something Lopez has been building to so deliberately that it's impossible to see  them as anything but nessecary.

Sweet Pain recently completed its thearical run in Barcelona with hopes to expand across Spain. As the film moves towards finding distribution, adventurous film fans looking for something bold and unique in the genre landscape should mark it in their watchlists as something rare to behold.