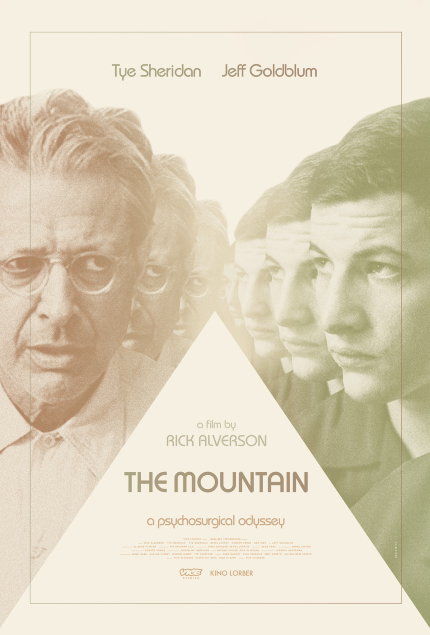 The Mountain director, Rick Alverson, doesn’t give a fuck what you think about his movies.

In his short, but eventful career making feature films, he’s already created two of the most polarizing American independent films of the current decade in The Comedy and Entertainment. With The Mountain he makes a slight thematic turn, moving away from aggressive anti-comedic character studies toward a deeper, more dramatic dive into broken desperate psyches. It’s certainly not going to be for everyone, and to be honest, it may not even necessarily resonate with fans of his earlier work, but The Mountain further establishes Alverson’s talents as a director with a unique sensibility whose work deserves serious consideration.

Andy (Tye Sheridan) works at a local ice rink driving the Zamboni. His father, a deliberately stolid Udo Kier, teaches figure skating and keeps a clinical distance from his emotional muted son. It is the ‘50s and men are expected to hold on to their feelings, and with Alverson’s very precise direction, these two men bottle them up tight in a way that is often a little too real. Andy has lost his mother to mental illness and has lost any emotional anchor to his life. When his father suddenly passes, it becomes clear just how untethered is and he sets out on a journey to find his mother which leads him to a local asylum.

It is there that Andy runs into Dr. Wallace Fiennes (Jeff Goldblum), a specialist in alternative treatments for mental illness, primarily the controversial transorbital lobotomy. Dr. Fiennes finds himself to be similarly set adrift when the hospital’s board decides that they’ll no longer support his procedure and that he’ll need to find other employment. In need of someone to document his work and a traveling companion, Fiennes recruits Andy to man the camera as the pair travel the countryside peddling lobotomies to anyone desperate enough to take them up.

Oddly, it’s here, where the film first truly takes flight and begins to develop some semblance of a plot that the journey turns into more of a character study of the good doctor and Andy. As Fiennes’ procedure falls more and more out of fashion, he begins to descend into booze and broads to fill the void, with Andy as a witness to his egomaniacal descent.

When the duo comes across a father, Jack (Denis Lavant) desperate to help his daughter, Susan (Hannah Gross), the film takes a hard left turn into the kind of absurdist explosions Alverson is better known for. Fiennes takes on the job, and the work takes him to a remote cabin in the woods where they are far from the prying eyes of the medical establishment. Andy begins to develop feelings for Susan, things get complicated and his world starts to open up.

Over the last decade, Jeff Goldblum has become a performer from who a particular style of acting is expected, grandiose gestures, syncopated line delivery, and often halting verbal tics, all of which he puts to good use here. His Dr. Fiennes, though effectively portrayed as a relatively contained man of his time, is the impetus that pushes The Mountain forward, even though it is really Andy’s story. Sheridan’s performance is at times disturbingly stoic, leaving the audience in the dark as to his emotional state, however, with Alverson’s expert direction, Sheridan gives us just enough to empathize.

It is Lavant, however, who breathes life into the film in an explosion of emotion that livens up the final reel of the film and gives Andy the push he needs to move on with his life. Alverson’s last couple of films have explored the suppression of emotion from men who feel as though they aren’t appreciated or listened to enough, and what happens when that emotional levy breaks. Here Lavant bursts from an alcohol enhanced daze that numbed him to his own situation to deliver what appears to be a largely ad-libbed monologue on the need to express oneself and how life is bullshit, etc, etc… It is indulgent, for sure, but it also provides a much needed shot in the arm to the film that helps get it over the finish line.

A few years ago, The Comedy stumped critics and film fans with a kind of droll, but aggressively unfunny film; Entertainment carried on in the same vein as it followed a comedian who traveled what seemed like an endless road to oblivion on the road. The Mountain may deviate from Alverson’s preferred settings by moving the action into the past, but it maintains that stoic look at Americana in a different and perhaps less alienating way.

Much like Greek auteur Yorgos Lanthimos (Dogtooth, The Favourite), Alverson has a very particular vision of the world, and his work is developing in a way that very well may lead to similar success as Lanthimos. With this dip into higher profile casting, he’s certainly taking a step in the right direction, and The Mountain’s effectively droll delivery of Alverson’s philosophy really worked for me.

Review originally published during SXSW in March 2019. The film will open in select theaters in New York and Los Angeles on Friday, July 26, 2019, before opening in further cities nationwide in the coming weeks. Visit the official site for more information.

Do you feel this content is inappropriate or infringes upon your rights? Click here to report it, or see our DMCA policy.
Hannah GrossJeff GoldblumRick AlversonTye SheridanUdo KierUS

More about The Mountain