Review: Michael Dowse's STUBER Is A Wild Comedic Ride Through The LA Underworld 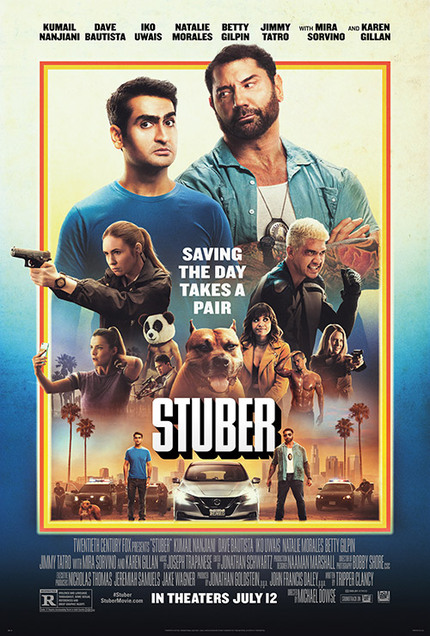 Kumail Nanjiani is either the luckiest or unluckiest Uber driver ever.

Nanjiani, who plays Stu the Uber driver, is joined by Guardians of the Galaxy vet, Dave Bautista as Detective Vic Manning, the above-mentioned wild card cop. Manning has been on the hunt for the elusive dealer, Tedjo (Iko Uwais) for years, and the case is about to get sent up to the feds if he can't crack it tonight. Not one to take failure lightly, Manning stumbles across a tip that a big deal is going down that night and there's no way he's letting this one slip through his fingers.

There's just one problem. The normally very self-sufficient Vic Manning just had Lasik surgery and his vision is less than optimal, which is where Stu comes in. Stu picks up the fare, and off they both go on a whirlwind tour of the most dangerous parts of Los Angeles trying to track down Tedjo and getting into all kinds of bloody, barfy, bombastic shenanigans for our benefit, and you know what? It's pretty fun.

Directed by Michael Dowse, whose Goon is an all-time favorite of mine, Stuber is a wonderfully zippy action comedy diversion that delivers laughs and thrills in equal measure, while managing to squeeze in a feel or two along the way. Not only is this an adventure story, it's also a family comedy as Bautista's Vic is also trying to connect with his daughter Nicole (Natalie Morales), who has begun to drift away from him after years of coming in second to his job. This plot thread, along with Stu's desperation to answer an emergency booty call, is woven into the action pretty seamlessly, making good use of modern technology as a method of developing the characters and story.

When it comes to comedies, though, it's all about the performances, and the on screen team here is a joy to watch. Bautista has proved himself to be a pretty decent straight man over the last five years with his breakout role as Drax in Guardians of the Galaxy, and to a lesser extent his recent charming turn in dystopian neo-noir Hotel Artemis. He continues the trend with Stuber, delivering an effortlessly charming performance as a hard-as-nails detective who has to learn to manage his work/life balance with the help of his Uber driver. Nanjiani, meanwhile, has honed a kind of "who me?" bewildered innocence to a fine point, and delivers a great performance that definitely earns plenty of sympathy and laughs.

In terms of action, Dowse doesn't skimp on the goods. Stuber gives the audience plenty of gags to keep the party rolling. Being an Uber driven (pun intended) feature, there are a ton of car chase sequences, including a final gag that really hits the spot, but there are also a ton of gory shootouts that action fans will dig. With Uwais in the mix, there are also a couple of decent hand to hand combat sequences, including a particularly poorly shot fight to open the film. Thankfully, it isn't Uwais only on screen exposure and he does get a second chance to show what he's got, though I think he's a bit wasted as an actor here.

Stuber is a really fun ride and a great way to pass ninety minutes with plenty of action and gags to keep the audience in stitches throughout. Bautista and Nanjiani make for one of the most fun movie odd couples since Schwarzenegger and De Vito, and I'd definitely pay to see more of that combo. This is a solid Hollywood debut for Canadian cult comedy icon, Dowse, who definitely deserves more mainstream attention.