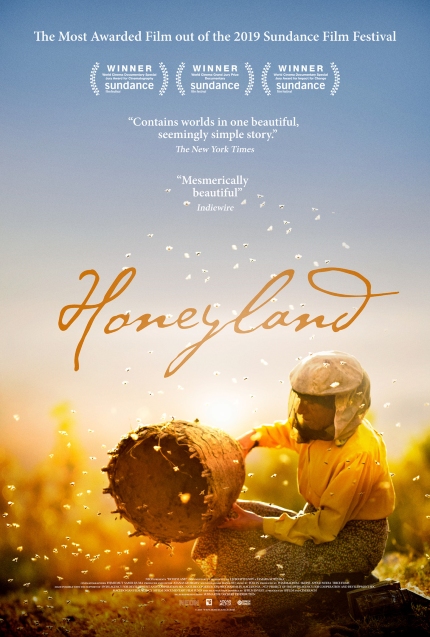 With the sun gorgeously settling in on the valley, she makes her way back to the isolated homestead she keeps with her infirm octogenarian mother. It is a hillside farm of rocky ruins, scrubby grass and bony tress, but Haditze scratches out a living of sorts from the pure, unmodified, honey of her hives, which she nurtures on the premises and sells directly to the food markets in Skopje, Macedonia's capital city, which is several kilometers away; walkable but far.

With no running water, or electricity, something as simple as a banana or hair dye is the height of luxury. Haditze's world and her livelihood are about to face a significant challenge, one that will be captured by an astute camera (The Sundance Film Festival bestowed a cinematography award to the film's pair of shooters, Fejmi Daut and Samir Ljuma, for good reason) and an eye for symbolic moments.

Honeyland is a marvel of a documentary, one that feels more like a narrative slice of tragedy as any kind of typical 'issue' documentary, as the characters and their drama take the foreground. The film offers evidence to the truism that bad neighbors are everywhere - even in the lonely plateaus of Macedonia.

When a Turkish family moves into Haditze's (ample) space, she is shown, surreptitiously popping her head above the stone wall at the edge of her property.  A Turkish man, Hussein, arrives with his small herd of skinny cattle, and a caravan full of children, junk, and chickens. The serene environment is shattered, possibly irrevocably, over 85 minutes of ecological tragedy.

Somehow, the entire scope of the human condition is encapsulated, wholesale, into a single compact, but living, breathing, story. And like all the best stories, this one seems to exist independent to time and place. Airplanes are seen to occasionally fly overhead, a sharp contrast to the simple farmstead that could have existed several centuries ago.

Tamara Kotevska & Ljubomir Stefanov have crafted a marvellous piece of non-intervention here. There are moments of exceptional intimacy, particularly with Haditze and her mother in extreme close-up, subsisting or arguing with one another. Equally so with Hussein, his wife, and their myriad hellion brood.

When Hussein gets wind of the bee keeping operation, he starts a parallel, rival, set of colonies, and his stewardship is one of the 'quick buck' variety, utterly at odds with Haditze's philosophy of 'half the honey for the bees, half for the harvest.' Unspoiled open nature, grass, plants flowers, is good for the bees, piles of garbage and human detritus are not. As a species, we are still animals, social or otherwise, smearing the landscape with our tools, garbage, and schemes.

It is not long before full-on conflict rears its ugly head. Hussein's bees are starving, and attacking Haditze's colonies. Her early attempts to befriend, sing and teach his children, result in strained relationships and eventual betrayal. Images of bees wrestling, drowning, and stinging act as visual metaphor, essayed in stark cinematic terms.

What Haditze touches turns into delicate gold, but the lazy, noisy Hussein clan have the reverse Midas touch, where everything turns to shit and tears. At one point the children are seen playing with a Turtle in a stone tub, the animal trapped in a barren basin. Perhaps Hussein and his wife are not the villains here, but simply struggling with circumstance. Perhaps not.

There is a rather unique tension between the viewer and Honeyland. Because this is a documentary which unfolds in the style of a narrative, at times, I found myself 'rooting' for the filmmakers to break the fourth wall to intervene against the all too predictable 'human shitshow in slow motion.' Instead, they are flies one the wall, but highly observant flies. Faces like these, young and old alike, almost rarely appear in even the best fictional cinema. The 'acting' here, as one would expect from non-actors living their lives, is utterly natural and without guile.

Honeyland is its own kind of melancholy miracle, and a testament to this kind of patient documentary filmmaking. The small crew spent several years shooting in the area. I am guessing the original focus was on 'the last female beekeeper in Europe' angle. While that is certainly in the film, the events they capture are infinitely more substantial.

I do wonder what Haditze thinks of the events depicted in the film. Probably very little. She is a survivor, and at the end of the film, feels both fragile and mythic, trudging off into the sunset with her canvas backpack of bees, and her heavy skirts, which, if you look closely, are patterned to look like a swarm of the tiny creatures who are her sustenance and livelihood.

Review originally published during HotDocs in May 2019. The film is now playing in select U.S. theaters via Neon.