We are getting close to the much-anticipated eight edition of the Los Cabos International Film Festival, to be held from November 13 to 17. Right now, the Mexican festival – which last year screened such great films as Mandy, Lords of Chaos, BlacKkKlansman and Border – is calling for entries for both its Official Selection and its Gabriel Figueroa Film Fund (for projects in development).

I spoke recently with Maru Garzón, the festival’s artistic director, who assured Los Cabos is “looking to maintain its profile, regarding the duration [five days] and the curatorial proposal, which has worked quite well.” 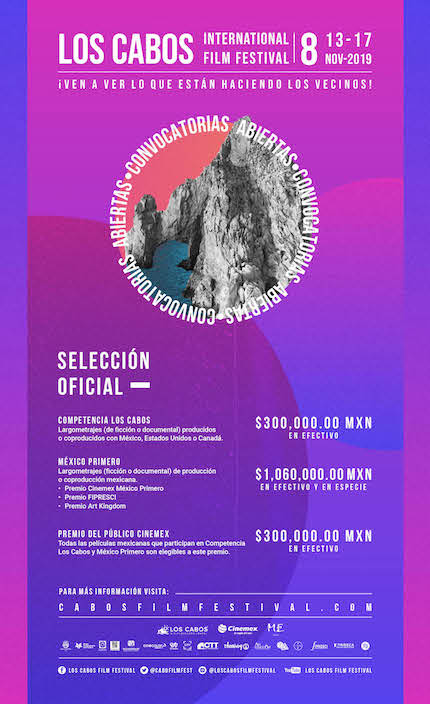 In that sense, the 2019 Official Selection is divided again in two categories: Competencia Los Cabos and Mexico Primero.

The first one is for feature-length productions or co-productions from Mexico, the United States or Canada, with a prize of $300,000 Mexican pesos for the winning movie’s producer.

The other one is only for Mexican films and has three different awards: Cinemex Mexico Primero Award ($300,000 Mexican pesos for the director), the FIPRESCI Award and last but not least, the Art Kingdom Trailer Award (a marketing campaign worth of $760,000 Mexican pesos).

“As far as Mexican, American and Canadian cinema goes, we are looking for those films that took certain narrative and visual risks to offer a unique view of the stories they are telling, though we are not an experimental cinema festival. We always look for films that both the critics and the general audience can enjoy”, added Garzón. 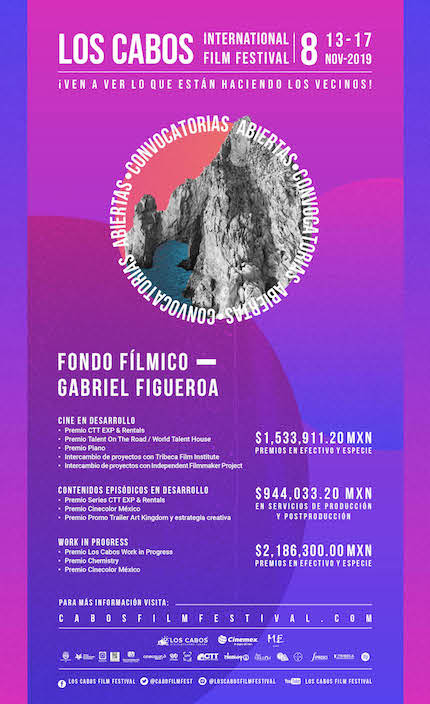 The latter is particularly notorious because it evolved from the previous TV Series in Development division, and now welcomes “series, web series or episodic content projects for TV or digital platforms: OTT, streaming, social media.”

According to Garzón, Los Cabos “will remain a film festival, however we don’t ignore the fact that there are other ways in which stories are being told and different formats aside of the big screen to see these stories.

"The majority of these projects are done by filmmakers, I think in that sense there has been a very positive evolution, because not long ago I remember that filmmakers were sort of ashamed of working in TV, but now these proposals are worthy as they involve an author voice and an esthetic quality. We have a friendly coexistence with all of this, we want to support these projects as long as they have the quality characteristics.”

You can check the full details for each and every category in the festival’s official site. Just keep in mind the deadline for the Official Selection entries is August 27 and for the Gabriel Figueroa Film Fund is August 17.

Do you feel this content is inappropriate or infringes upon your rights? Click here to report it, or see our DMCA policy.
Los Cabos 2019Los Cabos International Film Festival