Fantasia 2019 Review: JESUS SHOWS YOU THE WAY TO THE HIGHWAY Will Smash Your Brain To Pieces 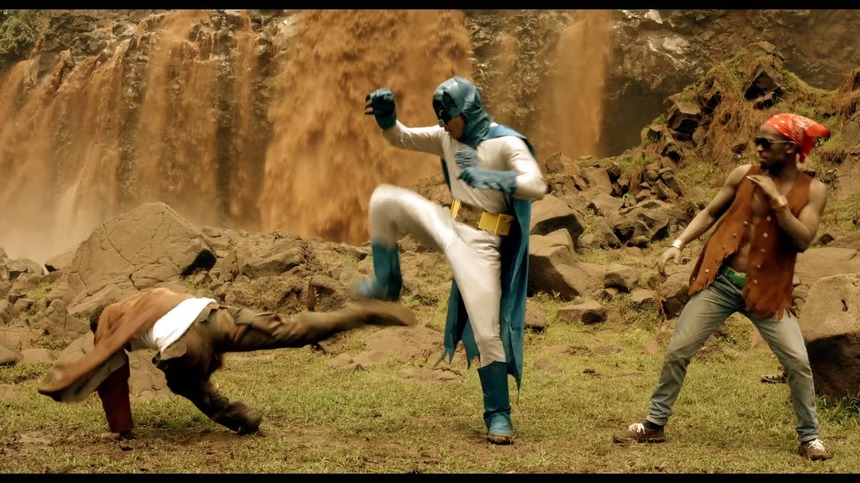 Truly original artistic voices are few and far between. When it comes to contemporary genre cinema, a few innovators come to mind when one thinks about the 21st century. Filmmakers like Khavn from the Phillippines, Q from India, Sono Sion and Ujicha from Japan, and Hélène Cattet and Bruno Forzani from Belgium have carved their own paths through a cinema jungle filled with overwhelmingly similar material. A new voice has emerged to join those ranks over the last few years, Miguel Llansó, a filmmaker whose low budget afro-futurist science-fiction film Crumbs surprised the festival circuit a few years ago. Now Llansó is back with his second feature, Jesus Shows You the Way to the Highway, and it is every bit as bizarre and unique as one might hope.

In an alternate near future, the city of Tallinn has become a megalopolis governed by a computer program called Psychobook. When a mysterious virus known as the Soviet Union attacks Psychobook, personified by a bizarre avatar wearing a Stalin mask, it's up to CIA agents Palmer Eldritch (Augustín Mateo) and D.T. Gagano (Daniel Tadesse) to go into the Psychobook and wipe it out, but soon Eldritch bails out and Gagano becomes trapped. Transported to an alternate-alternate reality known as Betta Ethiopia where he has to get to the bottom of this dangerous game all on his own, or so he thinks.

Encounters with a kung fu Batman knock-off and a pair of Tokusatsu ready anthropomorphic flies put Gagano on the defensive. Soon he realizes however, that one of the man-flies is really a helpful man who calls himself Jesus Christ. The two of them work together to get back to the highway that could possibly lead Gagano back home.

All of this is in-between communiques between Gagano and his holographic Man Friday, Jiminy (Aris Rozentals), who tries to keep Gagano connected to the outside world and up to date on the progress of his mission. There's also a subplot in which Gagano is desperate to retire so he can open a pizzeria and his (maybe unfaithful?) wife, Malin (Gerda-Annette Allikas) can open her own kickboxing studio. Mystery, intrigue, and wackadoo kung-fu insanity are just the beginning as Llansó throws in a little bit of everything, including the kitchen sink to make this one of the most original features of the year.

Even beyond the loopy plot elements and wacky characters, Llansó's vision is pretty insane, sometimes to the point of incomprehensibility. The retro-futuristic tech reminds one of Thunderbirds Are Go or more recently Australia's Danger 5 TV series with its Cold War trappings. Once inside Psychobook, all performances are a bizarre combination of live-action and stop motion, with actual actors performing one frame at a time. In order to emphasize the fact that these actors are actually avatars, each performers wears a black hood with a paper cutout face mask, Gagano, for example has chosen Richard Pryor as his avatar. It takes a minute to get used to, but so does everything else in this weird little adventure.

Jesus Shows You the Way to the Highway is everything the adventurous film fan is looking for. It is complex, original, fun, funny, and unlike anything you've ever seen before. Putting an insane idea like this one film is hard enough, but doing it in a way that is compelling and entertaining is an even bigger test, and Llansó proves himself to be up for the challenge. We are lucky to witness the birth of a truly original cinematic voice with Miguel Llansó, I just hope the world is ready to embrace him and give him the space he needs to grow even more.

Jesus Shows You the Way to the Highway premieres at Fantasia on Thursday, July 18th