Criterion October 2019 Highlights Include MATEWAN, HAXAN, WHEN WE WERE KINGS 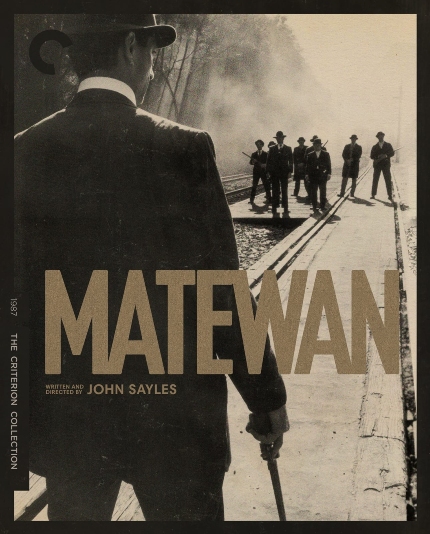 John Sayles made his directorial debut, Return of the Secaucus Seven, in 1979, and followed that up by making Lianna (1983), Baby It's You (1983), and The Brother From Another Planet (1984), a remarkably diverse string of films.

A filmmaker who put his money where his mouth was, Sayles labored as a renowned rewrite artist for mainstream Hollywood scripts, but he always made his personal passions clear in the films that he directed. After the quartet mentioned above, he next turned his attention to Matewan, an ambitious and completely absorbing historical drama about organized labor. Now that the film is heading to Blu-ray on Criterion, this edition sounds absolutely essential. Here is Criterion's description:

"This wrenching historical drama recounts the true story of a West Virginia coal town where the local miners' struggle to form a union rose to the pitch of all-out war in 1920. When the town of Matewan's miners go on strike, organizer Joe Kenehan (Chris Cooper, in his screen debut) arrives to help them, uniting workers white and black, Appalachia-born and immigrant, while urging patience in the face of the coal company's violent provocations.

"With a crackerjack ensemble cast, including James Earl Jones, David Strathairn, Mary McDonnell, and Will Oldham, and Oscar-nominated cinematography by Haskell Wexler (In the Heat of the Night), Matewan taps into a rich vein of Americana with painstaking attention to local texture, issuing an impassioned cry for justice that still resounds today."

Casting long shadows over the entirety of horror-movie history, Haxan is the sort of title that self-professed horror-movie fans need to insert into their DNA; once done so, the film will be impossible to forget. Once again, Criterion says it better than I can:

"Grave robbing, torture, possessed nuns, and a satanic Sabbath: Benjamin Christensen's legendary silent film uses a series of dramatic vignettes to explore the scientific hypothesis that the witches of the Middle Ages suffered the same hysteria as turn-of-the-century psychiatric patients. Far from a dry dissertation on the topic, the film itself is a witches' brew of the scary, the gross, and the darkly humorous. Christensen's mix-and-match approach to genre anticipates gothic horror, documentary re-creation, and the essay film, making for an experience unlike anything else in the history of cinema."

(Specifics are detailed by Criterion at their official site.)

Filmmaker Leon Gast served as a 'fly in the wall' in Zaire as he documented a music festival that was meant to serve as a backdrop to the so-called "Rumble In The Jungle," a championship boxing bout between Muhammad Ali and George Foreman. As Criterion points out, Gast "wound up amassing a treasure trove of footage, capturing the wildly charismatic athlete training for one of the toughest bouts of his career while basking in his role as black America's proud ambassador to postcolonial Africa."

It's a fabulously entertaining film with a compelling star and a fascinating setting. As a bonus, interviews with Norman Mailer and George Plympton, two major figures in my younger 70s years, figure prominently.

(Read more about it, right here.)

Beyond his work starring Marlene Dietrich, I'm afraid I'm not terribly familiar with director Josef von Sternberg's films. Per Criterion's prepared statement: "Vienna-born, New York-raised Josef von Sternberg (Shanghai Express) directed some of the most influential and stylish dramas ever to come out of Hollywood. Though best known for his later star-making collaborations with actor Marlene Dietrich, von Sternberg began his career during the final years of the silent era, dazzling audiences and critics with his films' dark visions and innovative cinematography.

"The titles in this collection, made on the cusp of the sound age, are three of von Sternberg's greatest works, gritty evocations of gangster life (Underworld), the Russian Revolution (The Last Command), and working-class desperation (The Docks of New York) rendered as shadowy movie spectacle."

The collection sounds like a great place to start exploring von Sternberg. More information is available at the trusty Criterion website.

Do you feel this content is inappropriate or infringes upon your rights? Click here to report it, or see our DMCA policy.
CriterionCriterion Blu-rayCriterion CollectionJohn SaylesJosef von Sternberg