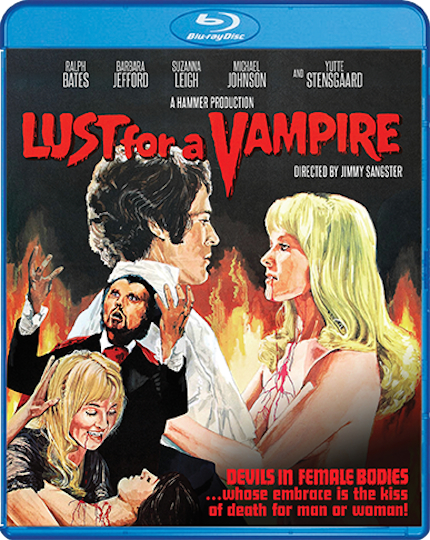 Continuing in their tradition of adding Hammer Horror to their roster, the genre imprint of Shout! Factory (Scream Factory) releases Lust for a Vampire in North America on July 30. The new Blu-ray for this 1971 film was directed by Hammer stalwart Jimmy Sangster (Horror of Dracula, Horror of Frankenstein, Maniac) and a few of the other usual suspects, like actor Ralph Bates (Horror of Frankenstein, Dr. Jekyll & Sister Hyde).

The film takes place at a girl's school, which is funny, because the actresses are clearly all in their early 20s or past the usual college age. They also wear late '60s-style hair and make-up and parade around in see-through gowns during a dance sequence --- which a man is allowed to watch during the 1830s, so who am I to joke about inaccuracies?

Anyway, Mircalla enrolls at this stately finishing school of sorts for reasons, hunting reasons and probably because she's bored. One of the teachers, Giles (Bates), figures out that Mircalla is really Carmilla Karnstein, a centuries-old vampire. He confronts her, but instead of being a Van Helsing type, he wants to be her Renfield. She simply stares at him after sucking the blood out of him, and it's actually kind of sad. I mean, who wouldn't want a devoted man servant? Perhaps it's because she's a coded lesbian, but come on, it's hard to get good help these days.

Rumor has it that the original Carmilla, played by Hammer star Ingrid Pitt, who played the role in The Vampire Lovers, didn't like the script, and therefore turned down the role. I can't blame Pitt, because Lust for a Vampire is a mostly rote, by-the-books Gothic horror with nothing new to offer, even by 1971. Seriously, you'll see everything coming, for the most part, and there's even a scene with angry villagers and torches.

Sound is lovely. Save for a sequence or two, this Blu-ray release looks stunning. It really is amazing what distribution companies can do these days with cleaning up pictures; this new 4K restoration is drop-dead gorgeous. And you have a choice of watching the film in two different aspect ratios, as well, plus a commentary by Sangster, Leigh, and Hammer expert Marcus Hearn.

I'd say this one is for Hammer completists, but that doesn't mean there's no fun in the film, and it does look fantastic. If you'd like to add Lust for a Vampire to your horror movie Blu-ray collection, check out Scream Factory's page for the film here.

More about Lust for a Vampire