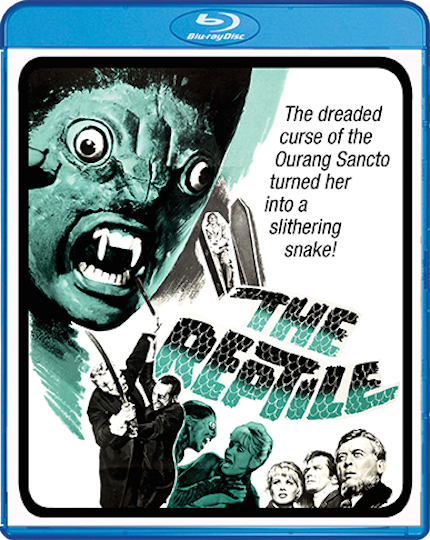 Directed by in 1966 by John Gilling (The Saint), The Reptile is one of two Hammer Horror films released today (July 30) by Scream Factory. (The other is Lust for a Vampire.) This film is a hard one to describe, but I'll try.

A small Cornish village sets the scene, where strange deaths take place, one after the other. Victims are found blackened after having been bitten and having foamed at the mouth. Harry Spalding (Ray Barrett, Terror From Under The House) arrives to the village to investigate the death of his brother, who died in this horrific manner, of course. He takes up residence with his wife, and naturally, the superstious townspeople won't talk to him until they're forced to, with the bodies piling up here there, and everywhere.

At the center of all of this strangeness is a sad, needy neighbor Anna (Jacqueline Pearce, Doctor Who), the daughter of a grim-looking doctor who's got something to hide. Spoilers for a film several decades old: in this case, it's the fact that his daughter turns into a snake woman. Her bites cause a sort of Black Death-like agony, which unfortunately is portrayed by some very bad, laughable makeup --- it looks like the sort of make-up crayons you can buy at a Halloween supply store.

The most interesting part of The Reptile is a scene wherein Anna plays the sitar for her father, and Harry and his wife, as well as this strange Indian Svengali sort of man. But the manner in which she plays it becomes kind of shocking. Anna's face and mannerisms become quite rebellious as the music becomes more intense. And the way she stares her stern doctor-father down becomes so uncomfortable that it makes you wonder what their relationship really is. It culminates with the doctor grabbing the sitar and smashing it against the wall.

The rest of the film is more or less the same kind of Gothic-folk horror blend that Hammer is known for; sometimes the film is silly, other times, it's not. I can't actually decide if I like The Reptile or not, but the picture looks great for the most part, and sounds great, as well.

Let's get to the bonus features! Just Lust for a Vampire, you can also watch The Reptile in two different aspect ratios if you so desire. The interview with first AD William P. Cartlidge was somewhat dry, but also sometimes funny, as Cartlidge recounts some of the weird memories with a bit of wry sarcasm.

The making of the film featurette is interesting, and it was great to hear the departed Oliver Reed (Women in Love, The Brood, The Devils) narrate the "Wicked Women" episode of the old World of Hammer, which featured a look into some of the most wonderful lady villains in the Hammer filmography, like Bette Davis.

Want to add this Blu-ray to your collection? See the trailer, learn more, and order The Reptile over at Scream Factory here.

Do you feel this content is inappropriate or infringes upon your rights? Click here to report it, or see our DMCA policy.
Blu-rayHammer horrorJohn GillingScream Factory

More about The Reptile

More about Lust for a Vampire