Review: YESTERDAY, A Truly Fab Tale Full of Magic, Mystery, and a Tour 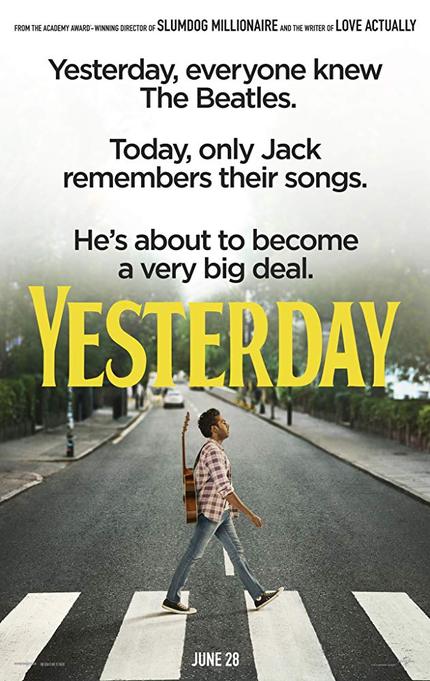 In Danny Boyle’s new music-driven romantic comedy, Yesterday, a long-struggling singer/songwriter wakes up to discover that he’s the only one who remembers The Beatles.

The fact that a premise that stupid works so well here can only mean that this, is in fact, a pretty great movie.

It’s true.  Yesterday, I assumed Yesterday to be nothing but the latest attempt at usurping the music of The Beatles to yet again fuel some movie that the world would be better off without.  (And a particularly reaching attempt, at that).  Today, it looks as though I’m here to say that Yesterday is just about note perfect.

Boyle, engaging his winningest utilitarian skills, has brought forth what feels like the best Richard Curtis (Love Actually, Four Weddings and a Funeral) movie in quite a while.  This may come as no surprise, in that Richard Curtis bears sole writing credit for the screenplay.  Yesterday, to its foundation, is witty and sharp, light but not wispy, invigorating and satisfying, and overall, simply outright charming.

As culturally entrenched as The Beatles songs are, the notion that all of it could come from one guy all at one time should strike us as preposterous.  Members of The Beatles had been known to acknowledge that it was possible for all the talent, vision and personality of their band to be contained to a single musician- it just wasn’t any of them.  That man was their friend, the late, great Harry Nilsson.  It was, most assuredly not, Jack Malik.

Jack who...?  If you don’t recognize the name Jack Malik (and why would you?), you’d be right at home in the early Act One world of Yesterday.  It true, yesterday Jack Malik was just another singing schlub with a bit of talent, a guitar, and some decent songs.  But that’s not all he’s got. He’s also got Ellie (Lily James, adorable).

Despite her being his de facto manager and being in his corner since seeing him play “Wonderwall” as teenager in a talent show, they’ve remained platonic for all this time.  It’s quite clear that this longstanding norm is frustrating for Ellie, who secretly but obviously wishes Jack would love her.  But Jack is too hyper-focused on his own creative grind to notice.  That old tune.

But then, some sort of unexplained twelve-second global blackout occurs, and the world’s most prominent batch of old tunes simply blips out of existence.  (Just go with it).  So yeah, yeah, yeah... suddenly, The Beatles aren’t even half of half the band they used to be.  They’re no longer the walrus, they’re no longer the eggman.  They’re just toast.  Everything’s all flippy flongo wringy wrongo .  Downright goo goo g'joob.

Jack, though, having the providential misfortune of being knocked out during the twelve seconds in question, still remembers.  Well, mostly.  He’s still sketchy on some of the lyrics.  But that’s okay, so were John, Paul, George and Ringo sometimes.  This was a band that needed one another in ways the world is still trying to comprehend.  The Beatles were and are great apart, but together, the band is a thousand times the sum of its parts.  Everyone knows this -- or in this case, knew it --but that doesn’t stop Jack from reluctantly bringing the songs back into the world as a solo act.  As his songs.

Try as he might, there’s no coming clean.  Which is just what the devil wants.  Or, in this case, Kate McKinnon.  McKinnon, that SNL firebrand and big screen wild card, plays a money grubbing industry bigwig who’s got her sights set on the inevitable fortune that everyone knows is just around the bend.  So often in the past she’s acting as though she’s in her own little movie apart from the one she’s actually in.

This time, though, McKinnon’s trademark acerbic absurdity somehow works better than it ever has.  She’s the wrong note looking to sink a beautiful harmony, which is the point.  And it helps that she’s hilarious. 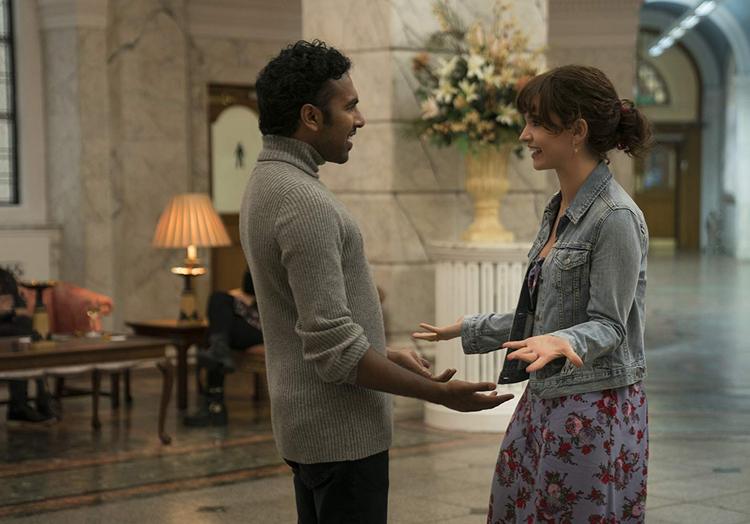 But before that, though, Jack and his new songs must be discovered.  One of Yesterday’s great comic observations is that so many people just don’t know good music when it’s right front of them, and are subsequent unwilling to momentarily shut down the world around them to engage with it.  When Jack tries in vein get past the first verse of “Let It Be” as he 'debuts' it for them, the litany of distractions takes on a form of comedy torture.

It eventually takes a pop star’s trained ear to realize the quality of Jack is singing.  Enter Ed Sheeran, playing himself.  He’s a great sport and quite funny in the role, even if he is saddled with that old bit about changing “Hey Jude” to “Hey Dude”.  Sheeran wants to take Jack with him on tour, here, there, and everywhere.

Jack, in his pre-Beatle career, was an innocuously earnest kind of singer/songwriter who couldn’t draw a crowd of stick figures.  Neither a mod or a rocker, he truly is, as Ringo once joked, a mocker.  Or is he something more?  Himesh Patel, emerging to the big screen not unlike his character emerges within the music scene, is a wonder.  Tasked with carrying this movie, itself brought forth from a ridiculous sounding concept, Patel proves to be the right guy.

If The Beatles’ songs are love, and if the love you take is equal to the love you make, then Jack Malik is the world’s greatest love machine.  Except, he’s been working like a dog so hard, his love life’s been sleeping like a log.  Somewhere in all of this is a refreshing reminder to savor the beauty we have in life, and how even fun little pop songs of an era gone by are a gift.

That’s true even as big movie studios release sweet little Yesterday into a disastrously competitive summer box office race in hopes of the music of those four mop-tops from Liverpool once again conquering all.  But if ever there was a moment when we could use a little love conquering all, it’s now.  Indeed, love is all we need.

The Beatles music will live on whether or not people like Danny Boyle and Richard Curtis make movies about it.  But of all the other silly movies that have attempted to cinematize the band’s magical mysterious catalog, not manage as well as this one (perhaps sans the band’s own A Hard Day’s Night).  Possibly, this is because the film doesn’t strive to wring a plot from the lyrics of the songs, but instead is simply a reminder of how great the songs are; these songs we so easily take for granted.