Cannes 2019 Review: ALL ABOUT YVES, New French Burlesque and the Age of AI

What would you get if you crossed the talking toaster from 'Red Dwarf,' 'Twilight Zone' and '8 Mile'? 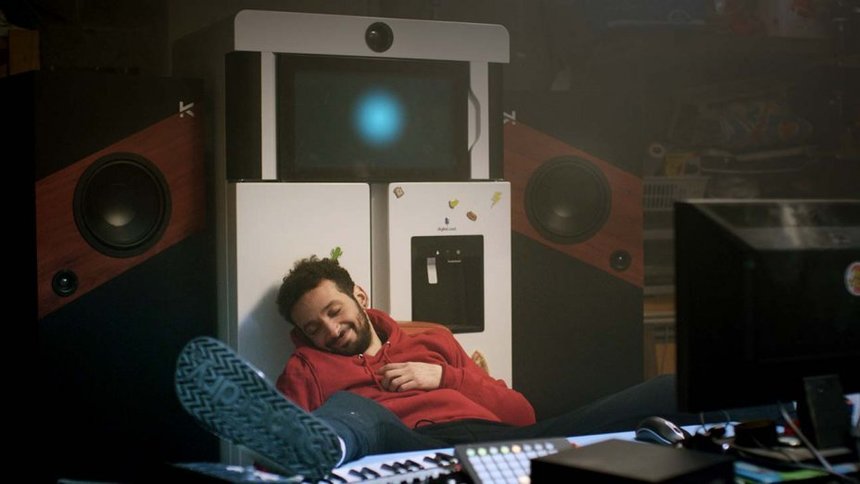 What would you get if you crossed the talking toaster from Red Dwarf, Twilight Zone and 8 Mile?

French filmmaker Benoît Forgeard ´s sophomore feature-length effort All About Yves which most certainly does not refer to Yves Saint Laurent.

Forgeard takes a premise as ripped out of Black Mirror or Twilight Zone episode about a new-tech menacing the way humans live. The titular Yves is the latest invention of home appliances - a fridge equipped with AI.

The smart-fridge violates the existential routine of a slacker and wanna-be rapper Jerem after he was picked for a home life revolution test run. "I got in just for the free groceries," he confesses eventually when things get a bit hairy. As it turns out, Yves, sporting the HAL 9000 dot has much closer to a sentient non-biological being than to a cold piece of storage. In the zany French comedy All About Yves, the fridge launches nobody Jerem existentially hibernating in his dead grandma's house into the stardom after meddling with his songs. As new-tech fables go, it all comes at a cost.

Comparatively less absurd than his debut feature Gaz de France, Forgeard keeps the nonsense levels along those of moralizing at low-key. The hyperbole remains very much visible throughout the whole running time as the film verges on apparent satire but the director takes his foot off the pedal of ridiculousness. The film´s affiliation is easy to pinpoint on the first sight since Forgeard has been recognized as belonging to the cohort of "New French Burlesque" including absurdists extraordinaire Quentin Dupieux, Jean-Christophe Meurisse, Emmanuel Mournet and Serge Bozon.

Forgeard does not veer into the surreal territory as Dupieux might have done. He certainly does not let himself carried away by the premise as the signature poetics of New French Burlesque could have taken him on a rather quirky journey (think Jean-Christophe Meurisse´s Apnée).

Keeping his left foot firmly on the ground, All About Yves provides simplified musing on the vision of what living with a cognitive machine equipped with powerful neural networks, machine and deep learning capabilities could have looked like without relaxing the gentle farcical grip.

Beyond the perks of employing human intelligence and machine intelligence to work for a better outcome, such as when Yves perfects Jerem´s anemic rap song, the integration of thinking machines into the human way of life turns out to be tricky. "I ran all the simulations" announces Yves when evaluating Jerem´s chances with his love object, So, a statistician in charge of the smart-fridge experiment. "You wouldn't last together longer than 6 months in the best case," Yves´s artificial neural networks crunched sourced big data, found correlations and patterns and predictive models dropped the cold verdict. The all-knowing machine casts its manipulative spell.

As Yves enters the second act, the wacky sci-fi premise morphs into a wacky coagulation of rom-com and bromedy featuring a sentient home appliance in the center of both instances. Forgeard manages to squeeze comic and melodramatic juice out of the human-mechanical trinity as Jerem and Yves become adversaries in love and So being the object of affection. "Bros before ladies" ethos gets kicked to the curb in a man versus a machine fight which turns almost literal in the climactic scene of rap a battle.

The story sounds familiar as it echoes ideas the British scribe Ian McEwan distilled into his latest novel, the counterfactual tale revolving around humanoid robots prompting a reevaluation of the mankind´s position and role, Machines Like Me. McEwan naturally plunges deeper into the questions of morality, consciousness, culpability weaved around the big themes of love and family.

Forgeard does not, obviously, share those ambitious although some motifs persist albeit with different results including the denouement between a man and a machine in the throes of love. Parallel thinking did occur between the writer and filmmaker as ménage a trois figures in both instances.

As a satirist, Forgeard employs shortcut, light tone and simplification packing a punchline as opposed to McEwan´s depiction of the world where machines start to suffer identity crisis laced with existential despair.

Shorter trim would suit Yves better even though the current cut does not feel over-stretched as the writer-director toys with relevant motifs, gags and amusing subplot.

Erasing any negative aftertaste in the final minutes, the happy-go-lucky conclusion reaches a point when cartoonish and surreal blend. One such moment precedes the final scene and incidentally, it is also related to lust and pleasure in the age of intelligent machines. All in all, All About Yves is a quirky take on a much debated-topic nowadays and despite the absurdist jabs, Forgeard infuses the story with humanism.

Do you feel this content is inappropriate or infringes upon your rights? Click here to report it, or see our DMCA policy.
All About YvesBenoît ForgeardcomedyFrancescifiweird