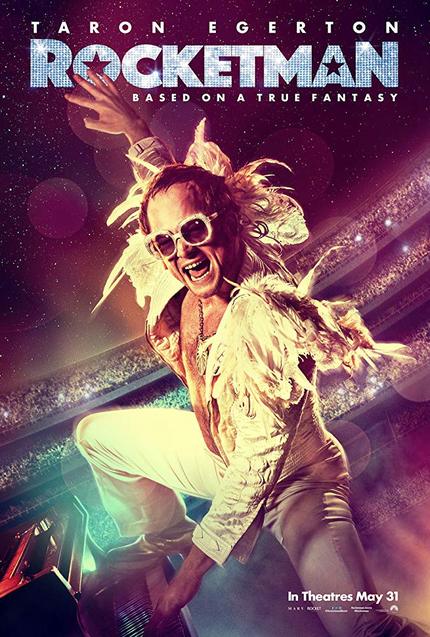 Elton John has never been one to do things in half measures.  Trained as a classical musician from childhood, he’s spent his life hitting all possible measures.

Rocketman, the latest rock musician biopic to drop into multiplexes, fully follows suit— the suit being massively sequined and wildly feathered. Though the story of Elton John (née Reginald Dwight) is one not yet ended (the aging singer claims to be retiring from touring in 2021; considering that he’s apparently had more than one previous farewell tour, we shall see about that), the real life arc that’s played out over the years lends itself rather impeccably to the familiar standing biopic template: Artist of moderately humble means with parental issues and unusually amazing talent makes it very big very fast, loses sight of himself, falls prey to destructive excess and career predators, triumphantly course corrects, with iconic hit songs every step of the way.

Dexter Fletcher’s Rocketman is no exception whatsoever to the model, though as opposed to the other major rock biopic Fletcher was recently involved with (that would be Bohemian Rhapsody, which he was hired to save in the final stretch of its troubled production), one often times needs to squint to see it’s conventional bone structure.

The active comparisons between Rocketman and Rhapsody are, by the way, entirely warranted.  Their subject similarities, formal similarities, shared pedigree, and close proximity practically beg for it. Though both films were likely coming about concurrently, or concurrently enough, that any accusations one ripping off the other would be rendered logistically moot, Rocketman nevertheless bursts onto the scene half a year following Bohemian Rhapsody knowing that it has some friendly one-upmanship to accomplish.

And, it does. Rocketman is the better film in nearly every way: a boast for some that may seem like not saying much, but let us not forget that the Freddie Mercury/Queen biopic has earned over $900,000,000 worldwide, somehow won the big prize at the 2018 Golden Globe Awards, took home more Oscars than any other film last year, and made a major star of its leading man, Rami Malek. Rocketman, being the same thing but far superior, would seem to be poised for even greater success/excess.

Pin the first medal on the starless film’s star, Taron Egerton (Kingsman: The Secret Service).  Egerton does everything that Malek did and then some, actually singing the songs on screen.  Though this critic wouldn’t go as far as Elton John has when he recently proclaimed Egerton his best vocal surrogate ever, he is awfully good in that department, though not perfect.

The emotional bombast is present in every frame, though the actor often lacks John’s signature verbal bite, as well as his unique pronunciations. Indeed, after the film, a fellow critic observed that for the first time, he could understand certain lyrics of songs he’d been hearing all of his life.  Agreed fully, making Rocketman perhaps even more revelatory than intended when it comes to songwriter Bernie Taupin’s celebrated lyrics.

Taupin, as played by Jamie Bell, shines as the obligatory grounded heart of the film.  He’s Elton John’s lifelong collaborator, writing the songs in one room while John would work them out in another. Our protagonist couldn’t do the great things he does without him, and when the time comes to set John’s jerky high-as-a-kite ass straight, the earnest Taupin in the man for the job.

How accurate Rocketman is on its handling of The Facts isn’t for this critic to say, though one thing is for sure, the dazzling choreographed in-world musical numbers that occur throughout the film didn’t really happen. And this is where Fletcher bursts free of the rote re-enactment mentality that consumes Bohemian Rhapsody and so many others, earning its ballyhooed self-classification as a 'musical fantasy.'

By allowing the outside world to burst into song from the get-go (Elton John hits that wouldn’t chronologically exist yet, at that), Fletcher weaves a dynamic panoply of famous rock moments (John’s gravity-defying debut at The Troubadour; his taking the stage in a sparkly Bob Mackie-designed baseball uniform for his 1975 sold out Dodgers Stadium performances), any expectation of docu-truth is evaporated, and permission is hereby granted for the filmmakers to cut loose.

And cut loose they do. Whatever budgetary savings Rocketman accrued by not hiring any major movie stars, it very much appears to have spent on the central character’s wardrobe. Legitimately out-glaming the real things, Egerton’s outfits are fearlessly, positively mad. The sheer unapologetic opulence of Elton John isn’t skimped upon, even as the singer’s humanity remains front and center.

If there’s a nit to pick around here, it’s that the woe-is-me sad sack moments pile up too high too fast.  But then, their ultimate resolution is a whimsical grace note, one which can be taken away by many a viewer in search of inspiration in reconciling their own seemingly irreconcilable issues.

Rocketman is many things: a true story, a somewhat edgy musical fantasy, an outwardly gay journey, a standard issue biopic, and yet another self-aggrandizing spotlight for Elton John (who was actively involved as an executive producer). But above all of that, it is a winning rock n’ roll movie that will rightly make a major star of Egerton, and finally put Fletcher on the map stateside as a directorial talent to be reckoned with.  Oh no no no, they’re the Rocketmen. And I think it's gonna be a long, long time.