REVIEW: Poms is nothing to cheer about in this rudimentary rah rah comedy 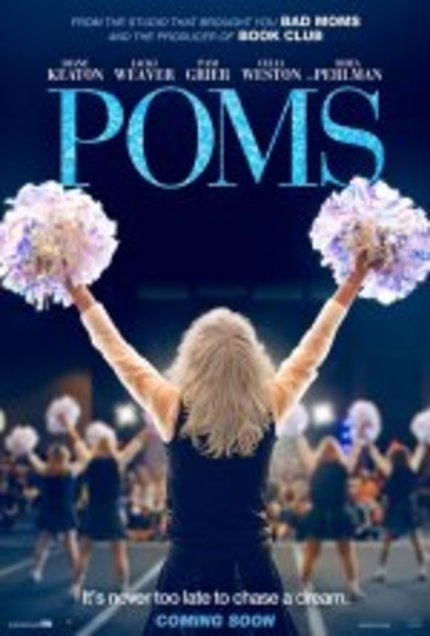 Here is a thought: Cheerleader Camp meets The Golden Girls without the slashing of throats. How about Bring It On: The Geriatric Years? Okay, perhaps it is not the PC thing to knock a manufactured, misguided movie about aged cheerleaders finding their sense of liberation in a retirement home. However, what can be chastised are the oldster pom pom girls being portrayed by some of Hollywood's treasured and decorated actresses toiling in this cramp-induced comedy of rudimentary retiree rah rah chuckles. Director Zara Hayes (responsible for the highly underrated dramedy Battle of the Sexes) helms Poms, the silly-minded chuckler that needs to be rejected from the try-out squad.

Predictable and pointless, Poms does not want to celebrate the vibrant spirit of these advanced aged ladies overcoming the restrictions of partaking in a perceived youth-oriented event. Instead, Hayes and screenwriter Shayne Atkinson concoct an embarrassment of giggles that look to ridicule rather than uplift the message about golden age achievement. Nonsensical and infantile, Poms is about as appetizingly humorous as extra waxy floors within the broken hip unit at a nursing home facility. This dismissive material has no regard whatsoever for the older women's genuine spirit or self-discovery. How heartbreaking to see such a talented cast waste away in this ridiculousness. Oscar-winner Diane Keaton (who has seen her share of flimsy flicks), Emmy-winner Rhea Perlman, former blaxploitation beauty Pam Grier, Silver Lining Playbook's twice Oscar-nominated Jacki Weaver, and veteran TV/film character actress Celia Weston--all are paraded around in this flaccid farce.

Martha Walker (Keaton) is the New York-based senior citizen and former school teacher that decides to leave the big city for the Georgia-based Sun Springs retirement community. The sickly Martha (diagnosed with terminal cancer) wants to spend her remaining time chilling out at Sun Springs while hanging on to her sense of independence and flexibility. It is safe to say that the obstinate Martha is set in her ways and marches to the beat of her own drum.

Martha meets her match when she ends up butting heads with the retirement village's uptight social director/president Vicki (Weston). When one of the facility's rules requires that one must join a social club this automatically makes the resistant Martha rebel. Furthermore, to get under snooty Vicki's skin Martha hatches a plan to start up a cheerleading squad for the retirees. Among Martha's cohorts trying to create this cheerleading agenda for the retired ladies are noxious neighbor Sheryl (Weaver) and fellow retirees Alice and Olive (Perlman and Grier). Together, the wackiness ensues as the montages of the cheerleader tryouts persist. And yes...mean-hearted Vicki figures into the manic mix by impeding the process of Martha's cheerleading operation within the retirement confines. Hmmm...what are Martha, her recruits, and the hopeful cheerleaders to do in this instance?

No sooner does Martha and her over-the-hill crew decide to hold tryouts elsewhere then something demeaning happens--the viral leak of the cheerleading practices are exposed causing instant, unintentional mockery. The humiliating experience inspires Martha and her oldies-but-goodies galpals to save face and gain respectability again by entering a cheerleading competition to regain some dignity, confidence, and vitality in what these wrinkled wonders set out to do--conquering the cheers and silencing the jeers of the vocal naysayers. Can Martha and her gyrating, gray-haired pom pom performers overcome and achieve their ultimate goal to root away and hold their audience captive?

Poms could have been inspirational, insightful, and pleasantly insane in its piffy premise but the thinly veiled platitudes prevents the high jinks from being viable in frivolity. Hayes struggles to blend the social commentary on aging with the satirical edginess thats feels woefully sketchy. There is nothing endearing or enlightening about the meek material that would make the AARP crowd embrace this dandy dud that awkwardly winks at their banal shortcomings in maturity.

The presented nuttiness feels relentlessly strained and the spotty script mishandles the challenges--both comical and dramatic--that these senior citizens face in health and death. The labored humor turns these cheering older women into convenient prune-proof punchlines. The engine that runs this vacuous vehicle in Keaton's Martha is the familiar ditzy diva schtick that the likeable actress relies on so frequently in past formulaic farces. Although meant as the celebrated resident old broad with the ready-made potty mouth, Weaver's Sheryl--the standby hedonistic hoot--never establishes any off-kilter momentum worth crafty consideration.

Of all the cheerleading routines that Keaton and her calisthenics cougars could have done in Poms is the split...as in splitting from this fruitless, rheumatoid romp.

Do you feel this content is inappropriate or infringes upon your rights? Click here to report it, or see our DMCA policy.
cheerleadingDiane KeatonJacki WeaverPam GrierPomsretirementRhea Perlman