REVIEW: Got some sexual issues to confront? Go ahead and Ask Dr. Ruth in this charming documentary on the cherished sex therapist 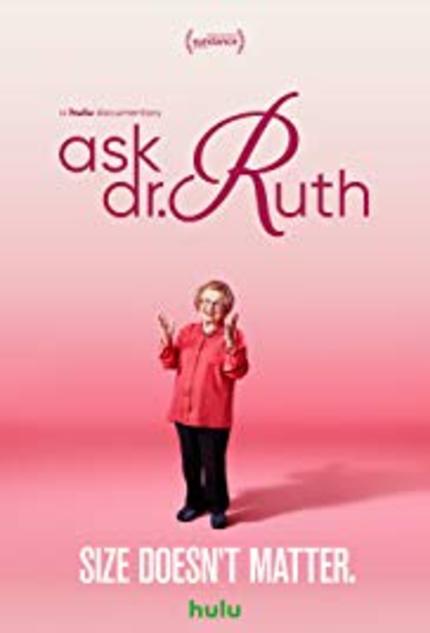 The catchy tagline in the noteworthy documentary Ask Dr. Ruth boasts "size doesn't matter". It really should not matter especially when it comes to considering America's favorite and adored pint-sized sex therapist Dr. Ruth Westheimer whose diminutive presence has had an impactful influence on pop culture not to mention society in general.

Director Ryan White ("Serena", "Good 'Ol Freda") pays homage to the famed soon-to-be nonasegenarian (she turned age 90 in June 2018) as he chronicles a rather interesting and topsy-turvy life of the treasured German-born love doctor on call. Dr. Ruth secured a prominent legacy not only as a heralded sex therapist but also as a ubiquitous media personality, author, and carnal confidante to millions of people during her illustrious career in radio, television, and print.

Ask Dr. Ruth is a revealing bio-doc that teaches, titillates, and triggers the fascination behind the former Holocaust survivor-turned-unlikely sex expert that would generously come to the rescue of one's sexual inadequacies, anxieties, insecurities, and indecisions. Anyone that has seen or heard Dr. Ruth as she instinctively dispenses sexual advice would automatically perceive this well-learned professional woman to be quite engaging, captivating, and involving in the realm of her certain truth and knowledge.  Indeed, Dr. Ruth is revolutionary within the sexual landscape as no bounds are forbidden for her to discuss at random.

There have been many nicknames and/or monikers for the mini-bodied mastermind of sexual proclivities--all respectful and good-natured for the therapeutic icon. Many fans throughout the four-plus decades that have joyfully wined and dined on Dr. Ruth's critical insights about sexual experimentation. Dr. Ruth was about "better sex" for both the adventurous and the dysfunctional. She was the instrumental source to listen to when you could not approach your own parents or sex partner. Sex education through physicality and psychological realization is what armed the tiny celeb doctor to get informative for her inquiring audience.

Primarily, Dr.Ruth's popularity skyrocketed courtesy of her notable come up in the '80s. Her radio talk show Sexually Speaking pretty much made her a household name. Soon, Dr. Ruth would emerge as a sexual superstar as she was welcomed on all sorts of late night shows as well as becoming a handy punchline for comedians. It was common to imitate Dr. Ruth's heavily accented voice and marvel at the little woman whose potty mouth was purposefully beneficial for sexual healing. In her heyday, Dr. Ruth Westheimer was the talk of the town where folks admired her infectious wit, charm, and gentle dizziness. Whatever platform Dr. Ruth graced with her existence was quite suitable for the entertaining lady of lasciviousness.

Fittingly, Ask Dr. Ruth eagerly taps into the triumphs and tragedies of the decorated doctor's prolific livelihood. As spunky and approachable as Dr. Ruth is in spirit and soul she did come from mighty harsh realities in the beginning of her remarkable life. The copious conflicts for the then Karola Siegel was mind-blowing. Orphaned after the Holocaust, the Frankfort, Germany native suffered major setbacks in her lifetime but always kept an eye on the greatness of her potential (her late father was a stickler for Karola/Ruth gaining a solid foundation in learning and evolving). From being sent to a Swiss orphange to researching the horrific details of her parents' senseless eradication in the Shoah from Israel, Dr. Ruth has been well-travelled in more ways than one figuratively and literally. A casualty of multiple marriages and an intriguing figurehead during the heated war years in Haganah, Dr. Ruth saw her share of heartache and adventure.

As with most dutiful documentaries, Ask Dr. Ruth delves into the subject matter by producing several talking heads (Ruth's children, colleagues, admirers, etc.) giving insight and perspective for a cherished woman that would receive her stardom late in the game as a middle-aged, self-help sex guru in her fifties. The various accomplishments she reached in terms of her impeccable credentials before her notoriety is astounding as she was saddled with numerous academic degrees and other revered recognition. No doubt that Dr. Ruth made her belated father proud as punch in the name of advanced learning.  Also, stark reenactments showcasing the saddened duration of the many letters, diaries, and accounts that were devastating to the young Dr. Ruth simply breaks one's heart. Nevertheless, the film never loses its breezy tone when highlighting the kudos and quirks that made Dr. Ruth Westheimer the anoited "sexpert" for a lost generation appreciating her graphic but digestible input.

Although not as in demand in contemporary times as she was at the peak of her influencial career decades ago, the amazing Dr. Ruth will always maintain her staying power nostalgically in the eyes of countless folks that were touched ever so convincingly by her resourceful--and some may say radical--approach to schooling human sexuality from the provocative, intellectualized standpoint. Ask Dr. Ruth is both playful and piercing in its spotlight shining on a strong, achieving giggly feminine force that conquered lingering personalized adversity with sexual advisory potency. Hormones may race but the skillful Dr. Ruth subdued it with grace.

Do you feel this content is inappropriate or infringes upon your rights? Click here to report it, or see our DMCA policy.
Ask Dr. RuthdocumentaryDr. Ruth Westheimersex terapy