Review: DIAMANTINO, The Charming, Surreal, Journey Into the Life of a Man 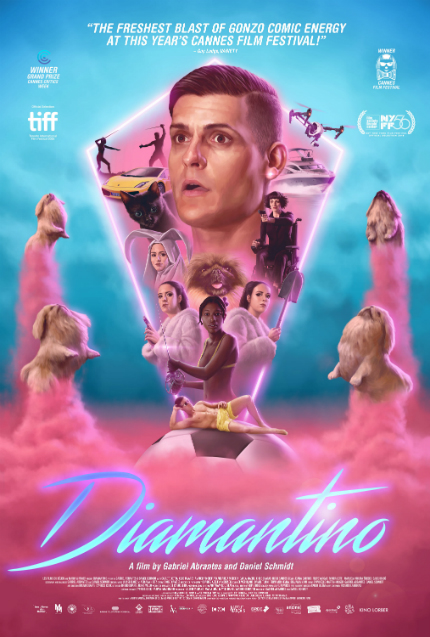 Imagine you are the world's greatest soccer player. You create art with the way you move your feet, the way you touch the ball; it's like a dance that inspires tears of joy in the eyes of anyone who watches you. Now imagine that, at the very precipice of eternal glory for yourself and your country, you stumble. You fail. You lose.

Your nation turns its back on you, your family turns their backs on you, you are no longer an artist, but a commodity who must make amends for the disappointment you've caused. But all you really want to do is make the world a better place, and you aren't even sure what that means anymore, but you know to follow your heart. However, the world, and in particular those who would take advantage of your talent, are against you. They want to use your talent to create a race of super beings with which they can control the hearts and minds of a gullible populace, but you just want to run with the puppies. What do you do?

Co-directors Gabriel Abrantes and Daniel Schmidt's Diamantino is a charming and surreal journey into the life of a man who craves simplicity and happiness for himself and those around him. Unfortunately for him, he trusts everyone, including those who would use and abuse him. The titular soccer star stumbles and misses a shot on goal that would bring the World Cup to Portugal, leaving him in disgrace and in self imposed exile while he tries to figure out what went wrong, but his holiday is fraught with danger as he is taken advantage of by those who should be protecting him, leading to a bizarre odyssey of greed, espionage, and science fiction madness.

It's best to experience the nuttiness of Diamantino with as little foreknowledge as possible, but suffice it to say that the film doesn't skimp on the silly imagery, insane absurdist plot twists, and plenty of abs worth salivating over. As if the quasi-science fiction Forrest Gumpian plot involving a nationalist conspiracy, genetic modification, solving the African refugee crisis, and secretive Sapphic romance weren't enough to keep viewers engaged in this charming exercise in WTF loopy cinema politik, there are the giant puppies bounding through fields of pink sparkles that guide Diamantino to glory. It's nuts in the best possible way.

Diamantino is charmingly portrayed by the impossibly handsome Carloto Cotta as a Zoolander-esque soccer savant, the kind of guy who may not be good at anything else, but he lives and breathes the game. He also loves his family, his cat, Mittens, humanity, and his Lamborghini. He'd never do anything to hurt anyone, Cotta's wide-eyed approach to the role is incredibly convincing. With every passing frame his blank stare conveys not only a vacancy of intellect, but somehow also a deep empathy for those around him. He doesn't know what he's doing, but he wants to make sure that whatever it is, it is good. He is manipulated and actively opposed by members of his family, international conspirators, nationalist wackjobs, and even his own spirit puppies, but somehow we still feel empathy for him.

The film is a bold faced missive against nationalists, anti-EU right wingers, overly ambitious genetic modification, those who would deny refugees a new start in a new homeland, and mean people in general. The fact that Abrantes and Schmidt are able to couch their very obvious political leanings in what seems to be a charming cinematic trifle makes this an particularly fascinating underdog story. It's also unlike anything you'll see this year, definitely worth seeking out and keeping an eye on the filmmakers; if this is what they do with their first feature, I can't wait to see what comes next.

Review originally published during the Toronto International Film Festival in September 2018. The film will open at the Metrograph in New York on Friday, May 24, 2019, and will then roll out to selected other cities in the weeks to follow, all via Kino Lorber. Visit the official site for more information.

Do you feel this content is inappropriate or infringes upon your rights? Click here to report it, or see our DMCA policy.
Anabela MoreiraBrazilCarloto CottaCleo TavaresDaniel SchmidtFranceGabriel AbrantesPortugal