Cannes 2019 Review: A Thief Attempts To Recover His Booty In THE UNKNOWN SAINT 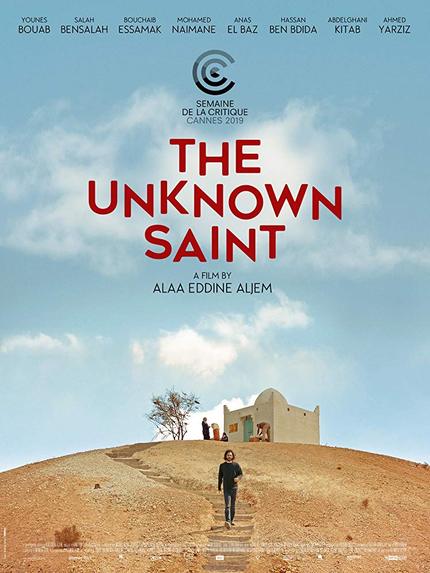 A thief speeds furtively across the Moroccan desert as the police close in on him. Spotting an isolated hill topped by a lonely tree, he stops to bury a bag full of money under its branches. An ideal spot, he thinks, and one that will be easily recognizable once he gets out of jail, which he knows will happen. He finishes the job, steps down off the hill, and, like clockwork, the police arrive and off to jail he goes.

Flash forward a few years and the unnamed thief, played by Younes Bouab, returns to his cleverly selected hiding spot to find the nearby village has discovered this unknown, unmarked burial site and built upon it a shrine to the Unknown Saint. The shrine drives the doings of the town, they've opened a hostel there to house pilgrims traveling to pay tribute, and our poor thief must now find a way to get into - and under - the shrine to get his money back, but it's not going to be easy.

First time feature director, Alaa Eddine Aljem, infuses The Unknown Saint with a Coen-esque sense of humor. While the village is too big to simply smash and grab - the shrine is guarded 24/7 - it's also too small for an outsider staying for any period of time to go unnoticed. The comings and goings of everyone in the village are under a microscope, and like any small town, every little drama is magnified to the point of absurdity, no matter how innocuous.

The thief isn't the only outsider in town, Aljem places a few such people throughout the village, each going through their own odd adjustment periods. The town is a bit on edge at the moment as it is, with a crippling drought making their futures uncertain, but they aren't quite scared enough to leave, after all, the saint shall provide.

Our thief never gets named, but really, very few in this film do. The film isn't so much about the characters as it is concerned with the parts they all play. The addition of fresh blood in the form of The Thief, a comrade called in to assist with the cash recovery, and a new town doctor, are more than enough to set the village's residents buzzing, and little by little, their little idiosyncrasies come to light, turning The Unknown Saint into a series of amusing interconnected vignettes.

When I say the film is Coen-esque, it's in the way these individual stories play themselves out, more along the lines of the subtler comedy of films like A Serious Man than the balls out slapstick of Raising Arizona. Nothing particularly unbelievable happens in The Unknown Saint, but everything that does happen, from the comical failures to recover the money that fail one after the other to the daily routines of the residents, add up to a town where things aren't quite right, but never in such an overt way as to leave the audience behind.

In a film without a ton of expository dialogue, the measured performances of the cast and crew do a lot of the talking. Bouab as The Thief wears a constant sneer of disgust, while the rest of the town speaks only when needed, but their actions speak volumes. In their stead, cinematographer Amine Berrada takes full advantage of the vast and desolate Moroccan vistas, allowing the minute, subtle action to take place over vast barren canvasses.

I wasn't paying too much attention at the beginning, but I'd wager that the film doesn't have a single shot with a moving camera, Aljem preferring to allow the scenes to pay themselves out in their own time within the frame. A dangerous method if the performances aren't quite up to par, but the cast acquits themselves admirably, and we don't really feel a dearth of action.

The Unknown Saint is the kind of understated comedy that is done so well by these African and Middle-Eastern auteurs, which is to say that it's the kind of thing that American filmmakers and filmgoers don't see a lot of. Were this an American film, there would be significantly more in the way of wacky hijinks, but Aljem's approach leaves room for the comedy to be created by the situation, rather than forced into the form of a punch line or a gag. It's a great film, and one that I suspect will find its way to screens via one of the more adventurous distributor before too long.