Cannes 2019 Review: THE DEAD DON'T DIE Is A Nice Place To Live 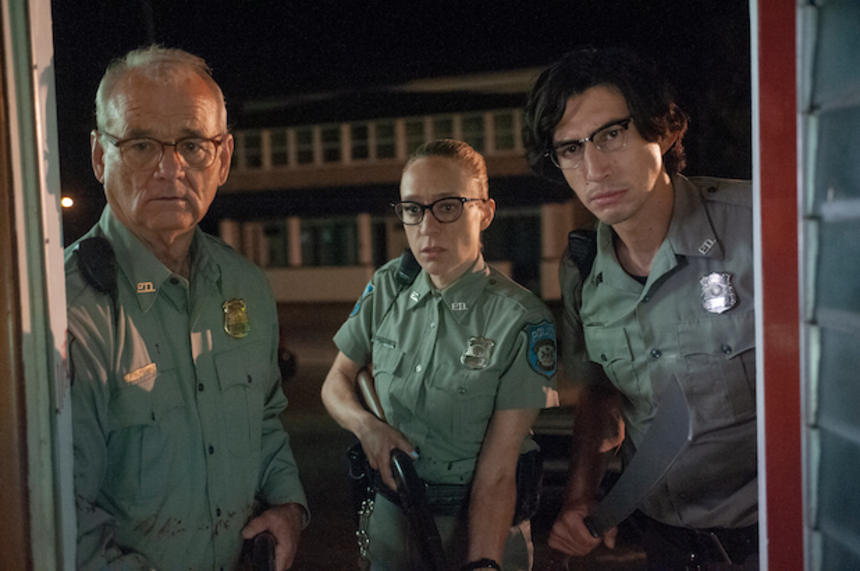 I’m not sure what possessed Jim Jarmusch to make a zombie film, but I, for one, am so damn glad he did! And, to be clear, this is coming from someone who swore off the subgenre eons ago.

Sure, there have been some worthy contributions from folks like Danny Boyle, but I can safely say I haven’t really loved a zombie film since the original Romero trilogy, or its early Italian imitators to a lesser extent. Now to my great delight, in an era where The Walking Dead seemed to assure the irresurectability of the zombie appeal, Jarmusch has somehow restored originality, social satire, and most excitingly, existentialism back into what’s become deeply tired territory. In short, he’s managed to breathe both life and death into the undead.

The Dead Don’t Die finds a wonderful union between Romero appreciation, perhaps particularly where Dawn of the Dead is concerned (though there are references a-plenty to the original Night as well), and Stephen Leacock’s Sunshine Sketches of a Little Town. With an ensemble cast to end all ensembles, Jarmusch populates his small town of Centerville (“a nice place to live”) with the likes of RZA, the WU-PS mailman, Steve Buscemi, the racist farmer, Tom Waits, the nature hermit, Selena Gomez, the irony-loving culturephile hipster, and my favorite, Tilda Swinton, the samurai undertaker from another place (possibly bonny Scotland).

The townsfolk are all tied together by the local law enforcement protagonists; a band of stoic faces care of Bill Murray, Adam Driver, and Chloe Sevigny, to complete the repertory company of Jarmusch alumni. Though it may seem crazy to consider this lark of a genre-bender something of a swan song, in Centreville, the Jarmusch Universe is permitted to delight in its history, with playful nods to past works and influences, all the while offering a slew of new and unassuming personal philosophies that are deadly serious without taking themselves too seriously.

Like the mall-set Dawn of the Dead used the medium as a metaphor for consumerism, Jarmusch takes some hysterical shots at the materialist desires that drive modern society - from Coffee and Cigarette veteran Iggy Pop gravitating toward a pot of good black, to a slew of walking dead in search of WiFi - with a remarkable lack of cynicism. There are more laugh-out-loud moments than I can count, and yet the film is at its best when it cuts the shenanigans in favour of disguised truth, even if that philosophy can perhaps best be boiled down to the phrase “fuck it”.

With the perma-grey-haired smartass savant growing figuratively grayer by the day, I enjoy viewing the film as an unlikely meditation on aging, in keeping with the most profound of the poet’s recent works of existentialism, from Broken Flowers to Paterson. Like Only Lovers Left Alive uses genre as metaphor, in The Dead Don’t Die, Jarmusch is in full playtime mode rejoicing in various walks of B fiction, lending them an air of tongue-in-cheek lucidity to accompany his trademark straight-faced sense of absurdism.

Since I’m far from the first critic to weigh in on this film, it’s becoming glaringly apparent how alone I seem to be in my appreciation. More than once, I’ve heard the work referred to as “minor-Jarmusch”, possibly on account of its pulp-apocalyptic nature, yet to me there is nothing remotely slight about building a personally significant town only to bring an untimely end to his own world and all the dear friends contained within. I’d go as far as to admire the film’s personal take on the No Country For Old Men theme, which greets a scary new world that cyclically wipes away the souls of previous generations with a philosophically bemused shrug.

So, as a retort to those who may feel existentialism is a dish best served cold, to borrow a quote from Stripes: “Lighten up, Francis.” If the end of the world seems like a grim fact, you may as well enjoy the ride.