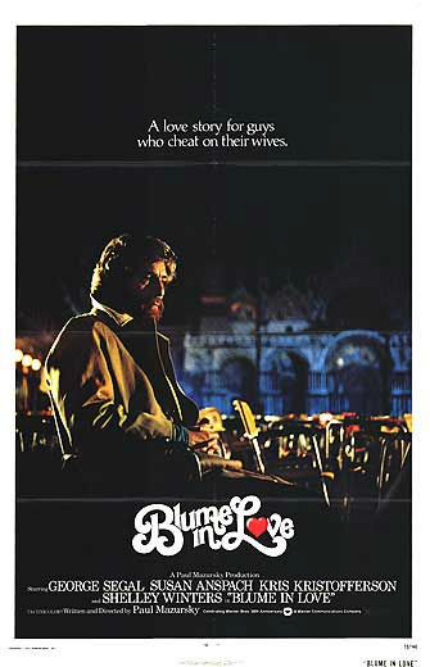 Context plays a big role in my enjoyment and understanding of films from past decades.

For example, reading Shawn Levy's excellent book The Castle on Sunset: Life, Death, Love, Art, and Scandal at Hollywood's Chateau Marmont -- now available from Doubleday and Orion -- drew my attention to films that have been photographed at the famed hotel, including Paul Mazursky's Blume in Love (1973).

In the film, George Segal stars as Stephen Blume, an American attorney who is visiting Europe. Seeking clarity about his marriage to Nina (Susan Anspach), which he fractured by committing adultery with his secretary Gloria (Annazette Chase), he summons memories of their past together as he struggles to figure out what he should do next. Is the relationship worth salvaging, somehow? Or should Blume accept Nina's firm, if abrupt, decision to end the marriage?

Thanks to Bob & Carol & Ted & Alice (1969), which was notorious at the time for the sexual temptations it teased, rather than the social comedy-drama it delivered. Mazursky followed up his directorial debut with the curiously inward-looking Alex in Wonderland (1970) before striking back with his third feature. From a single viewing a few years ago, I thought the sometimes witty, sometime uneven film showed his continued progression as a filmmaker and served as a fine showcase for Segal, an actor whose work I have always enjoyed.

I wasn't particular eager to see Blume in Love again, especially when I realized I'd need to rent it in standard definition (the only option on Amazon) rather than high definition, but Levy's brief description made me want to revisit it:

"Like its cheeky narrative device of balancing scenes in Venice, Italy, with scenes in Venice, California, the film's use of the Chateau itself is a knowing wink by the filmmaker to his Hollywood chums, many of whom had spent time at the hotel under very similar circumstances. " 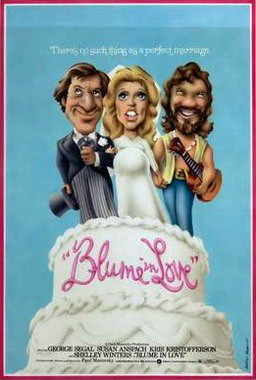 As I watched the film, Segal's charming presence, more than anything else, drew me back into his characterization of a very self-absorbed man. As critic John Simon wrote in his brief comments on the film at hand:

"George Segal is always George Segal, but he is getting to be very good at that. ... What makes the actor so likable despite his lack of versatility ... is that he falls exactly midway between Robert Redford and Woody Allen, between virile handsomeness and amusingly hangdog schnookiness." (From Reverse Angle, published by Clarkson N. Potter, which collects together many of Simon's reviews from that period.)

By the 30-minute mark, Blume is unhappy that Nina has taken up with homeless musician Elmo Cole (Kris Kristofferson). He himself has taken up with Arlene (Marsha Mason), whose character is never much defined, besides her willingness to sleep with Blume on little pretext and without commitment. Blume has moved out of his home and into -- ta da! -- an unidentified hotel, which I learned from Shawn Levy's book was actually the Chateau Marmont, complete with real-life employee Corinne Patten appearing briefly as herself, similarly unidentified.

The narrative is never in a hurry, but is pleasantly diverting until Blume decides that he wants to win Nina back in a bid for his own happiness, even though she appears to be quite happy on her own. Then events turn dispiriting and somewhat disgusting, at least looking back from today's perspective.

Spoiler / warning: The following may spoil the narrative because of its brief description of a scene depicting a forced sexual encounter.

About 90 minutes into Blume in Love, Blume is still doggedly aiming to win back Nina, the love of his life. He visits Nina at home, where they lived together while married. Her companion Elmo has gone to see Gone With the Wind at a repertory theater, and she allows Blume to enter the house. He really loves her, he says, and decided that he wants to have sex with her. She resists, he continues, she screams at him to stop, he continues, he is stronger and taller, he insists, and he rapes her over her protests.

In the moments immediately following the rape, Elmo arrives home, sees them together, hears Nina declare angrily that it was rape, asks Blume if it was rape, he admits it was rape, Elmo punches him, Elmo cries, end scene.

Being the 70s and a Paul Mazursky film, Blume makes a joke about it to Mazursky (who is playing his legal partner) in the succeeding scene and all it's treated ultimately as one more plot development that concludes with Blume and Nina back together again, with a child on the way.

Few newspaper reviews are readily available from that period; Roger Ebert gave it four stars. I wonder if the rape scene, as presented, generated much controversy, if any, in 1973?

As much as I love films from the 70s, maybe more for reasons of personal nostalgia than their individual ambition and daring, it's a sobering thought, especially when I realize that, just a few years ago (when I saw it for the first time), I don't remember reacting to the rape with more than mild disgust.

All these years later, and I still have many issues to resolve and adjust and refine and better understand. And sometimes, movies help me realize how far I still need to go.

Do you feel this content is inappropriate or infringes upon your rights? Click here to report it, or see our DMCA policy.
70s cinema70s RewindGeorge SegalPaul MazurskyThe Castle on Sunset