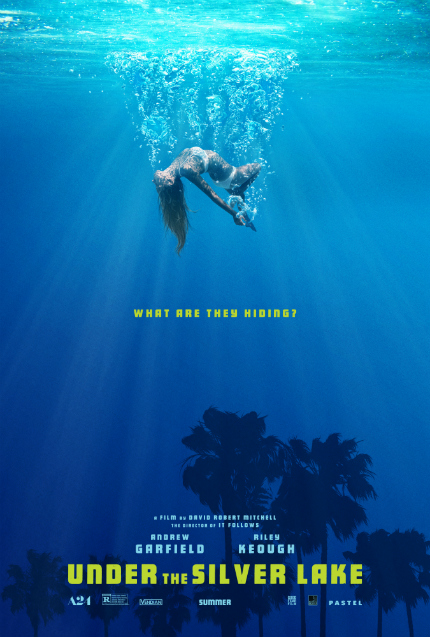 David Robert Mitchell had a critical and audience hit with his second feature film, It Follows, in 2014; so much so that his third feature was readily accepted into the Cannes feature competition in 2018. Obstensibly a neo-noir thriller about a young man searching for woman he had a brief but apparently meaningful flirtation with, it is both an attempt at an homage to films such as Vertigo and Mulholland Drive, and yet seeks to find its own voice for a younger generation who would find themselves reflected in a more contemporary Los Angeles setting.

Alas, Under the Silver Lake does not have the resonance or skill of the previously mentioned films. Instead, it is a half-baked, superficial story, a prime example of straight white male hubris, trying and failing to masquerade as original and interesting, lacking either the necessary substance for it to be taken seriously, and the humour or light-heartenedness that would make it entertaining.

Sam (Andrew Garfield) is an unemployed young man living in the hipster Silverlake neighbourhood of Los Angeles. He doesn't really do much, besides have a booty call now and then, leisurely stare at a neighbour who waters her plants topless, and follow the news of a famous local millionaire gone missing. Then one night he has a brief (chaste) encounter with another neighbour, Sarah. But the next day, Sarah has disappeared without a trace, and Sam makes it his strange mission to discover where she is and why she went away.

The script feels like something written by a much younger man, kept in the back of a drawer, and dusted off without much attempt at revision to make it a little more coherent or the main character more interesting. As Sam is the eyes and ears for the audience, we need to either be invested in him as our cypher, or at least find him interesting enough to enjoy watching his journey.

But despite the presence of Garfield (an actor whose work I enjoy), Sam is one of the least interesting characters I've come across. He has no visible means of income, despite having a nice apartment. But of course, it's decorated with old movie posters so we know that he's hipster-cool (see also his too-cool-to-comb-his-hair, his sloppy attire not matter what place or situation he's in, and his nonchalant manner with everyone he meets); he is devoid of personality, and yet is somehow irresistably attractive to every woman he meets (they metaphorically and literally open doors for him when he has said/done nothing other than greet them); and seems to have no motivation other than his libido, and even then, in his sexual/romantic encounters, his interest seems rather, well, disinterested.

Sam attends various parties (pool and otherwise), meets more women who do anything he asks at the proverbial drop of a hat, learns more about some strange seedy underbelly in Los Angeles (one of the many, presumably), and is occasionally followed through a local park by someone or something. And it's indicated to the audience that Sam is scared, or should be scared, and whatever mystery he is uncovering (surrounding the missing millionaire) will somehow blow the lid off this particualr seedy underbelly, and Sam is/will be some kind of hero.

Sam's party-attending and random-sexual-encounter life is occasionally permeated by his search for Sarah, and these strange stalker moments, onto which is grafted appropriate noir score (by Rich Vreeland, who also composed the excellent score for It Follows) and shot with the light and shadow afforded to colour noir by Mike Gioulakis (again, also from It Follows). As with Mitchell's last film, these elements stand out, and are two of the few things that hold interest.

And certainly, not every film/story has to have world-changing stakes: some of the best films (arguably most) are about the intimate moments of human life, the ways in which we try to find love and meaning to make sense of our existence, or how we cope with grief, or the humourous situations we can find ourselves in with our families or in our jobs. Or in this case, a brief encounter with someone that, for whatever reason, we can't get out of our heads. In the case of this film, we are given a character going on a kind of scavenger hunt, weaving in and out of both the sunny and the dark sides of Los Angeles.

But we still need to see and understand the drive of the protagonist, even if we don't agree with it, to make us want to follow his or her journey, and enjoy the other characters he/she meets along the way. But in this, Under the Silver Lake disappoints again: women characters who merely exist to show off as much bare skin as possible and give Sam necessary information to further the plot; a friend who waxes semi-poetic about the mysteries of the city; a conspiracy theorist who provides a brief moment of comic relief; an an elderly man who apparently is responsible for every hit song of the last several decades and has completely controlled pop culture.

In the end, Under the Silver Lake is the definition of the contemporary white straight male gaze, filtering its perspective and reactions through a character who has little to lose or fear, since, as a white male, he is in no danger. And if there are no stakes, either personal or on some grander scale, then why should the audience care?

Review originally published during Fantasia in July 2018. The film will open in select U.S. theaters on Friday, April 19, 2019, via A24 Films.

Do you feel this content is inappropriate or infringes upon your rights? Click here to report it, or see our DMCA policy.
Andrew GarfieldCallie HernandezDavid Robert MitchellRiki LindhomeRiley Keough

More about Under The Silver Lake