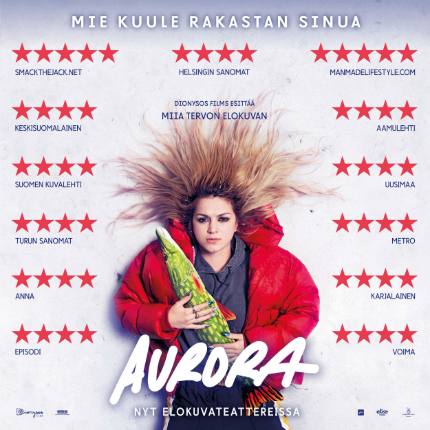 Dueling portraits are drawn with wit and empathy in Aurora, which takes a snapshot of modern-day Finland from a refreshing angle.

The feature debut by writer/director Miia Tervo checks off several tropes in the broadly romantic genre in which it operates. Yet its focus on amiable characters stumbling through life in search of something better builds a gentle, pleasing momentum that is enhanced by increasingly confident visual storytelling.

Twentysomething Aurora, played with an insouciant attitude by Mimosa Willamo (Lake Bodom, Deadwind), finds herself at loose ends. Facing eviction from her family home, along with her alcoholic layabout father, she checks dad into rehab for the umpteenth time and bunks in with her best buddy, Kinky (Oona Airola).

Kinky and Aurora spend their days and nights together, working and playing, but Kinky is getting serious about her boyfriend and wants a change. One drunken night, Aurora makes impromptu plans for them to move from their native Finland to Norway and then must figure out how to pay for the trip.

Enter Darian (Amir Escandari). A single father, he is a refugee in flight from Iran, fueled by a desperate desire to provide for his daughter. He meets the drunken Aurora at a fast-food joint one night, and proposes marriage the next time he sees her so he can secure residency. Instead, Aurora proposes that she find him a more suitable mate, since she is heading to Norway and wants to be paid for her efforts.

What makes the film far more appealing than its general narrative trajectory are the spices that filmmaker Tervo adds. Set during wintertime in the Finnish countryside and shot by cinematographer Arsen Sarkisiants with rough beauty, it's somewhat surprising how warmly the film plays against its chilly landscape.

It's an engaging and funny talkfest initially, as Aurora interacts with the people in her life and interviews for a new temporary job as a care provider for a tart older woman. Aurora is sharply observant to the brink of fatalism about everyone around her as well as her own lot in life, and continually presses forward, somewhat blindly but in a winsome manner.

Meanwhile, Darian and his daughter are introduced as they stay overnight in the home of kind-hearted doctor Tiina (Ria Kataja) and her less-than-welcoming husband Juha (Chike Ohanwe). The opposite of Aurora's careless expressive behavior, Darian is overwhelmed by the weight he carries and consumed by his polite, responsible nature.

The film puts its own distinctive spin on events that unfold, such as how the ice between Juha and Darian begins to thaw after an incident at a sauna. As the film becomes more dramatic than comic, Antti Reikko's editing showcases the images that make the points more eloquently than words alone.

Feeling very much like the work of a first-time filmmaker, Aurora rises above its 'meet awkward and then fall in love' premise to dig into the meaning of love. Do romantic feelings for another person spur you to make real and lasting changes?
How does putting someone else's interests above your own affect your own life?

Ah, these are the mysteries of life, and they are explored very kindly and gently in Aurora. More films from Miia Tervo, please.

The film enjoyed its North American premiere at SXSW last night. It will screen at the festival again on Tuesday, March 12, and Friday, March 15.

Do you feel this content is inappropriate or infringes upon your rights? Click here to report it, or see our DMCA policy.
Amir EscandariFinlandMiia TervoMimosa WillamoSXSW 2019