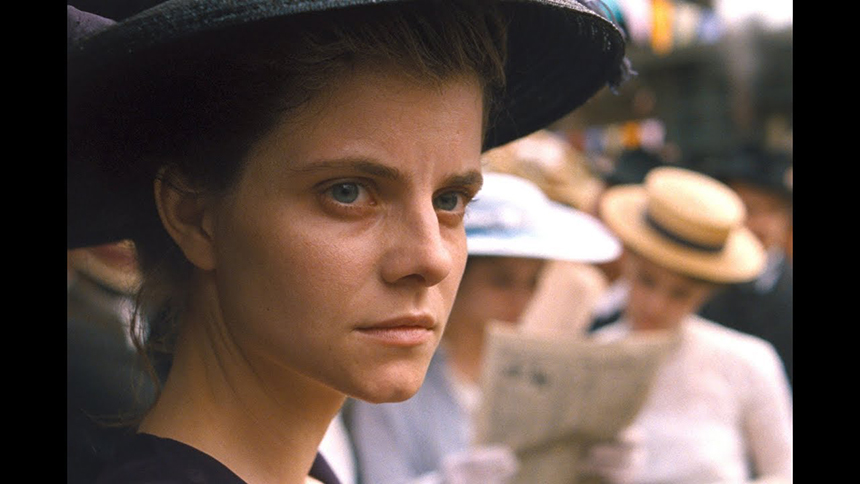 László Nemes' follow up to haunting holocaust drama Son of Saul, Sunset is yet another period film that is an equally challenging, equally powerful, heady masterpiece. And it’s still early in the year, but it’s definitely a film to beat.

It tells a story of Írisz Leiter (Juli Jakab), a young heiress to her famous hat-maker parents who perished in a fire. She came to Budapest, to her parents' hat-making showroom/shop to get a job as a lowly milliner. But the manager of the shop Oszkár (played by great Romanian actor Vlad Ivanov of 4 Months, 3 Weeks and 2 Days, Police Adjective and Snow Piercer) doesn't want her there, saying the city is not for a country girl like her. But Írisz is determined to stay and claim her birthright.

What’s intriguing about Sunset is its setting and specific time period. The year is 1913, not long after the industrial revolution and the Age of Enlightenment, hurtling rapidly toward social and political chaos that caused World War I, the war to end all wars, where 16 million souls perished. It was also the height of the Austro-Hungarian empire.

Soon Írisz finds herself in the chaotic social upheaval where socialists, communists, anarchists, monarchists, ultra-nationalists and cultists all want to get a piece of the action. Violent confrontations spill out on to the streets and dangers and mysteries are around every corner, where nothing is what it seems and everything is deeply layered.

Írisz finds the family secret that her brother she thought she never had is still alive and might be the leader of an underground violent anarchist group eager to eliminate who he deems as members of elite class, including Oszkàr. Does she choose to follow her misplaced allegiance to Oszkàr or her mysterious long lost brother and his murderous plot to topple social order?

Nemes keeps his Son of Saul’s subjective perspective here, focusing closely on Írisz on steadicam, following her exclusively. It makes a startlingly absorbing theater experience. As well as the visuals, Nemes put an emphasis on creating soundscapes that reflects the tumultuous times with disorienting, off the frame whispers, conversations and an altogether ominous soundtrack.

Sunset juxtaposes a society on the brink of self-destruction with something trivial and decadent as a designer hat shop. There is something creepy about all the beautiful, young women hat-makers preparing for the dance ball for the crown prince and princess and be chosen as a personal milliner and move to Vienna. Extremely inquisitive, Írisz tricks everyone into taking the spot of the chosen milliner and witness the rather Eyes Wide Shut-like ritual of the Austrian royals, full of conspirators and cultists.

Clueless about the whirlwind of her surroundings, but ever so curious and strong willed, Írisz is a proto-feminist in the making, bravely throwing herself into the unknown, time and time again, as an unreliable guide for us to make heads and tails out of what we are seeing and hearing and closely experiencing what it’s like to live on the eve of greatest self-destruction us humans ever perpetuated on ourselves (at that time).

Írisz tries to keep up with the rapid flow of this mercilessly changing world in order to not to get swallowed up. There is something defiant about her choices and actions throughout the film. Her endless curiosity and determination to see the world head on are something to be admired.

Nemes doesn't give an easy answer to any of these intrigues. Instead, he makes us work for it. And it’s damn well worth it. As the title indicates, the film tells a lot about human hubris and rightfully reflects on the decadent, chaotic world we lead toward the edge of extinction right now. One can read Sunset as a warning that history repeats itself. But it’s the last segment that also shows the endurance of human spirit. Let’s hope we are strong enough to withstand what’s coming for us.

Do you feel this content is inappropriate or infringes upon your rights? Click here to report it, or see our DMCA policy.
FranceHungaryJuli JakabLászló NemesSusanne WuestVlad Ivanov