Lee Ji-won's beautifully crafted debut feature is tough and uncompromising, but also a vibrant showcase for her impressive filmmaking and the equally impressive performances by main actresses Han Ji-min and Kim Si-ah. 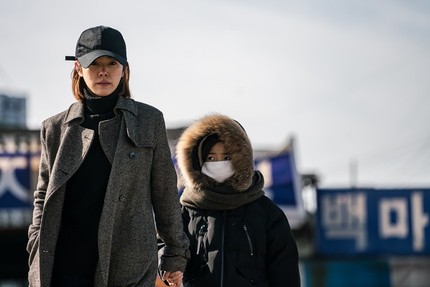 The New York Asian Film Festival, a summer fixture for the past 17 years, has now instituted its first “Winter Showcase,” running February 1-3 and February 8-10, coinciding with the Lunar New Year. For its first winter edition, the festival has taken on as its salient theme “Crazy Broke Asians,” an obvious contrast with the blockbuster Crazy Rich Asians, its core selection of films concerning themselves with the struggles of the 99% who didn’t make it into that hit film.

The NYAFF Winter Showcase’s opening film, Lee Ji-won’s debut feature Miss Baek (receiving its North American premiere), shows that the programmers aren’t kidding around about that theme, despite the latent jokiness of its adopted moniker. Lee’s film is a tough-as-nails, gritty, and unflinching depiction of child abuse, financial struggle, and class constraints that features an equally tough performance by its lead actress Han Ji-min as the titular character.

Despite the intense focus on its emotionally and physically bruised protagonist, Miss Baek begins with a bit of misdirection genre-wise. Its opening scenes feature a different character named Jang-sup (Lee Hee-joon), a detective called to a dilapidated apartment building in Seoul where he finds the decomposed corpse of a solitary inhabitant. This falsely sets us up for some sort of mystery or crime thriller, but that potential is dissipated very quickly when Jang-sup brings his girlfriend Baek Sang-ah – or “Miss Baek” as she prefers to be called – to the apartment, where it turns out that the deceased woman is Miss Baek’s mother.

However, instead of the expressions of grief one would expect, Baek’s reaction is bitter indifference. When Jang-sup asks Baek whether she wants her mother buried or cremated, Baek simply says, “Do as you like.” Later flashbacks reveal the reasons for Baek’s response: her mother was a mentally ill alcoholic who physically abused her and eventually abandoned her when she was very young.

Baek has also served time in prison, for killing a rich businessman’s son in self-defense to ward off an attempted rape, her incarceration a direct result of her lack of resources against a powerful family’s ability to manipulate the legal system in their favor. Since her release, she cobbles together a living with odd jobs such as car washing and working as a masseuse with female clients.

These experiences have made Baek the sort of woman she is at present, with a tough, protective hide shielding her from anyone getting close enough to hurt her. “Miss Baek,” the honorific she adopts, expresses the distance she puts between herself and others, including Jang-sup, as she rebuffs his repeated proposals of marriage.

The carefully constructed emotional chrysalis Baek wraps around herself begins to crumble when she comes across Ji-eun (Kim Si-ah), a little girl she sees wandering around barefoot, dressed in raggedy clothes, and sporting visible bruises on her body. Baek takes Ji-eun to a roadside food stall for a meal, where it’s clear that she’s being starved as well as being beaten. Soon Ji-eun’s stepmother Mi-kyung (Kwon So-hyun) shows up at the stall, smiling and cajoling Baek to let the girl come back home with her.

The film then shifts to Ji-eun’s horrific home life, where she’s relentlessly beaten by Mi-kyung, and kept locked in the bathroom. Mi-kyung screams at Ji-eun about how the girl has kept her from doing what she wants with her life and how she wishes Ji-eun would die. To add to her sadistic cruelty, Mi-kyung also lovingly dotes on her dog, showering it with the affection she denies her stepdaughter. Meanwhile, Ji-eun’s biological father Kim Il-gon (Baek Soo-jang) turns a blind eye, immersing himself in games he plays obsessively on his laptop.

Baek continues to see Ji-eun wandering the streets, during the times her parents shove her out on the streets to fend for herself. Baek, seeing herself in Ji-eun as a fellow abused child, takes her in, washing her in the bathtub and showing the girl her own scars and bruises. Baek also takes her to the amusement park, and being with this girl begins to expose the vulnerability and tender feelings she has for so long shielded from the world.

Baek decides to make it her mission to rescue Ji-eun from her monster parents. However, when Mi-kyung catches wind of Baek’s plans, she does all she can to thwart them, because as much as she hates Ji-eun, Mi-kyung has financial incentive to keep her, since her father gets welfare money to care for the girl. The police get involved at a certain point, but they prove maddeningly ineffectual, as they keep sending Ji-eun back to her parents, regarding what’s happening to Ji-eun as simply overzealous parenting rather than the criminal abuse that it is.

Mi-kyung also uses her societal façade of a church-going woman and Baek’s prison past to counteract Baek’s efforts to save Ji-eun. The battle between the two women for this little girl sets up the stage for a violent showdown.

Writer-director Lee Ji-won takes a scenario that’s somewhat clichéd and contrived, with the older woman rescuing the little girl she sees as a version of herself, and invests it with genuine emotion and intense attention to detail. Miss Baek is an exceedingly tough and grim film, and the many scenes of Ji-eun being beaten and dragged around are sometimes hard to watch, but Lee deftly avoids lurid exploitation by effectively conveying deep empathy and compassion for her characters. She powerfully depicts the tragic cycle of domestic abuse, and society’s failures in stopping or preventing it. (Lee’s inspiration was her own feelings of guilt for failing to help an abused girl who was a neighbor.)

The performances here match the impressiveness of the filmmaking note for note. Han Ji-min, an actress previously known for romantic films and TV dramas as well as period films such as Detective K: Secret of the Virtuous Widow and The Age of Shadows, successfully plays against type, evocatively etching her wounded, hard-living character in every facial expression and gesture. Kim Si-ah, a first time young actress cast from an extensive audition search, is wonderfully natural, her vivid capturing of her character’s fear and helplessness, indeed her very waif-like presence, relentlessly tugging at our heartstrings. Miss Baek is a remarkable debut that bodes well for its director’s future career.

Do you feel this content is inappropriate or infringes upon your rights? Click here to report it, or see our DMCA policy.
Han Ji-minKim Si-ahLee Ji-wonMiss BaekNew York Asian Film FestivalNYAFFNYAFF Winter Showcase