Review: DESTROYER, Trapped on a Conveyor Belt to Hell 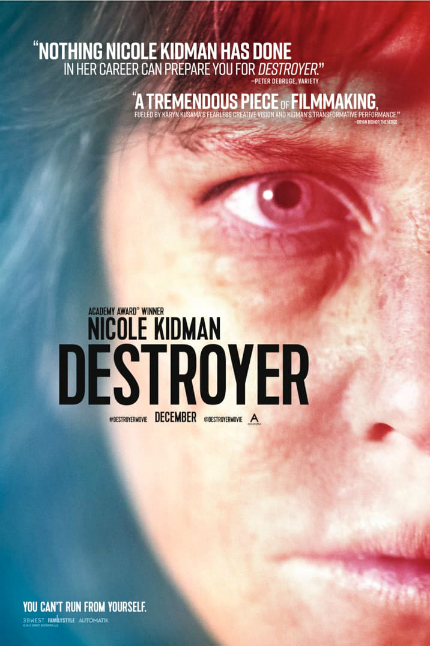 Resolution and redemption would be the most common answers for those whose souls have been tortured over a long period of time, such as Detective Bell, inhabited by Nicole Kidman with weary resignation.

Slumped behind the wheel of her car, Bell looks incredibly haggard, as though even a shallow breath would require more strength than she can muster. A veteran detective in the Los Angeles Police Department, she shuffles warily around objects and people, well aware that no one and no thing can ever be trusted.

Years ago, when she was younger and wider-eyed and her soul had not yet hardened to the density of gravel, she embarked on a case that proved to be ruinous, leaving her in a hollowed-out shell of a body, wracked with guilt and a simmering desire for retribution. What remains of her heart and mind seizes upon a sudden realization that a mysterious man named Silas, gone for years, has returned to life in Los Angeles. Bell becomes instantly obsessed with tracking him down and, in the process, must wrestle with one personal demon after another.

In their original screenplay, writers Phil Hay and Matt Manfredi have woven together an intricate tapestry that has tangled each of the characters permanently, like a spider web. They are all trapped by the past, which is a grotesque animal, to quote Of Montreal.

Destroyer makes the past something even worse, though, a haunting spectre whose hunger for souls is exceeded only by its thirst for blood. Trapped on a conveyor belt to hell, Detective Bell embraces her destiny, no matter the cost to others.

All that might sound like an all-encompassing journey into a bleak wilderness, a trip into the darkest heart of despair. In the hands of director Karyn Kusama, we can always see the sun shining through the smog, her shot selections and framing nudging the viewer through troubled times, guiding a collection of impressive actors to impressive performances, none more so than Nicole Kidman.

Her searing portrait of Detective Erin Bell is never quite inviting -- really, who wants that kind of pain? -- but it always rings true and forlorn and forsaken, driven by the kind of anger that has been buried too long and has long since begun poisoning its surroundings.

Destroyer is the kind of high-quality daytime noir that I'm glad to have seen, even if I am not eager to ever visit again.

Review originally published during Fantastic Fest in September 2018. The film will open in select theaters on December 25, 2018, via Annapurna Pictures.

Do you feel this content is inappropriate or infringes upon your rights? Click here to report it, or see our DMCA policy.
Karyn KusamaNicole KidmanScott McNairySebastian StanTatiana MaslanyToby Kebbell