Review: THE GUILTY, The Longer He Talks, The Higher the Stakes

In this terrific, real-time Danish thriller, an emergency response operator tries to help a desperate woman who's been kidnapped. 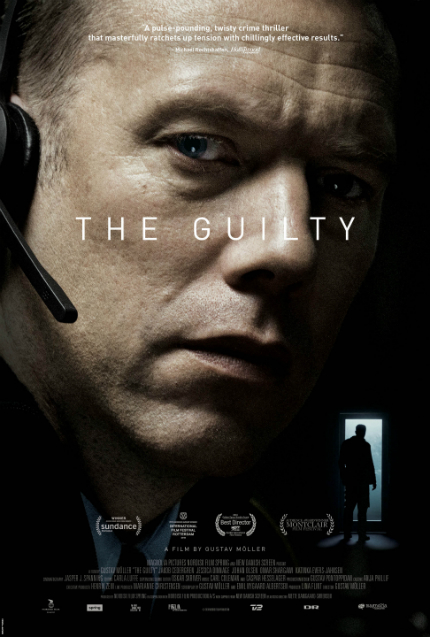 If Larry Cohen lived in Copenhagen, he might have written The Guilty.

Veteran filmmaker Cohen, of course, has written dozens of screenplays that start with a clever idea and then expound on it with a wicked, pulp sense of humor and drama. Two good examples that spring immediately to mind are Phone Booth and Cellular, which both revolve around a phone call forcing the recipient into a suspenseful course of action by the caller.

Putting that aside, however, director Gustav Möller says that a real-life incident inspired him to make The Guilty (original title: Den skyldige), which follows what happens when an emergency response operator receives a call from a woman who's apparently been kidnapped.

Written by Möller and Emil Nygaard Albertsen, the screenplay takes a sober-minded approach to the subject, though a pleasant whiff of a pulp criminal thriller can still be detected in the twists and turns of the plot, as well as the real-time nature and the decision to stick solely with the operator through everything that happens.

The film's limited point of view builds genuine tension very quickly, as does the choice of a lead character. Asger Holm (Jakob Cedergren) is not a typical emergency response operator; he's a veteran police officer in Copenhagen, Denmark, who has temporarily been reassigned to phone duty. Initially, all we know about his particular case is that a journalist is seeking answers to what happened, which makes it easy to surmise that he is under suspicion for misconduct. But Asger's general experience as a police officer, and inexperience as an emergency dispatcher, informs the narrative to an unexpected, even if somewhat predictable, degree.

One evening, the end of Asger's assigned shift is approaching, as is the conclusion of his temporary duty, with some kind of official hearing on his case set for the next day. Asger is, understandably, churning up with anxiety; he is confined to a desk and tied to a phone and dependent upon computer monitors to "read" the phone calls he receives. Naturally, he's also expected to be calm under pressure and as helpful and considerate as possible to anyone who calls the emergency line -- and not every call is a genuine emergency.

So when a call arrives from a woman who sounds like she may be either drunk or impaired, Asger is prepared to deal with it in like manner. Very quickly, however, he discerns that Iben (Jessica Dinnage) is calling from her cell phone while traveling with a man who has kidnapped her. Asger's instincts as a police detective quickly kick in; while he does what an emergency operator is expected and trained to do -- speak calmly and reassuringly, gather information and pass it along to the police -- he cannot help but react as an experienced police officer: do something rather than just sit there.

Making his feature debut, Möller understands the need to make the audience constantly aware that Asger is trapped, without clubbing us over the head with it. He doesn't indulge in camera tricks, instead varying his shot selections to make the visuals serve the story that develops. The final effect is that of a silent bystander as Asger struggles mightily to deal with decisions he makes, without knowing exactly what is happening on the other end of the line.

Möller doesn't pull any punches dramatically, and the consequences of Asger's decisions are felt fully, in part due to the superb, measured, and extremely empathetic performance by Jakob Cedergren. His shifting emotions are manifested in his face and voice, especially, but not in an overtly showy manner.

The premise of The Guilty is easy to describe, but it only begins to hint at the riveting emotional complexity that unfolds during its 90 or so minutes.

Review originally published when the film enjoyed its world premiere at the Sundance Film Festival in January 2018. It will open in select U.S. theaters tomorrow (Friday, October 19) via Magnolia Pictures.