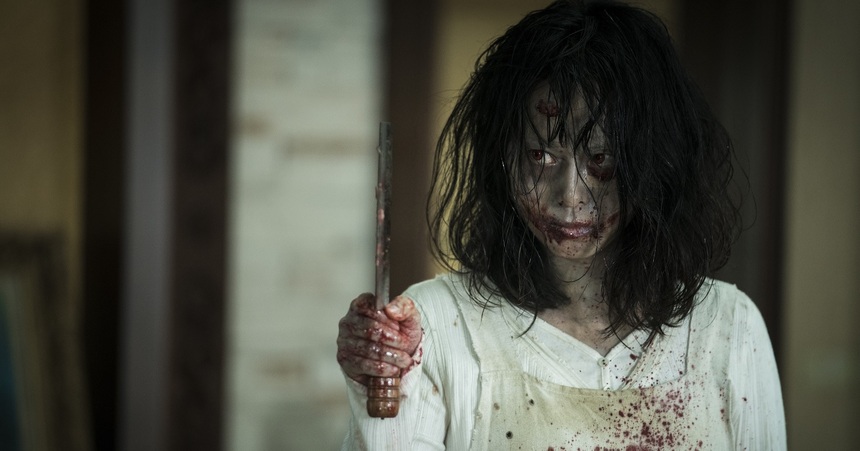 It's that creepy time of year again and while the world of VR narratives are still struggling to gain a foothold outside of the festival world, the horror slice of the VR narrative pie is looking pretty encouraging. Leading the charge for the last few years has been the good folks at Dark Corner. Lead by Guy Shelmerdine and Teal Greyhavens, aside from producing their own awesome VR pieces (Catatonic, Mule, Night Night), Dark Corner has also taken on the duties of currating the best of the VR horror world for their own Dark Corner platform.

Just in time for Halloween, Dark Corner is releasing four new VR narratives from all around the world. These include the Taiwanese Tag Along (pictured), Swedish Oh Deer, the South Korean Horomaru, and The Office from German-based outfit Inside360. All four experiences are available beginning Thursday on the Dark Corner app which you can get on Oculus Rift, Go, Samsung GearVR, and Google Daydream headsets.

More details in the press release below.

Just in time for Halloween, leading genre VR studio Dark Corner will launch four new creepy experiences to its popular platform. These include the exclusive international release of Tag Along, a blood-spattered haunted house story from Taiwan; Oh Deer, an animal POV experience from Swedish filmmaker Peter Pontikis; Horomaru, a terrifying ghost story from South Korea fresh off its film festival run; and The Office, a fun-filled horror short from Inside360. All of these and the rest of the Dark Corner library will be available through the Dark Corner app for Oculus Rift, Go, Samsung GearVR, and Google Daydream headsets starting Thursday, October 25th.

"VR filmmaking is now becoming so popular around the world that we are seeing an awesome surge in innovative and memorable experiences," said Head of Content Teal Greyhavens. "These four films are so different, but each one of them is startling or thrilling in a way that we loved. I'm especially excited about our exclusive release of the Tag Along VR experience, a bloody and beautifully shot haunted house story that will definitely give you goosebumps."

Added CEO Guy Shelmerdine, "October is our favorite time of year for Dark Corner, and we're excited to expand our slate with these thrilling films, as well as continuing to forge new partnerships with other VR outlets and LBE venues all around the world."

After two successful feature films in the Tag Along franchise, director Pu-Yuan Cheng and producer Shin-Chi Chen have created a short horror experience that expands the mythology of this hit Taiwanese franchise - only this time, the terror unfolds in 360º virtual reality. Working with with Funique, the revolutionary technology studio behind acclaimed VR work such as Your Spiritual Temple Sucks, Cheng and Chen deliver a stunningly vivid and spectacularly bloody horror experience that's like nothing you've seen before. Get ready to enter the haunted home of the demon Mosien, if you dare...

Experience what a wilderness hunt is like in Oh Deer -- but from the perspective of the deer. Director Peter Pontikis helms this eerie, unsettling experience, which is the first VR film funded by the Swedish Film Institute. Pontikis graduated from the Royal Collage of arts in Stockholm and is also the director of the cult vampire feature Not Like Others. Oh Deer, his first foray into virtual reality, is a stark, minimalist POV experience. It's an exercise in suspense and divided attention, placing the viewer in the perspective of a wounded animal as hunters close in from all sides. For its initial release it also featured a physical installation, with a life-size deer head; now on Dark Corner, it will be available worldwide for the first time.

Virtual reality gets the found footage treatment in director Jae-gyun Hong's Horomaru, an indie haunted house story from South Korea. Three young ghost hunters with plans to upload their 360 footage for viral internet views go exploring in an abandoned mansion. What they don't realize is that the house used to host grisly sacrificial rites; "Horomaru" refers to "the ritual of sacrificing a living human to a ghost or demon." Director Hong, a graduate of the Korean Academy of Film Arts, masterfully directs our attention in this tense tribute to slow-burn K- and J-horror cinema.

Directed by Miguel Temme, The Office is one of the most popular horror shorts from the prolific European VR studio Inside360. Regarded by many as pioneers and drivers of innovation in VR filmmaking, Inside360 have made some of the world's most-watched 360 video experiences, with over 60 million views online. In this fun, simple thriller, the viewer takes the POV of an office worker about to head home for the day...when suddenly mysterious things start to happen all around you. A truly 360º experience, The Office rewards people who aren't afraid to look over their shoulder, no matter what horrors may be waiting there.

About Dark Corner:
Dark Corner is home to the world's most thrilling and provocative virtual reality genre experiences. Serving as both a curated distribution platform and an original content studio, Dark Corner develops bold, innovative VR storytelling and collaborates with top creative talent around the world to deliver an exclusive lineup of transportive and daring immersive experiences. Dark Corner's award-winning experiences have screened at nearly every major film festival in the world including Venice, SXSW, Tribeca, AFI, New York, Fantastic Fest, Sitges, and many more. The Dark Corner platform has consistently ranked as one of the top downloaded apps in the Oculus Store, and is available for Oculus Go and Rift, Samsung Gear VR, Google Daydream, and iOS and Android mobile.