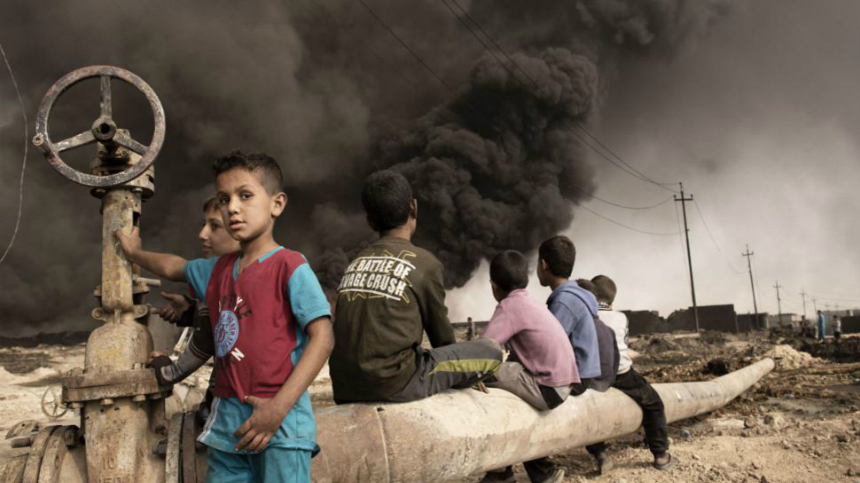 Playing out of competition at the 75th Venice Biennale, Fancesca Mannocchi and Alessio Romenzi's ISIS, Tomorrow: The Lost Souls of Mosul definitely stands out as a documentary that is boldly flying the flag for a major social crisis taking place in Iraq right now. This deeply moving project is easily one of the strongest Italian titles I have seen at the festival this year, and already seems to bare the hallmarks of having been snapped up by RAI Cinema and Arte.

Starting with footage taken six months after the end of the war with Islamic extremists in Mosul, ISIS, Tomorrow definitely earns its place in the festival very quickly. The feature-length documentary has deeply cinematic qualities, and rapidly proves to be fully of very uncanny high-res shots of Iraq's 6th biggest city in total ruins on a big screen.

A soft, pinkish-yellow hue of dawn links many of the film's lingering snapshots, and as far as we can see, we view wirey, twisted messes of metallic debris and cavernous concrete, bombed-out houses. The vast quantities of shattered cement also seems to lend a permanently hazy, dusty ghostliness to ISIS, Tomorrow, and the visual impact of this film alone deserves attention. But Mannocchi and Romenzi's work is far from just artistic, voyeuristic tourism of a war zone.

This doc takes a very deft new angle on the war against Islamic State forces, skilfully refocusing out attentions directly on the children who were affected by the conflict. In particular, the directors do a great job of showing the extent to which minors had been integral pawns in the ISIS war machine. Either because so many IS fighters were themselves child-soldiers under the age of 18, or because they so potently represented a second battlefront for the hearts and minds of tomorrow.

Once promising pupils, many of the kids we see have now been reduced to little more than tragic scrap scavangers. And on the side of families who supported Daesh, things seem even more painful. If anything, we powerlessly observe as history slowly repeats itself, and a new, angry generation of survivors emerges who feels particularly excluded and disenfranchised.

It's a deeply emotive perspective, and it's really remarkable how eloquently and freely these incredibly young children discuss their terrible traumas. Their stances on the horrific extremism that swept Iraq in the last few years also prove a fascinating new angle. To do these young voices justice, ISIS, Tomorrow allows these children absolute air time, meaning that throughout this powerful 80-minute piece, their sadness and anger remains painfully apparent. As does their distance from the help and support they so desperately need.

Subsequently moving between the 2016 offensive to retake Mosul and the offensive's continuing aftermath in January 2018, this documentary's mix of perspectives from both sides goes on to very profoundly show how cycles of conflict are very clearly being created as we speak. It also poignantly illustrates how the recruitment and indoctrination of minors by adults and relatives continues to be a very real problem. In fact,  ISIS, Tomorrow goes as far as demonstrating a deeply hostile new form of aparthied is actually taking root in Iraq.

This doc methodically shows the daily descrimination that families left behind by Islamic State soldiers now face. Indeed, the situation is so bad that even the top-down government authorities are now not allowing these families to possess documents. Immediately, this means they can't even get access to even the most basic of medical care and schooling. And I do think that Mannocchi and Romenzi really succeed in showing how bad things are getting.

But the obvious dedication of that both directors showed to respectfully allowing Iraqis the chance to express themselves in their own words does become ISIS, Tomorrow's own Achilles heel. The editing process simply wasn't taut enough for this doc, and without being able to achieve greater distance from the project, the directors have allowed repetitions to creep in, weaking the overall piece. Plus, this documentary would definitely win a permanent record for the most use of the the word "Daesh."

As such, ISIS, Tomorrow does seem to have become one of a long list of editing casualties at this year's festival. For some reason, it's as if a huge number of titles have simply forgotten how to prioritise quality over quantity. But this flaw definitely does not stop Mannocchi and Romenzi's absolute loyalty to their subjects being a real asset, and this film is a great success. ISIS, Tomorrow does a tremendous job of not only reflecting both sides of the civil war, but also of the various levels of extremity that exist in both camps.

Certainly, ISIS, Tomorrow makes for distressing viewing, too, showing as it does numerous scenes of the dead, incredible live war footage and interspersed exerpts of ISIS propaganda. But as a document of ISIS' declaration of war against society as we know it, this doc is definitely a very important film. All in all, ISIS, Tomorrow is deeply powerful, and drives home its message that you cannot simply defeat ideologies with bullets or wars very effectively. It's a very urgent warning, clearly showing how a lot of the punitive measures currently being used unmistakably resemble the processes which caused many of ISIS' most die-hard fighters to become radicalised. It's a film well worth seeing, especially on a big screen.

Do you feel this content is inappropriate or infringes upon your rights? Click here to report it, or see our DMCA policy.
Alessio RomenziArabicdocumentaryFrancesca MannocchiISIS TomorrowItalyVenice 2018Venice International Film Festival