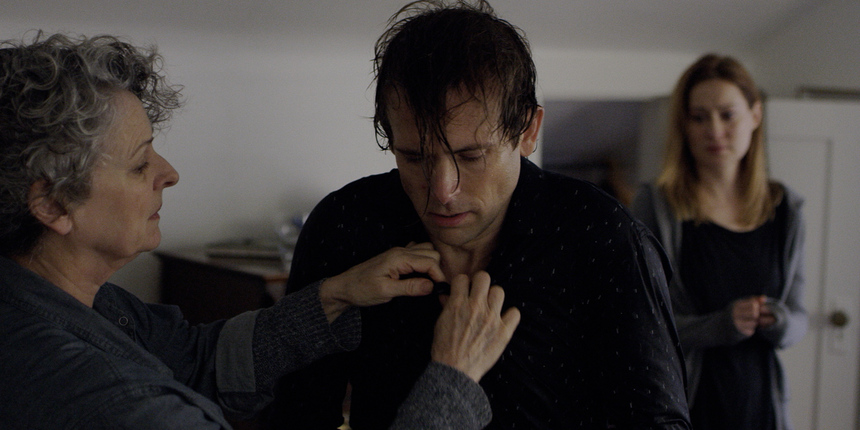 As a Vancouverite, my interest in seeing Bruce Sweeney's Kingsway stemmed almost entirely from the fact that it is shot and set in my city.

Vancouver is, in fact, the third-largest centre for film and television production in North America, after only Los Angeles and New York. The city and its suburbs stand in for countless other locales in productions year-round, and it's still occasionally referred to by the somewhat dated nickname "Hollywood North" -- but, unlike L.A. and New York, it never gets to play itself.

For this reason, Kingsway caught my attention. Named for one of our longer, more confusing streets (it runs at a diagonal, spanning several different neighborhoods), Sweeney's dark comedy revolves around a close-knit family as they weather a series of emotional upsets set off by an extramarital affair.

Alas, none of Vancouver's unique identity really makes it into Kingsway, which is largely shot in nondescript interiors, with a predominantly white cast. The film's plot is put into motion because of an event that takes place on the titular street: Matt (Jeff Gladstone) happens to spot his wife's motorcycle parked outside of a motel, a sight which practically screams 'illicit sex'. He relays this information to his sister Jess (Camille Sullivan) and their mother, Mary (Gabrielle Rose), who both take this development as an excuse to meddle heavily in Matt's marriage.

What follows is a series of spats, break-ups, falling-outs, hook-ups, and surprise revelations involving this mildly quirky middle class family. Throughout these hijinx, Kingsway tries to keep its light tone as it deals with depression, anxiety and attempted suicide. Unfortunately, it's this very balancing act that keeps the movie from being something truly memorable; it's too flippant to address mental health in a meaningful way, but not funny enough to overcome its cliches. It ends up being too serious to be a genuine comedy, without enough depth to be emotionally affecting. The result is inevitably tepid.

This is not to say that Sweeney's film is a total failure--in fact, it is quite a snappy, likeable film with a very game cast. Gladstone and Rose, in particular, give impressive performances as mother and son, which account for much of what works in the movie. They also play the only two characters that are legitimately believable as nuanced, multi-faceted human beings. Sweeney, who also penned the script, seems more taken with the louder, sillier characters. How much you like the film may be determined by whether or not you share his tastes.

Kingsway is, by its nature, a rather low-key, mumblecore-esque comedy of banal errors, and is enjoyable as such. Ultimately, though, it doesn't stand out much more than Vancouver does in a Hollywood blockbuster.

Do you feel this content is inappropriate or infringes upon your rights? Click here to report it, or see our DMCA policy.
2018bruce sweeneycamille sullivancanadianjeff gladstonekingswaytifftorontovancouver