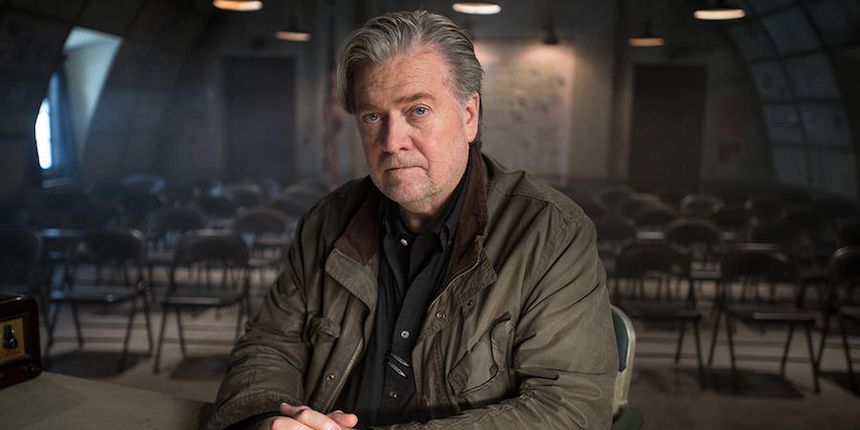 The third chapter in Errol Morris's documentary interview trilogy on significant figures in USA policy creation and thinking is described by the director himself as "his horror movie."

Indeed, the Oscar-winning documentarian showcased a very considerate and quite repentant Secretary of State, Robert McNamara, examining his mid-20th century legacy with a candour and generosity directed towards the filmmaker. Another U.S. Secretary of State, in the latter part of the 20th century, Donald Rumsfeld was more adversarial and his interview plays out like a chess match. That interview that resulted in a stalemate, and some frustration towards the audience, but fully captures the paradoxes of the man, in spite of no satisfying answers.

With American Dharma, Steve Bannon and Morris engage in conversation that is somewhere between a Wild-West showdown and a slow-motion wrestling match. Any additional apocalyptic tones throughout are symptomatic of the current Trump administration's all out war on democratic institutions.

It is worth noting the visuals that Morris uses to stitch interview sessions into feature films.  The Fog of War has McNamara surrounded by data, figures and rules and listening. The Unknown Known uses roiling open water, on-screen text, and drifting snowflakes as a metaphor for Rumsfeld's endless, often semantic, memos. And American Dharma is filled with abandoned air-strips with cracked pavement, a Quonset hut turned hangar which is consumed in fire, and twitter chimes slowed down to sound like banshee wails. Morris wants to shine a light on one of his personal Lucifers, whereas Bannon seems to want to buddy up to, and even at times implicate, Morris via collaboration as fellow filmmakers. Bannon at one point cites Morris' Oscar-winning The Fog of War as his inspiration to make propaganda documentaries for Breitbart.

Some have already questioned the notion of giving Bannon yet another platform, and one as glossy and thoughtful as an Errol Morris documentary.  Earlier this month, a New York Literary symposium was a firestorm on Twitter and media circles for offering Bannon the keynote. It was quickly scrapped. My personal belief is that sunlight is the best disinfectant here. Morris gets in some terrific blows early on that confound Bannon, particularly in regards to burning down so many American establishments, while falsely equating populist rage with an impractical (and frankly, racist) immigration ban and environmental decay. Bannon pauses and evades before changing the subject. Morris continues to chip away by the way he uses his own medium, the feature-length-interview along with the filmmaking nuts and bolts - camera angles, editing, image association, to expose, distort and shade Bannon's icky world-view.

The two men seem more at home discussing some of the minutiae of cinema, including the Gregory Peck war film, 12 O'Clock High, as well as The Bridge on The River Kwai. Interpretations of the final scene of Orson Welles' The Chimes of Midnight seems like 'neutral ground' to grapple with political events: Was Falstaff being exiled by the King he made, a tragedy, or a success in purpose? It is loaded, and compelling, particularly for cinephiles and Shakespeare lovers.

It is also no coincidence that The Searchers also makes an appearance. The classic Western is a often a case of reducing indigenous characters to simply, 'the Other.' Both men, of course, place different emphasis and interpretation on different elements of the John Wayne starring John Ford film.

It is telling that Morris chooses to not use the 'look into the camera' technique, the so-called Interrotron to frame Bannon. Rather, he chooses a series of escalating cuts in angles, some of them quite Dutch (again, this is his horror film). He sometimes gives Bannon enough rope to hang himself, but often he lets Bannon prop himself up as an agent of change, someone who will clear out the globalist bramble with a Nationalist fire.

It is plain that Bannon sees the world in terms of all-out war, with the only way to truly win being to burn the whole thing down. Morris indulges him in some of his more egregiously apocalyptic rationales, often with an epic, even bombastic, soundtrack. This is unsettling, but oddly entertaining at the same time. Bannon is painted as both an false Robin Hood character as well as an everyman (Bannon himself is shot in these scenes) striding trough an abandoned, empty wasteland to what, purposelessness?

Errol Morris is, of course, keen on evaluating photography and procedure. Standard Operating Procedure and The B-Side, along with his wonderfully obsessive essay on the order of which two photos of Crimean War cannonballs were taken on a lonely road, delve into the complex power of photographs. Tabloid and his cold-case novel, A Wilderness of Error, examine how third-party agents can radically control and change the narrative of a crime or, for that matter, how a documentary film can change the result in The Thin Blue Line.

American Dharma eschews the old media of newspapers and television, and dives down the rabbit-hole of our digital selves, from World of Warcraft economies to the Twitterverse of idea dissemination, and the alternative facts of new-media institutions. Pixelated video screens, open windows, and pop-up tweets form a large part of American Dharma's aesthetic, at times, like we are watching a computer desktop.

No longer is the 'Medium the message,' we are in a dangerous reduction to simply 'the Media is the message.' You can see Morris attempt to rally against this, while Bannon doubles and triples down on it. There is a barely restrained 'Fuck You' from both parties, but Morris might win the day with an honest confession: he voted for Hillary Clinton, to the chagrin of his millennial son, out of fear, not hope.

And that Morris admits completely missed reading the winds of Bernie Sanders' progressive populism, while Bannon was busy both puffing up the Trumpian hot air and surfing it to victory. President Trump may be a blunt instrument, but Bannon was successful at using him to pulverize many of the load-bearing pillars that made America (occasionally) great, and airing the current horror-show episode the country and world are grappling with.

Do you feel this content is inappropriate or infringes upon your rights? Click here to report it, or see our DMCA policy.
AltRightBreitbartDocumentaryErrol MorrisMediaMoviesPoliticsSteve BannonToronto 2018TrumpStephen K. Bannon