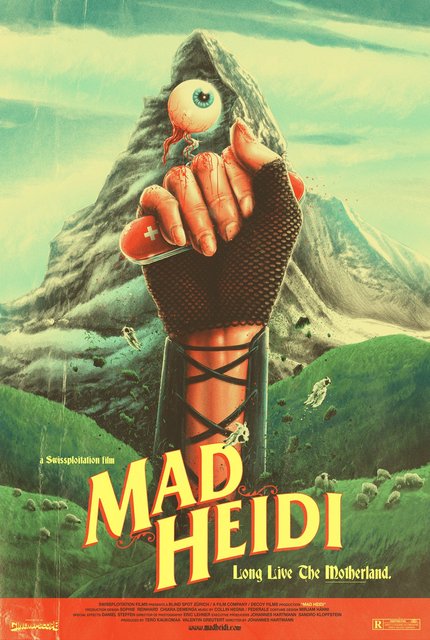 Things are getting weird in the Alps. All that pure mountain air is apparently turning the creators of the upcoming Mad Heidi a little bit odd as they spin the wholesome image of their homeland on its head for what they term the nation's first 'Swissploitation' film. I know one thing for certain, you'll never look at fondue the same way again.

The Heidi story moved the hearts of whole generations around the world. But meanwhile Heidi has grown up, just like us. She ain’t no sweet little kid anymore.

In the near future the world is sinking into war and chaos, but Switzerland has sealed itself off as an island of the rich. An egocentric heir of a multi-billionaire cheese empire is ruling the country with an iron fist to maintain an artificial postcard-image of Switzerland. When Heidi is abducted by the brutal government troops, she must fight back against the cheese-fueled machinery of hate. They will soon realize they just fucked with the wrong Heidi!

Director Johannes Hartmann is joined here by producers Valentin Greutert and Tero Kaukomaa - the latter best known as the producer of Iron Sky, who knows his way around a cult movie or two. And as was the case with Iron Sky the team behind the film is looking to tap directly in to their audience to fund this with a crowd funding effort fueled by the sale of 'Heidi Bonds' and advance merchandise. That lovely artwork with the eyeball pinned to a Swiss Army Knife? Yep, owning that will directly support production of the film. You can find all the details on the crowd fund here!

Check out the first trailer for the film below!

Do you feel this content is inappropriate or infringes upon your rights? Click here to report it, or see our DMCA policy.
cult filmiron skymad heidiswissploitationtrailer