Review: THE NUN; It's Helpful When The Title Describes How Much I Enjoy The Film 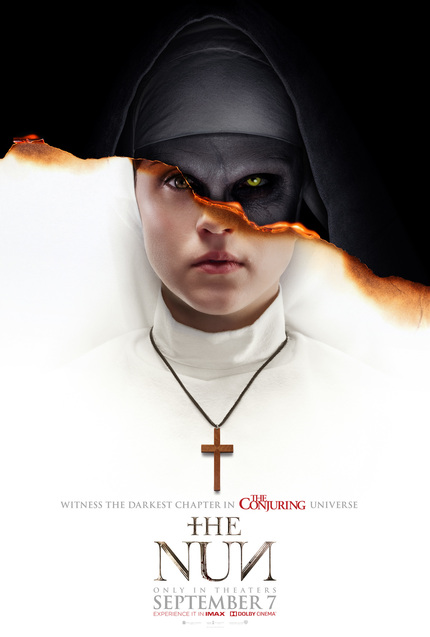 The Nun is a bad movie.

Born from a particularly successful jump scare in The Conjuring 2 - a film I quite enjoyed - Corin Hardy's The Nun struggles to conjure even a fraction of the dread presented by its antecedent. Unfortunately, this attempt to expand the Conjuring universe falls flat, with poor pacing, unearned jump scares, and a general sense of laziness that reeks of cash-in.

When the Vatican informs "miracle hunter" Father Burke (Demián Bichir) of a mysterious and gruesome suicide at a remote convent in Romania, he is sent on a hunt to determine the nature of this affront to God. By his side is novitiate nun, Sister Irene (Taissa Farmiga), a young nun in training with a history of religious weirdness. Together they trek into the Romanian heartland, aided by a French-Canadian delivery boy, Frenchie (Jonas Bloquet), who was among the last to see the suicided nun alive. When the trio reaches the convent, all hell breaks loose when they attempt to make things right with God, only to find themselves in the middle of a fight for the salvation of the world.

Before I move any further, I want to apologize if I made the film sound in any way interesting. It is not.

Conjuring creator James Wan is very likely the most influential and successful character in the story of 21st century horror. With the Saw, Insidious, and Conjuring franchises to his credit, Wan is responsible for billions of dollars of box office success in less that twenty years. Bully for him, and a boon for we horror fans who are largely appreciative for his making franchise horror a thing to look forward to these days, but it may finally be the case that the Wan-inverse has begun to spread itself too thin.

With The Nun, director Hardy attempts to capitalize on what was one of the Conjuring 2's most successful scare gags, an abstract portrait of a nun come to life, however, that tiny bit of backstory isn't enough to support an entire feature, and without Wan at the helm as either writer or director, the entire idea falls horribly flat.

Leading lady Taissa Farmiga, possibly best known for her recurring appearances in American Horror Story, does a fine job with her largely thankless role as the heroine of this terribly bland story. It doesn't hurt that she's a dead ringer for her elder sister Vera, who ably leads the Conjuring films. Demián Bichir, on the other hand, is about as engrossing as a wet blanket in a role that doesn't ask much, and gives even less to the audience in return. The most endearing character in the film is Bloquet's Frenchie, who plays his role of simpleton in the woods like a kind of backwoods Shaggy, constantly surprised by the incredible nonsense going on around him.

The Nun works neither as a stand alone horror film, nor as an extension of the Conjuring universe (such a weird thought). It's a boring, uneventful, downright ludicrous attempt to capitalize on less than four minutes of screen time in an infinitely better film. It isn't the first time a film attempting to capitalize on success will have failed, I guess I just expected better. Serves me right.