Review: FOUR HANDS, Two Sisters Reckon with the Murderous Spectre of the Past 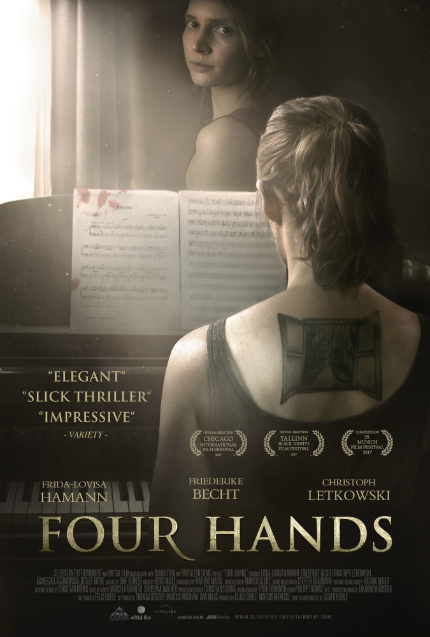 Psychological thrillers don't get much trickier than Four Hands (original title: Die Vierhändige), which plunges two young sisters into a world of despair in its opening minutes.

They survive a night in which their parents are murdered, but the mental scars are deep and lasting. Twenty years later, uber-protective older sister Jessy (Friederike Becht) hears that the killers have been released from prison. She immediately races to the side of her younger sister Sophia, as aspiring professional musician who brushes her off as she attempts to focus on an important audition. But Jessy is not to be denied; she is frantic, insistent and, frankly, dangerous as she insists that Sophia (Frida-Lovisa Hamann) follow her into a perilous life that entirely revolves around vengeance against the killers.

I'm not familiar with writer/director Oliver Kienle's previous feature (Stronger Than Blood)) nor Bad Banks, the television series he shared in creating and writing (it's heading to the Hulu streaming service in the U.S.). Solely on the basis of Four Heads, however, he has a sure sense of how to establish an atmosphere filled with tension that grows steadily more unnerving as it goes.

His key collaborators include director of photography Yoshi Heimrath, film editor Phillip Thomas and musical composer Heiko Maile. The jagged yet propulsive narrative can be maddening and misleading at times, which is likely intentional.

Four Hands is all about deception. After all, can anyone truly heal from a traumatic event in childhood? Are survivors only fooling themselves into thinking that they have overcome horrors that may have permanently shifted them onto different paths than they would have taken otherwise? And, the classic conundrum: if you are losing your mind, how would you know?

These questions keep resurfacing throughout life, whether someone has suffered from childhood trauma or not. It's easier, and surely less emotionally painful, if one could pave over such agonies, and perhaps that might have been possible if the convicted murderers in Four Hands had not decided to return to the town where the atrocities were committed.

Such an unquestioned decision -- is it intentional? -- is the lifeblood of nearly all psychological thrillers. Filmmaker Kienle is not quite able to overcome it and a few other, similar, eyebrow-raising twists, which serve as reminders that this film is a fictional endeavor.

Still, the snappy pace and overwhelming, noir-ish inevitability finally pushed those reminders out of the way for my personal enjoyment and I easily found myself caught up in the swirling currents of the film. Frida-Lovisa Hamann and Friederike Becht are entirely convincing as they grapple with the acute, devastating reality of their desperate lives. Christoph Letkowski contributes a good turn as a doctor who becomes reluctantly involved.

Four Hands is easy to recommend and difficult to dismiss from memory. Believe me, I've been trying.

The film opens on Friday, September 14 at the Laemmle Music Hall in Beverly Hills, California. It will be available on various Video On Demand platforms on September 25 and on DVD on November 13.

Do you feel this content is inappropriate or infringes upon your rights? Click here to report it, or see our DMCA policy.
Christoph LetkowskiFrida-Lovisa HamannFriederike BechtGermanyOliver Kienle