Review: FINAL SCORE, When the Clock Runs Out, Everyone Dies 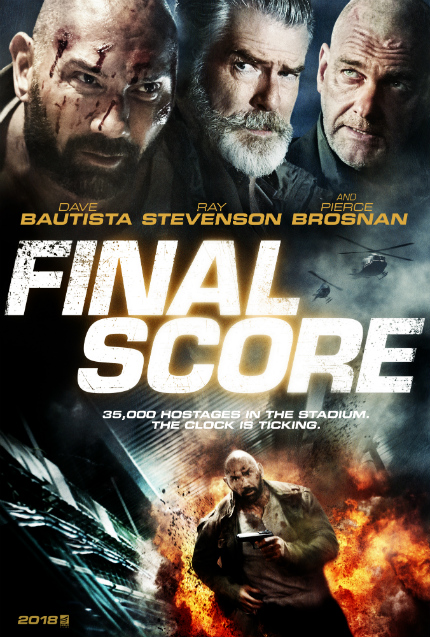 It's all fun and games until innocent civilians are murdered.

Final Score reminds me of Peter Hyams' Sudden Death, starring Jean-Claude Van Damme, which is remarkable, because I haven't thought about Sudden Death since I saw it on cable more than 20 years ago.

The earlier film follows intrepid security guard Van Damme, haunted by a past mistake that cost a little girl her life, as he treats his two young children to an ice hockey game in Pittsburgh, where terrorists proceed to take the U.S. Vice President hostage and threaten to blow up the arena if their demands are not met by the end of the match. Of course, they didn't count on Van Damme! He battles the villains all over the arena, including an extended sequence in the kitchen.

The new film follows intrepid military veteran Dave Bautista, haunted by a past mistake that cost his best friend his life, as he treats his best friend's teenage daughter to a soccer game in England, where terrorists take the control room captive and threaten to blow up the stadium if their demands are not met by the end of the match. Of course, they didn't count on Bautista! He battles the villains all over the stadium, including an extended sequence in the kitchen.

Released in December 1995, Sudden Death was an obvious clone of Die Hard (1988), part of a long, ever-diminishing wave of derivative action films that continues to crash upon cinema shores. To its credit, it was enlivened considerably by Peter Hyams' snappy direction and Powers Boothe's acting prowess as a nasty villain. Van Damme, age 35 at the time of release, had recently worked with John Woo on Hard Target and Hyams on Timecop, so he was at the height of his powers.

Former professional wrestler Dave Bautista is now a touch older than Van Damme was, but he's already formed a friendly, tough-guy image, thanks especially to his role in Guardians of the Galaxy and its sequel. Ray Stevenson, who I have happily followed since the days of HBO's Rome, can easily veer from heroic bloodshed to far more unpleasant carnage, which he does effectively here, even with an Eastern European accent.

Early on, Uncle Mike (Bautista) tells his 15-year-old niece Danni (Lara Peake): "I literally didn't even understand one word you said," which helps to explain Mike, who is not really Danni's "uncle," just the rootless, restless, yet trustworthy family friend who gave an order that got Danni's father killed. U.S. Army veteran Mike is now a mercenary with a good heart, and visits England regularly to look in on the only 'family' that he's ever known.

On such a trip, the stranger in a strange land takes Danni to a football match -- even though he hates the sport -- and becomes caught up in a terrorist plot led by Arkady (Stevenson), who is searching for someone important, reportedly in attendance. His gang locks down the stadium, where the crowd inside doesn't notice anything amiss, leaving Mike on his own to foil their plan until the local authorities are finally made aware of what's happening.

Mike gains occasional help from Faisal, a young stadium usher / comic relief, but otherwise he must grunt and groan and take bullets and more physical punishment that any normal man could take and still come out swinging. He is our hero, after all.

Directed by Scott Mann, who also worked with Bautista on Heist (2015), Final Score is filled with wall-to-wall action, which is efficiently staged and filmed, though the seams sometimes become apparent. This is rough-and tumble action, featuring an abundance of bloody violence and excessive profanity throughout.

Really, if this was the 90s, I would probably not even mention the senseless murders of bystanders, police, and terrorists. Nowadays, though, such acts require an even greater suspension of belief, which I suppose is no longer within my grasp, and so I could not "buy into" any of the reasons cited by Stevenson or others in defense of their motivations. This surprised me, to be frank; I was expecting to enjoy a rousing action flick that was, at worst, a politically incorrect piece of competent filmmaking.

Instead, it's just murder and bloodshed and wanton violence without any redeeming factors, in my view. But don't let me stop you from indulging, if that's still your thing.

The film will be released in select theaters and on VOD and Digital HD on Friday, September 14.

Do you feel this content is inappropriate or infringes upon your rights? Click here to report it, or see our DMCA policy.
Dave BautistaPierce BrosnanRay StevensonScott MannUK