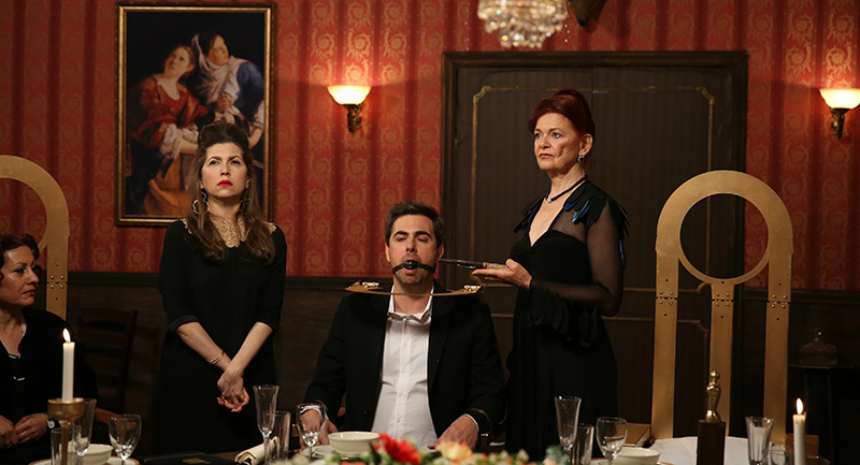 The air of a fairy tale blows throughout, swirling hither and thither, as Sophie and Hannah search for a suitable man. It is not just any man they seek, however.

He must be good-looking, someone their peers will look upon favorably. He must be unattached. And they are looking for a man of a certain size; the bigger his ... head, the better.

The opening moments of Madam Yankelova's Fine Literature Club (original title: HaMoadon LeSafrut Yaffa Shel Hagveret Yanlekova) suggest a Tim Burton-style dark comedy. Reserved Sophie and her outgoing friend Hannah stand on a road in an isolated area at night, pretending to be hitchhikers so they can get a man to stop.

The intent of their actions is diabolical rather than romantic or sexual, motivated by Sophie's desperate attempt to lure one more hapless man so she can quality for membership in a secret club. Sophie is a lovely-looking lady, but she is growing older and you know how men are: they go for the young chicks! And so Sophie is forced into a life of deception in order to achieve her aims.

The thing is ... that's not quite accurate. The entire movie is filled with deception; none of the primary characters are exactly who they appear to be, so by the time the handsome, even strapping Yosef appears at a library where Sophie works, he is immediately suspect.

In his feature debut, Guilhad Emilio Schenker directed from an original screenplay credited to himself and Yossi Meiri. The Israeli film has an attractive gothic vibe, which is supported first of all by the undefined setting; it appears to be taking place in the modern day, but the lack of specifics is somewhat unsettling.

Cowriter Meir also provides properly shadowy photography and sharp editing. The vibe is also due to the striking production design, which is marked by handsome, very specific details and an abundance of empty, foreboding spaces.

The tone gradually morphs from delicious dark comedy to something a bit more alarming, which comes about naturally as the characters become more defined and empathetic. This is a very strange film in many ways; I'm not even sure how to describe it to sum up, beyond what I've written here.

The film made its international premiere at Fantastic Fest today; it will screen again on Monday, September 24. More information here.

Do you feel this content is inappropriate or infringes upon your rights? Click here to report it, or see our DMCA policy.
Guilhad Emilio SchenkerIsraelYossi Meiri