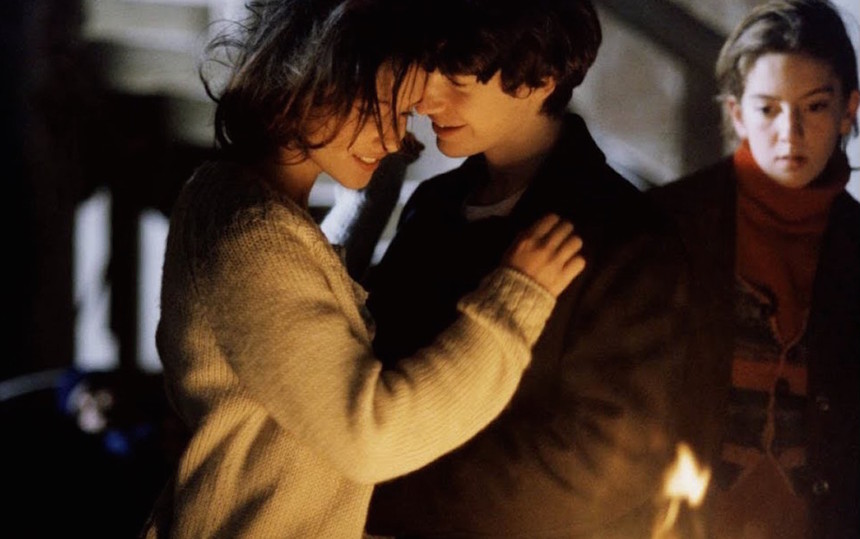 Music rights took Olivier Assayas' 1994 film, Cold Water, out of circulation for decades. This is ironic, given the film's music was the principal element of its creation; Cold Water was conceived as part of an anthology of television works by French directors that had to feature a kickass soundtrack and at least one party scene. When the rights lapsed, Assayas had to shelve his film (which he had expanded from the TV-episode mandate to feature length).

Personal Shopper and The Clouds of Sils Maria behind him, Assayas solved the rights issues a couple of years ago. I caught the newly-restored re-release of Cold Water during TIFF Bell Lightbox's Assayas retrospective in the fall of 2017. Remastered in 4K from the original Super-16mm negative, the same transfer now used on Criterion's new Blu-ray, Cold Water is a grainy, gorgeous piece of pop art (first) and angsty teen melodrama (second).

Gilles and Christine (Cyprien Fouquet and Virginie Ledoyen, carrying the picture with charisma to spare) are a young couple in love in France in the 1970s. When Christine's father has her committed to a mental institution after she is caught committing a petty crime, she escapes, and Gilles and Christine attempt to go on the run together.

The plot isn't much and neither are the characterizations, and it's not until the second act that the film really kicks into gear, by abandoning plot and characterization altogether and jacking straight into adolescent phantasmagoria.

The teens hunker down at an abandoned house in the country, filled with other young people, who are perhaps transients like themselves. A bonfire and all-nighter party ensues, during which Assayas fills the soundtrack with track after track of broad American rock.

Leonard Cohen gets some better atmosphere here than he does in McCabe and Mrs. Miller, and Janis Joplin's "Me and Bobby McGee" -- played as Christine wanders through the house party, cutting her own hair off -- will have your heart rising in your throat. Assayas' handheld camera jinks and weaves with the characters as they make their way through the night, and the result is mesmerizing, roughly twenty minutes of a pure cinema essay on youth, love, sex, communication, and imagination.

Initially framed against a raging oil can fire, heavily sedated, Christine's discomfort and alienation meld with the party to become a potent visual metaphor -- watch for further echoing moments as flames frame or envelop the characters. Brimming with adolescent brio, Gilles pursues the girl through the party trying to make some kind of plan to move forward, but isn't mature enough yet to meet the timbre of her determination.

The youngsters kiss, dance, cling to each other, but as the film's climax draws closer, the connection can't be enough.

The Blu-ray transfer shows off the film's source material beautifully. The more that digital capture takes over filmmaking, the more I enjoy these infrequent trips back to the "limitations" of film and the precise visual worlds they conjure, where nights are ink-black and nothing intrudes into the director's frame by chance.

There are some stunning hues and textures in Cold Water, which seems to have been photographed in a world of perpetual November. Grain is present in the transfer without being overwhelming, and the desaturated colours conjure the mood nicely.

Supplements on the Blu-ray are scant. There are new interviews with Assayas and his cinematographer, Denis Lenoir, and some archival footage from the '90s featuring the director and his stars. Assayas details his use of music in the film and the inspirations that drew him into the production, especially a desire to return to something small and nimble after having worked on a much more complex production. Lenoir, too, seems to have enjoyed the skin-of-their-teeth filmmaking approach, saying that what's fun about making movies is not knowing whether or not you're in control of the problems facing the crew.

The included essay by critic Girish Shambu is a highlight, as Shambu connects his own youth listening to records to the spirit of rebellion and revolution that Assayas returns to in the film. More importantly, by describing Assayas' self-professed interest in Situationism, Shambu poses a mighty brain-tickler: was the filming of the party sequence in Cold Water, itself, a greater work of art than the finished product?

Opinions will vary. But few such scenes better capture the ephemeral joys and pains of youth.