Director Nimród Antal returns to Hungary to pull off an Eastern European thriller. 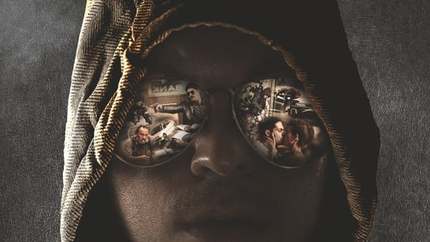 Los Angeles-born filmmaker of Hungarian ancestry Nimród Antal made a name for himself on the international circuit with a debut that turned into a minor cult film, Kontroll.

He then returned back over the pond to work on horror Vacancy, sci-fi thriller Predators, music movie Metallica Through the Never and managed to direct an episode of M. Night Shyamalan´s TV adaptation of the mystery trilogy Wayward Pines.

On his recent visit to Hungary, he finished his latest feature, The Whiskey Bandit, combining the allure of Eastern European social drama with high-paced Hollywoodsy action and gloss.

It's based on the real events and personality of Attila Ambrus, born in Transylvania. In the 90s, Ambrus worked as a professional goaltender (and the team´s janitor) while moonlighting as "a gentleman robber" around Budapest. He never intended to hurt anybody, and even presented tellers with flowers during multiple heists, and while his escapades coincided with a rather rocky transition from communism to capitalism, Ambrus happened to be revered as a folk hero.

Robin Hood he was not, although that did not obstruct his rise to fame. The moniker allegedly grew after witnesses claimed his breath reeked of alcohol, a gimmick he happily embraced (in the film) after the first tabloid outings.

The basic blueprint of The Whiskey Bandit remains Ambrus life story that Antal, who also penned the script, faithfully follows, almost as a regular biography. The writer-director starts off briskly, weaving together three different timelines and three different stages of Ambrus' life: in the prime of his robbing adventures, being captured by the police and interrogated, and his early years in Transylvania as a child who ate all the wafers in the local church. As opposed to usual biographies, Antal adopts more spectacular style in re-telling the bandit's hijinks.

After the initial anticipating fragments give a sample of the impending sensational story, a real story, the director throttles back while still closely regarding the rhythm of action. Up to the point of the capture, the story uncoils in retrospect and then continues in linear narration, tidbits of his life, experiences and events complementing each other and disclosing the protagonist's motivation.

Despite the protagonist being really an anti-hero type, although a sympathetic one, he is portrayed as a problematic child coming from a broken home until he escapes Ceausescu's Romania and starts pursuing a new life in Hungary, explaining the wider sympathy he enjoyed.

Ambrus needs two things to have a normal life, money and Hungarian citizenship, neither of which he acquires the legal way. Landing the goalie job, out of pity, not due to his skill, he grows sick living poor and slowly plots how to make big cash fast. As a string of insignificant robberies gains media steam, the whiskey robber starts to savor not only the pile of forints mounting in his apartment, but the newly acquired social status and celebrity prestige of his alter-ego as well.

Not the usual rags-to-riches template, neither a biographical one, the bag from which Antal pulls the tricks is labelled action and crime. The approach results in a win-win situation, telling the real life story and immortalizing a local character, while preserving entertainment value for larger audiences, translatable beyond the borders of Hungary.

The director managed to find the balance between a story of Eastern European self-made man and cunning adrenaline junkie who kept fooling law enforcement despised by ordinary and poor folk. The transgressions thus acquired the dimension of a triumph of the ordinary folk, propelling Attila Ambrus into a larger-than-life version, over the greedy capitalists and their henchmen.

Antal pulls an Eastern European version of Heat without the Casablanca reconciliation. The Whiskey Bandit proves that the marriage of Hollywood and Eastern Europe is not that far-fetched and counterproductive as it might sound, at least when it's in the right hands.

Do you feel this content is inappropriate or infringes upon your rights? Click here to report it, or see our DMCA policy.
HungaryNimród AntalSummer Film School

More about The Whiskey Bandit