REVIEW: The Island never leaves the audience stranded in the name of seriocomical suspense and survival 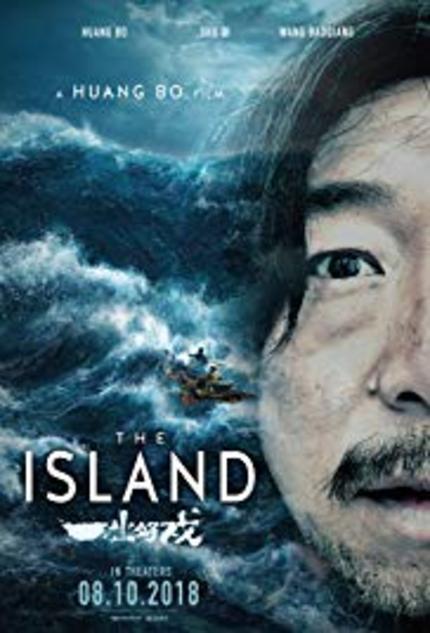 The psychological dynamics of social interaction are sardonically at play in the skillful survivalist black comedy The Island. Filmmaker Bo Huang, known mainly as a decorated Chinese actor/comedian mostly in comedies in his country, makes his sumptuous directorial debut with this cynically observant shipwreck showcase that echoes Lord of the Flies meets The Office by way of hapless cutthroat capitalists trapped in a morality play. Huang concocts a contemplative hybrid of action, romance, and suspense armed with unassuming, biting wit. The Island shines a notable spotlight on the plight of the human condition under duress in all its corrosive, uncertainty, and societal impishness. Indeed, Huang's stinging freshwater farce definitely stays afloat in all its darkened levity.

The Island pretty much sets its workplace politics on its head in wicked, water-logged fashion. The premise involves a bunch of company workers out on a corporate retreat at sea until the unimaginable happens...they set caught up in a stormy watery wasteland resulting in the jeopardized group getting stranded on an isolated tropical island. Soon, the unlikely paradise pitstop would become a stomping ground for the head honchos to instinctively rule with an iron fist. Interestingly, rival camps are set in motion and the two competitive company leaders Wang and Zhang (Wang Xiao and Hewei Yu) emerge at the forefront looking for followers catering to their leadership direction.

Downtrodden Jin Ma (Huang) is one of the working peons along with his buddy Xing (Xing Xiao) that are caught up in the "lowest man on the totem pole" syndrome as they are at the mercy of the so-called power-struggles on the island. Although marooned and miserable, Ma is hopeful about a couple of pressing issues weighing on his mind. First, Ma schemes to follow up his immense crush on his comely co-worker Shanshan (Shu Qi). Secondly, and most important, is Ma's anticipation of escaping the island for the great fortune the lowly employee had just discovered--winning the jackpot lottery! However, the catch is that in order to bask in his newfound riches Ma must claim the prize in 90 days. Ideally, Ma has both love and loot at his fingertips but clearly embracing either prospect is tricky as long as the confining island and his fellow duplicitous corporate castaways remain his unremovable obstacles.

Indeed, The Island enthusiastically incorporates its doomsday delivery with a giddy-minded punch of randomness that guides this deserted isle dramedy in flippant frivolity. Huang, whose direction and acting (while also boasting a co-writing credit with a handful of screenwriters) feels adventurous, aptly juggles the comical overtones with the mild romancing vibes while creating an inclusive bowl of tactical tension. Surprisingly, The Island is rather deep-seeded for a survival actioner and the messaging about a civilization on the brink of disaster could have been broadly interpreted as cliched. Still, Huang was resourceful in delivering a rollicking romp beyond conventionality that playfully takes an acidic swipe at erratic human drudgery...or at least the revealing hierarchy of society's haves and have-nots.

Clearly, Huang's social commentary on the unpredictability of flawed people set on the precipice of inner madness is wryly conceived. One can see the inspiration that served as a foundation for The Island--most notably the influence of the nostalgic mid-2000's American TV series Lost with its weekly dosage of situational and mental entanglements amongst the exposed souls of disillusionment. Huang's Jin Ma and his on-screen workplace worrywarts may be in need of some immediate rescuing but thankfully this intelligent brand of popcorn pleaser does not.