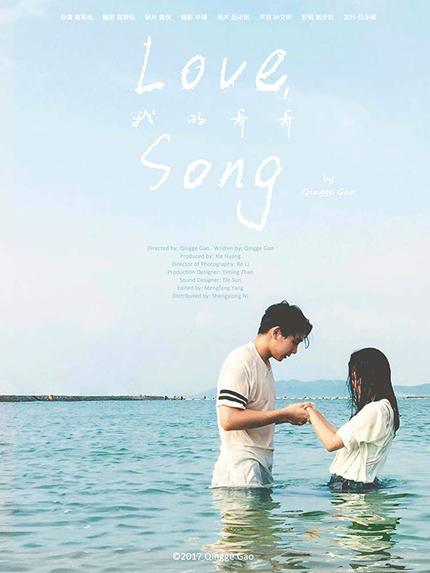 Writer/director/actress Qingge Gao’s poignantly sedate Chinese-language romancer Love, Song (a.k.a Love, Song: My Brother) is a devoutly tender and expressive short drama about the identity of love and romance between lifelong friends grounded in the questionable blur of committed childhood friendship morphing into passionate young adulthood. Convincingly sweeping in the aura of distinct elegance and understated compassion and complexity, Gao’s poetic romantic drama paints a provocative if not puzzling picture of uncertainty pertaining to the obligatory “brother/friend zone”–just how flexible can a revered union created in sibling-induced closeness as carefree kids can actually transform into something seductively in-depth while testing the boundaries of unbridled companionship as amorous grown-ups?

As a filmmaker with atmospheric flourishes of wistful imagination and visual vitality, Gao’s absorbing Love, Song is hypnotically structured in solid narrative concept aided by Bo Li’s arousing cinematography and Kevin Won’s soothing, gorgeous musical score. Sure, it is a simple and familiar story of rediscovered emotions from an organic perspective but Gao generates a robust sense of wonderment when spotlighting the heightened bond of charismatic leads lost (and enthusiastically found) in both togetherness and separation. Breezily breathtaking and heartfelt, Love, Song’s only major fault is that it could not escape its shortened running time confines in favor of a feature-length film further delving into the essence of these featured unconventional lovebirds/long-time partners.

During China’s One Child Policy (1982-2016) due to the efforts in easing the steady growth of the country’s over-population, there were two close families coincidentally sharing the same surname of “Song”. In each of those aforementioned families were single youngsters Jiujiu Song (Ruohan Wang) and Dabao Song (Haorui Zhang). They were unrelated and never knew what it was like to have a sibling during this “only one child rule” being enforced nationwide. Since they were the only child in each of their family units they became symbolic siblings…both serving as the brother and sister they were deprived of having within their familial ranks. Thus, the “pretend” sibling duo remained close and shared the adventurous childhood/teen years as confirmed blood relatives. Hence, the spirited connection of family-related sentiments guided both Jiujiu and Dabao through their growing pains and beyond.

Sadly, Dabao and his family would move away and break the lengthy loving association that the inseparable tandem had going as a pseudo-brother-and-sister act. This, of course, is devastating news for Jiujiu and Dabao. However, as time passes while the now grown twenty-something Dabao (Yunjie Ren) is studying elsewhere Jiujiu (Gao) starts to question and explore her strong feelings and attractions that go far beyond her sisterly affection for him. The question remains: how can Jiujiu pursue her newfound romantic feelings for the absent Dabao? Can she conquer the reserved brotherly love mindset and investigate her deeper love and lust for someone that was practically considered her dependable sibling for all these years? Will Jiujiu  her incestuous-like affection for a young man she now sees in a different romantic light? Plus, how will Dabao her craving for him without feeling awkward towards her? Is there a chance that hopefully, Dabao will reciprocate the same kind of loving consideration for his honorary baby “sister” Jiujiu?

Fortunately, Dabao’s brief visit back to Jiujiu’s home (in recognition of her 21st birthday) after a long time away reunites the once cute kiddies that vowed they would be steadfast siblings as they played mischievously at the beachfront. The film occasionally cuts to flashback scenes showing the little tots Jiujiu and Dabao romping around aimlessly while also displaying their young adult versions sheepishly reminiscing about their  days in the past at the same beach setting binding them permanently as attentive bro and sis. The act of Jiujiu and Dabao reenacting their childhood antics as young adults feel quite engaging and endearing. In fact, one can almost capture what their empty psyches were starving for after the many years of being apart. Thankfully the twosome never seems to miss a beat at all in rekindling their treasured memories as children.

As Jiujiu pushes in convincing Dabao that he needs to see her clearly beyond that younger sister facade that he cherished so much in the past the audience notices his incidental glimpses of attraction that he is trying to stave off. But who can blame Dabao as the ultra-pretty Jiujiu is curiously radiant in his eyes? However, Jiujiu’s concerned mother reminds Dabao that her daughter is impressionable and warns him not to break her heart. In defiance, Jiujiu hastily informs her worrywart mother that “Dabao is not my brother!” Think Donny and Marie Osmond meets Romeo and Juliet. Ultimately, there is a defining twist that is revealed at the end of the story that calls for the slight disillusionment of JiuJiu’s and Dabao’s ambivalent relationship that makes for a sentimental obstacle that tugs on the heartstrings.

In the film’s press release, star Gao offers this generous reasoning, “I hope this story of the individual experiences of two people under the policy can help them better understand Chinese society and my generation. “Love, Song” is a love letter to love of all kinds, including sibling love, platonic love, and romantic love.”

Truly well-tooled, inspiring, perceptive and saturated with warm revelation, Love, Song is an intimate breakthrough for the immensely gifted Gao as an intuitive Chinese New Wave filmmaker and performer front and center dripping with vivid creativity.

Do you feel this content is inappropriate or infringes upon your rights? Click here to report it, or see our DMCA policy.
ChinafeelingsOne Child Policyshort filmsiblings