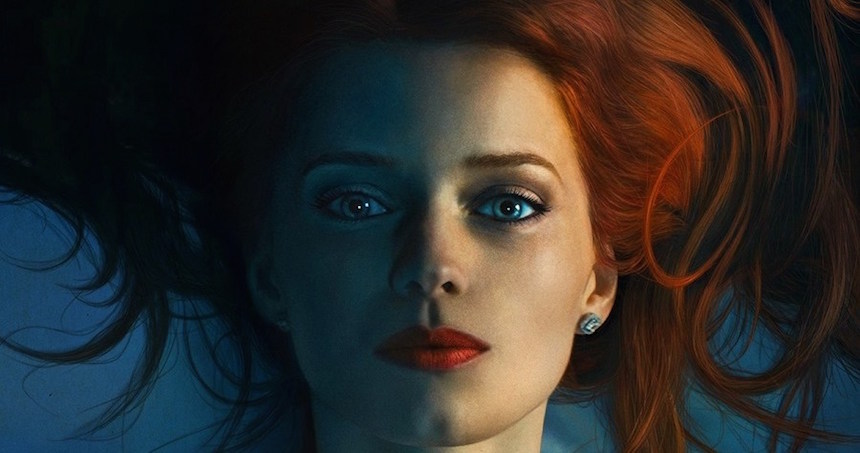 Elizabeth Harvest goes full steam ahead right off the bat, presenting a familiar narrative of unreliable characters, mystery and cabin fever. Newlywed Elizabeth arrives at a lavish yet isolated house owned by her husband, older and obviously wealthy scientist Henry, where she is pampered by a two-person staff.

The first twenty minutes of the film presents a condensed moral tale implicating self-destructive human nature emerging from curiosity - a fable veiled in a bleaker robe. Elizabeth has it all yet there is one room in the house that is off-limits. She fails to complain the only restriction threatening her fairy tale life happily ever after.

Given the very archetypical design, Gutierrez moves to a rather shocking climax. Planting a twist, even though not that unpredictable, so early on demonstrates the writer-director´s attempt to re-structuralize the usual plot expected for this kind of story.

The fate(s) of the leading character thus serve as a vehicle to expand the supposedly secondary characters whose influence and part in the actual story is much larger than their engagement in the first twenty minutes suggest. This might be considered baiting for some viewers, however Elizabeth Harvest is more of a patchwork of intertextual references merging sci-fi and gothic tale, mixing and revamping them into stylish, neon-lit, survival (melo)drama.

Gutierrez has written what could be called a standard speculative fiction trading a creepy castle for high-tech house and inhabiting it with familiar figures and roles rehashed for the 21st century.

Where the director diverges from the expected path is the amplification of pathology to spice the narrative with a bit of horror-ish elements. Elizabeth Harvest ends up being an all-around genre mix not excluding thriller and mystery aspects as well although the homogeneity remains preserved despite the plethora of disparate elements spread over the genre spectrum.

After the 20-minute breaking point, the perspective of narrative and the narrator shifts to let the character of "mad genius" Henry play his role. Among the very first images introducing viewers into the story belongs an oblong convertible with newlyweds Elizabeth and Henry entering a tunnel.

The in-yer-face Freudian cliché of cinema, akin to the first 20 minutes, bears a wider reference to the story and provides an exposition of its own into the inventory of symbols and a key to read them.

The age-gap of the couple is hard to overlook and the coitus does not take that long to happen. Despite the incestual vibe, the actual psychopathology happens to be of different nature, another of several twists in the Gutierrez´s arsenal as the origin story uncoils slowly in retrospect justifying the actual presence of the two-member domestic staff portrayed by Carla Gugino and Matthew Beard.

Elizabeth Harvest as a re-imagination of a gothic tale revolves around the psychosexual attributes and metaphors. The narrative strategy matches the story since primal instincts make up a fair share of folk and fairy tales.

The film was most likely conceived as a rollercoaster of twists and turns in the vein of Wayward Pines where there is no shortage of no-way surprises turning the story upside-down every time. However, for such a feat, Gutierrez´s narration lacks the velocity as it frequently retards the plot development in order to muse upon provocative ideas usually carried out through Henry´s soliloquies.

No wonder, Ciarán Hinds´ baritone-voice seduces to all kinds of philosophical contemplations. And his casting is well suited, Hinds who starred as Sir John Franklin recently in AMC´s survival horror drama Terror, as an aged and over-intelligent (read mad) scientist bears all the necessary patterns of a father figure to pass the film as a re-imagination of biblical myth as cycles of creation and destruction turn out to be an ongoing motif.

Elizabeth Harvest as an autonomous story may have too feeble legs to stand on its own, its richness springs from the references and myths weaved into the flat tragic story of the central couple. The kinky melodrama appropriates and mediates more archetypes and myths than meet the eye.

While the film verges on a multi-genre mix, the director renders the plight of the young bride and torments of the experienced scientist into a very expressionistic style, occasionally remeniscent of Juraj Herz´s Gothic horror Morgiana.

Two dominant colors become carnal red and aseptic blue as those filters become periodically applied offering a handful of denotations. Along the duality of colors, a duality of cinematographic style, including the use of split-screens, bears a further meaning as carefully composed and fixed shorts associated with blue color are being exchanged for more expressive, less refined, hand-cam-like shots rendered in crimson.

The film is a stylish genre cross-over of speculative fiction knitted as the mash-up of different patterns, archetypes and myths. The deciphering of the appropriated and assimilated pre-textual base material keeps viewers busy as the doe-eyed protagonist struggles to survive in the claustrophobic setting.

Do you feel this content is inappropriate or infringes upon your rights? Click here to report it, or see our DMCA policy.
Sebastian GutierrezDylan BakerMatthew BeardCarla GuginoCiarán HindsThriller