Review: DOWN A DARK HALL, Deceptive Gloom at a Boarding School 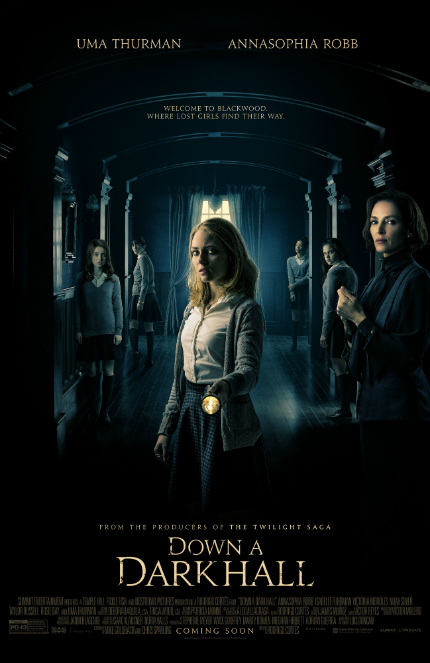 Set in the present day, Down a Dark Hall liberally borrows elements from gothic horror to style its gloomy atmosphere.

Teenage Kit (AnnaSophia Robb) is sent to the Blackwood Boarding School as a last resort. She has no aptitude for learning, nor does she wish to apply herself; instead, she expresses herself by acting out her rebellion, to the continuing frustration of her mother.

So Kit finds herself dumped at Blackwood, along with four other teenage girls who have engaged in illegal activities. It's a criminal gang in the making, but strangely they are the only students at the school. Headmistress Madame Duret (Uma Thurman) speaks quietly yet firmly, with an accent that I couldn't quite place. Is she from Germany? Hungary? Austria? Transylvania?

No matter. She is an other of indefinite origin, in a position of respect, and that's not the point anyway. She makes it clear to the girls that she knows all about their criminal activities but none of that matters to her. The school offers only four essential subjects (art, literature, mathematics and music) for study, each taught by a different instructor.

Amazingly, each young woman begins to flower in a different subject and the atmosphere at and around the school becomes (slightly) more inviting and the perpetually dark halls -- due to something beyond control, ahem -- brighter. Yet, all the while, Kit has been seeing something in the shadows at night, and rest assured that the school will not remain a comfortable environment for learning.

In the hands of director Rodrigo Cortés, Down a Dark Hall starts slow and gradually increases its pace. It's very much a bumpy, uneven journey. Cortés is known for the clever, if somewhat repellent and claustrophobic thriller Buried (Ryan Reynolds in a coffin) and Red Lights (a dramatic fantasy I have not yet seen).

His newest feature is certainly compelling to watch; as with Buried, he constantly presents the drama from unexpected angles. With a large mansion-style boarding school to play in, he has far more room for swirling camera movements; director of photography Jarin Blaschke (The Witch) works elegantly with the conceit of underlit backgrounds, and finds drama without creating it unnecessarily.

Cortés also serves effectively as film editor, as he did with his previous features, which helps to explain the insistent forward momentum. With those positives in mind, what can explain the underwhelming nature of the film as a whole?

Perhaps it's that some of the performances are much stronger than others, while the dialogue struggles to maintain a consistent tone. Adapted by Michael Goldblach and Chris Sparling (Buried) from a novel by Lois Duncan (I Know What You Did Last Summer), which was aimed at young adults and first published in 1974, the story proceeds in a deliberate path that often turns against expectations.

We know from the setting and the lighting that the boarding school holds secrets that will be, at minimum, unsettling, and at maximum, terrifying, and the writing is fine, though it introduces several more characters than in Duncan's original novel for reasons that are not compelling. By sheer dint of numbers, then, the cast must be easily identified by their stereotypes. On the plus side, the writers endeavor to ease the overriding gloom with one-liners, delivered by various cast members with good bite and timing, for the most part.

As enjoyable as it is to watch Uma Thurman as the stern Madame Duret, she towers over the young women playing the students (and not only in her height), to the point that I wished the story was all about her character, rather than the less interesting Kit. Also, Isabelle Fuhrman is underutilized as fellow student Izzy; Fuhrman has shown her range in films like Orphan and TV shows such as Masters of Sex, so it's disappointing to see her reduced to an absolute minimum as a rather dull young woman.

As the pace picks up, Down a Dark Hall more clearly signals its intentions and becomes a more conventional thriller. It adds up to an experience that I admired for its intentions and ambitions, more so than the relative enjoyment of actually watching it unfold on screen.

The film will open in select U.S. theaters in Chicago, Cleveland, Denver, Philadelphia, Minneapolis, Salt Lake City, Phoenix and Tampa on Friday, August 17, 2018. It will also be available to watch via various Video On Demand platforms.

Do you feel this content is inappropriate or infringes upon your rights? Click here to report it, or see our DMCA policy.
AnnaSophia RobbIsabelle FuhrmanLois DuncanRodrigo CortésSpainUma ThurmanUS