Now On VOD: AHOCKALYPSE Is A Lowbrow, Dumb ZomCom That Shoots Wide Of The Goal 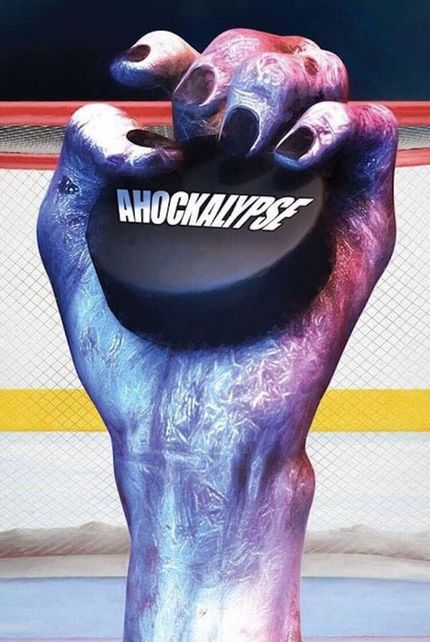 When a minor league hockey team is attacked by zombies shortly after winning a local championship trophy, it's a race to freedom as they spend one crazy night fighting their way to safety in writer/director Wayne Harry Johnson Jr's sophomore feature, Ahockalypse.

As the Prairie Kings take the ice in the final period for the finals against the opposing Ice Cats, they are losing by a single goal. In what seems like a stroke of luck, they manage to pull off the win after the Ice Cats' star player is struck down by sickness, but not everything is what it seems. After running into the Ice Cats in the parking lot - still in full game gear - the Prairie Kings take off to their hotel to celebrate, and that's when things start to get really weird.

It turns out that the Ice Cats weren't sick, they'd been turned into flesh-eating zombies, and the Prairie Kings are among the few survivors of an outbreak that occurred while they were on the ice. The core players, consisting of star player Jonsey (Jesse Rennicke) and his teammates and closest friends, are a goofball crew who don't really have any plan to defeat or escape from the zombie menace. They spend the entire film running from place to place, fighting off zombies, before eventually deciding that the only correct thing to do is head back to the arena to take care of the threat once and for all.

Ahockalypse is not a good movie. No amount of dirty jokes, kung fu mascots, racist Asian stereotypes, decapitations, or computer generated blood can dig the film out of the hole it digs for itself. The film is lazy in a way that makes it really hard for the audience to care about anything happening on screen for any longer than it's actively happening. There are a couple of decent gags, and the kung fu mascot is worth a giggle, but beyond that Ahockalypse is like classic Troma but without the joy.

With ambitions of landing itself somewhere between Goon and Shaun of the Dead/The Walking Dead/take your pick, Ahockalypse falls far short of those goal posts, even taking into account the massive budgetary discrepancy. It's as if they couldn't decide if they wanted to make the film a series of loosely connected gags or an actual film in which the characters are meant to draw our empathy. It fails on both counts, not delivering memorable enough gags, nor characters with whom we are interested in spending eighty minutes. Bummer.