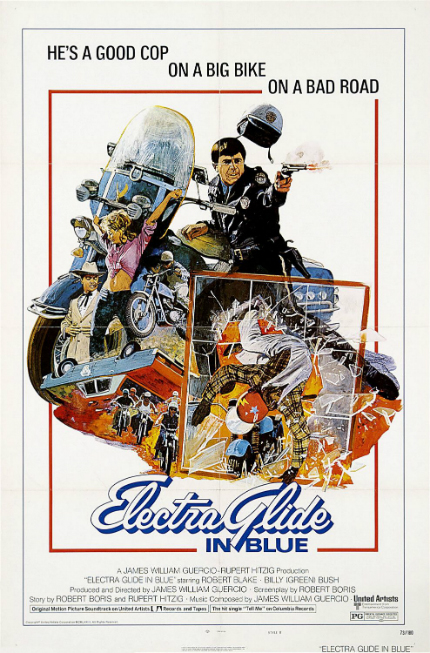 Every generation gets the Robert Blake it deserves.

In 1939, young Mickey Gubitosi began appearing in the Our Gang series of short comic films. He took on the stage name Bobby Blake for other films through most of the 1950s, and then became Robert Blake. In 1967, he chillingly portrayed home invader and cold blooded murderer Perry Smith in Richard Brooks' In Cold Blood, based on a true story.

In 1973, Blake starred in Electra Glide in Blue. What I remember about that film is the poster, which depicted Blake in a line of police officers and a quote above his head: "Did you know that me and Alan Ladd were exactly the same height?"

I was a short kid myself at the time - not that I've grown that much since then - and extremely sensitive to the ribbing I got from other boys about it, so the poster made me feel ... empowered, I guess. I never got to see it in theatrical release, but I've always wanted to see it, all because of Robert Blake and his height.

So I wasn't quite prepared to finally watch the movie and realize it's a stone cold classic, at least for its first hour or so. (Then it dips to 'still very, very good.')

Blake embodies John Wintergreen, an Arizona motorcycle police officer in what director James William Guercio describes as a Western about the "tragedy of a mistake." John, who always goes by the book, yearns to make something more of himself as a homicide detective. When he is the first officer on the scene after a man dies violently, he seizes the opportunity and impresses big-shot Detective Harve Poole (Mitchell Ryan), who invites him to become his driver on the case.

Inspired by a real life incident, director Guercio says that he wanted to pay tribute to police officers who put their lives on the line, as well as ordinary men who want to make more of themselves. Blake plays his role perfectly; he quietly commands the screen with his presence, even when he's not the center of attention.

He's supported by Billy Green Bush (as a fellow officer), Jeannine Riley (as a waitress), Royal Dano (as a coroner) and Elisha Cook (as a broken-down old man). Other roles were played by local residents (in and around Scottsdale, Arizona) and crew members.

What begins as an easy-going, episodic tale -- 'Life of a Motorcycle Cop,' or some such -- soon develops into something more, and it becomes apparent that was the plan all along. On the very fine 2013 Blu-ray edition from Shout! Factory, Guercio readily admits that he is not comfortable as a verbal communicator, feeling more comfortable with expressing himself visually.

Guercio was trained as a musician and went on to a career as a music producer, musician and composer. When given the opportunity by David Picker at United Artists to make a movie, however, he grabbed it, and gained valuable collaborators in Robert Blake and cinematographer Conrad Hall (who also shot In Cold Blood and Butch Cassidy and the Sundance Kid, among many others). Robert Boris wrote the script, though Guercio says many scenes were improvised by the actors.

Not yet 30 at the time, Guercio shows a tremendous cinematic potential in the film through his framing and pacing and editing. In its second half, he indulges his supporting actors to an unhealthy extent, allowing them to showboat, but the actors liked it and Guercio liked it and the budget was under a million and the shooting schedule was very tight and many of the scenes were one-take wonders and, dang it, it was his picture, so it all stayed in.

Even so, the film's power is only slightly dimmed and what remains is, yes, a quiet picture that is remarkably potent.

A one-film directing wonder, Guercio returned to his musical career, joining the Beach Boys for a spell and then working again with Chicago. He left the recording industry in the 1980s and pursued other interests

As for the star, Peter Hyams' crime comedy Busting followed in 1974, with Blake and Elliott Gould as vice-squad cops in Los Angeles. (I have a DVD, I think, that just moved far up in priority on my 'to watch' list.)

After that, the television series Baretta (1975-78) ran for four seasons and that is how I became more fully acquainted with Blake's screen presence. Created by Stephen J. Cannell (The Rockford Files, and later The A-Team, Wiseguy and 21 Jump Street), the series revolved around a tough and gritty, yet lovable New York City detective. As I recall the episodes were well-done but rather typical of the period; the show's appeal rested entirely upon Blake and I tried not to miss an episode. (It's also where the catchphrase "don't do the crime if you can't do the time" originated.)

After that series ended, Blake starred in Coast to Coast and Hal Ashby's Second-Hand Hearts (produced by Guercio), as well as three enjoyable TV films built around a character named Joe Dancer. Things started to tail off after that. In 1997, he gave his final performance to date in David Lynch's Lost Highway, playing a truly frightening character.

In 2001, his wife was shot and killed; a year later, he was arrested and charged with murder. His trial was a media sensation. He was eventually acquitted in 2005, though found liable in a civil suit for the death of his wife.

Blake will turn 85 next month. Electra Glide in Blue remains a high point in his career. 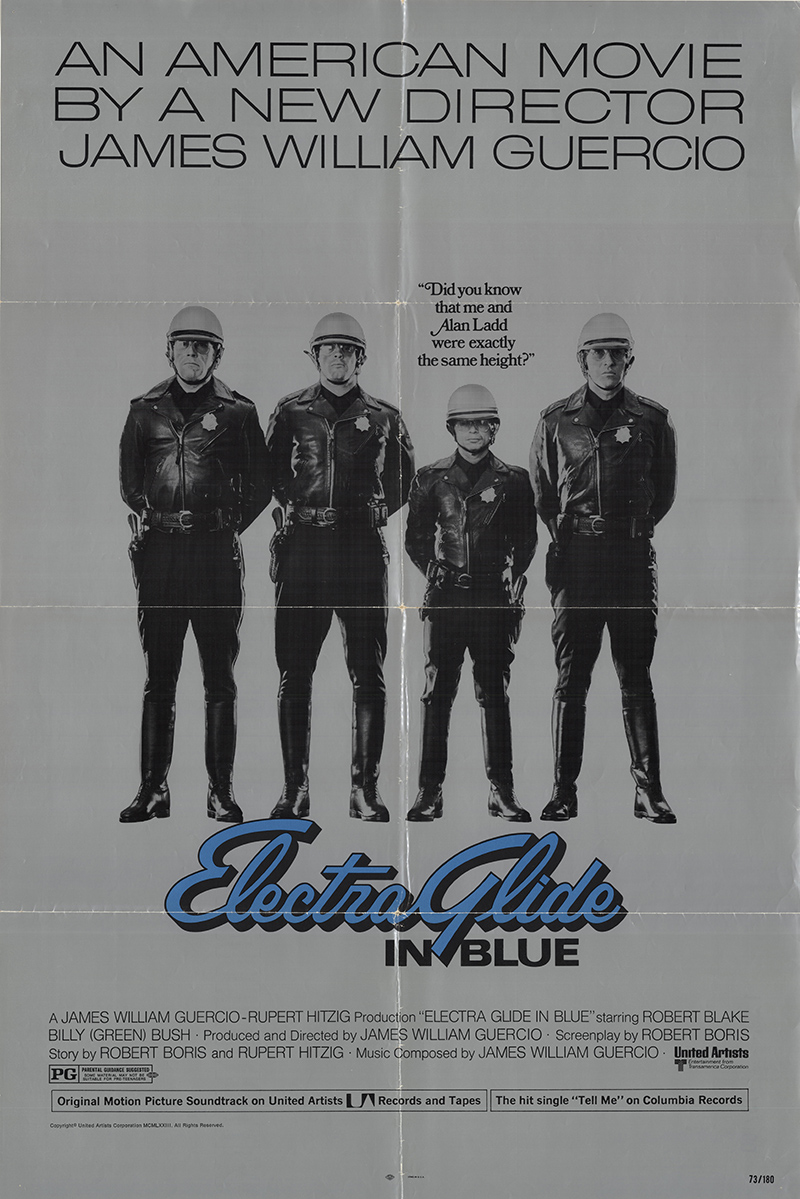 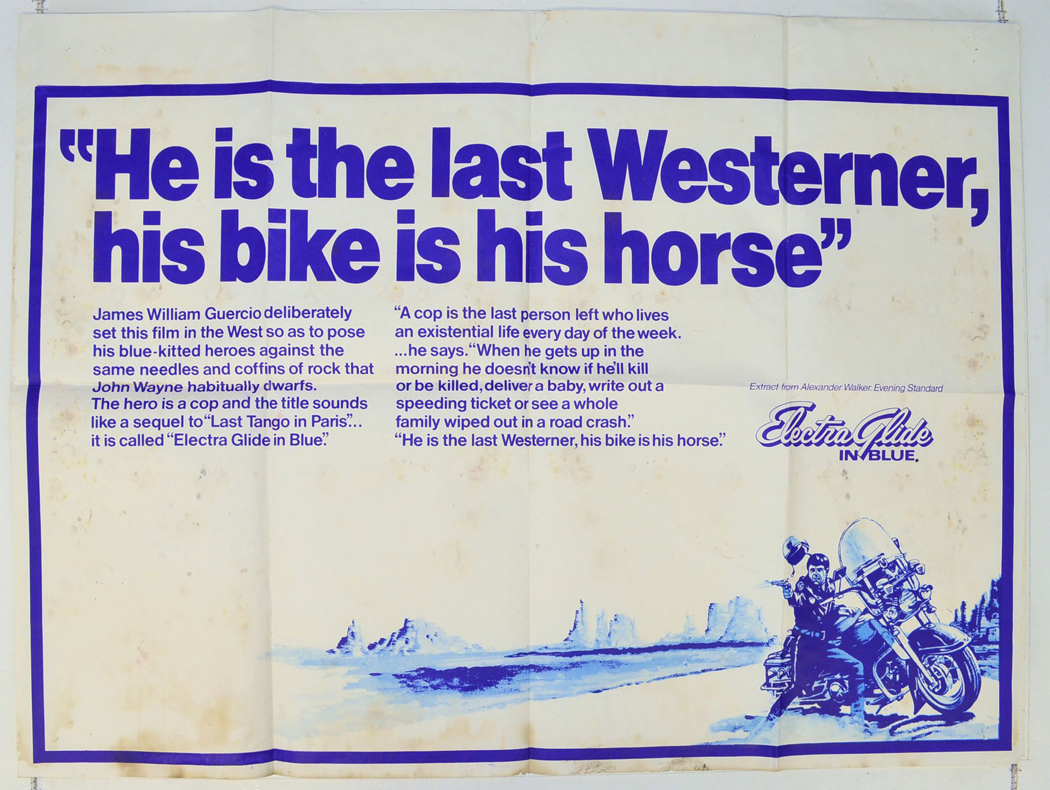 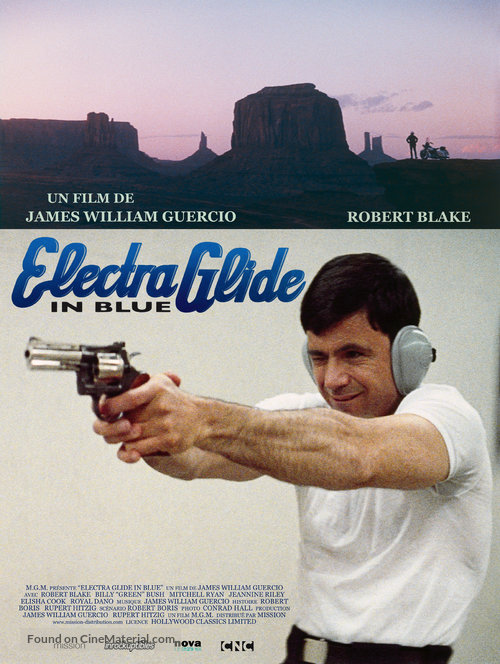 Do you feel this content is inappropriate or infringes upon your rights? Click here to report it, or see our DMCA policy.
70sBilly Green BushJames William GuercioMitchell RyanRobert Blake