Fantasia 2018 Review: THE DARK Is Inside All Of Us 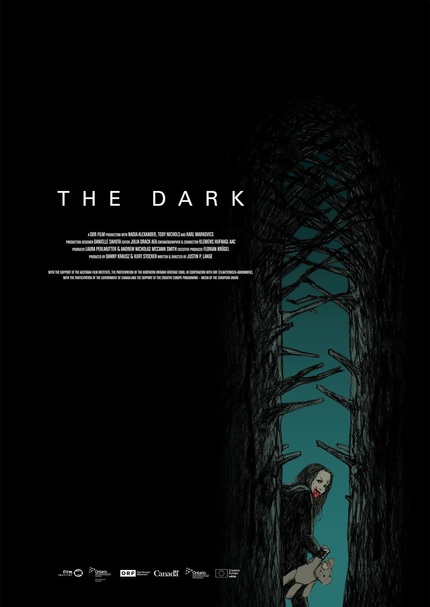 There is a monster inside of all of us. A monster made out of pain, frustration, and fear. A monster fed by neglect, trauma, and anger that rears its ugly head when we get tired of fighting. In director Justin Lange's debut feature, The Dark, that monster is a literal one. A beast borne of trauma and anger that feeds on the flesh of the wicked from its home deep in the forest near Devil's Den, and the beast is hungry.

The Dark is the story of Mina, a hideous undead monster who lives in an abandoned house in the woods that has been the subject of folktales for ages. When an escaped killer stumbles upon the house in search of a place to hide while on the lam, Mina senses it and kills him. What she doesn't know is that he wasn't alone, there is a kidnapped and blinded boy, Alex, along for the ride. When the two meet there is instant empathy between them, something Mina hasn't felt in a long time, and she decides to try and help him get back home, but they must each fight their own demons if they are going to last that long.

Alex's disappearance has triggered a manhunt in Devil's Den, and if they find Mina, she's done for. Unable to see Mina's mangled form, Alex at first doesn't understand his savior's hesitance to move outside of her comfort zone, but after a while they begin to understand each other in ways neither expected. They help each other to heal, both emotionally and literally, until perhaps Mina can kill the monster she has become.

Lange's story on the surface is one of a kind of sentient zombie, a flesh-eating ghoul, who takes a young boy under her wing, but The Dark is more than that. Not consistently bloody enough for some of the more hardened gorehounds, but perhaps too gooey for the modern "elevated" horror crowd, The Dark exists in an unusual space that independent horror has been exploring for decades, but never quite like this.

The relationship between Mina and Alex is constantly evolving, from monster-victim, to caretaker-pitied, and eventually to equals and beyond. The transformations both of them experience over the course of the story are emotionally wrenching, especially when we begin getting glimpses of the trauma that brought Mina to her current predicament. Unfortunately, we don't get quite as much background on Alex, but I guess it's not really his story.

The Dark, because of its more considered approach to the horror of the situation, relies heavily on the chemistry and performances of its leads, and they do a fine job with the material. Nadia Alexander's Mina is a great character brought to life in a wonderfully evolving and nuanced performance, while Toby Nichols' Alex is a bit more flat, but does its part to support Mina's arc.

A surprisingly delicate treatment of its subject, The Dark is an unusual and refreshing film that was definitely one of the biggest surprises for me here at Fantasia. Lange's vision and interest in telling engaging stories is clear, and you can feel his heart beating throughout the entire film. It takes a good forty minutes for the film to make clear what it's going to be, but once that revelation becomes apparent, it's engaging and emotional resonant for anyone who has ever been the victim of a trauma that seemed too big to overcome. There is healing for everyone, you just have to find out what it looks like for you, in The Dark, it just takes a look in the mirror and the willingness to let go.