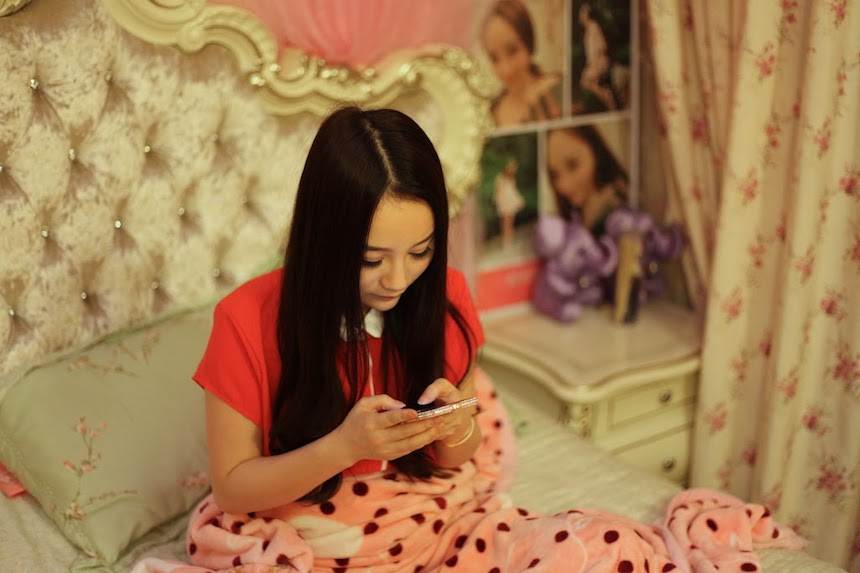 There are some frightening dynamics of China’s capital and technology sectors at play in People’s Republic Of Desire, a documentary on the YY Live streaming platform. Relatively unknown in the West (who have their own online addictions issues with Facebook, Twitter, Instagram and Twitch), but given the sheer scale of China's population, YY is ridiculously huge, both financially and culturally. The old Roman notion of bread & circuses is alive and well, and is dominating the virtual spaces we have created for ourselves in the last generation or so.

YY builds online celebrity culture through its live-chat channels. This is where everyday citizens can perform in their home and potentially become famous for being famous, simply by chatting, ranting and singing for their audience. The innovation is here is how it is monetized via gifts, donations in the form of digital trinkets, bought with real money, and given to the host while their are webcasting. These gifts are verbally acknowledged by the host in real time without a wisp of shame. In fact it is the visible act of showering the host with money, and being called out by the host for giving them money, that seems to be how things have evolved to keep its audience. This is the part where I admit to being old and out of touch (is chat roulette still a thing?), so, caveat emptor.

The nouveau riche in China's swelling economy, or sons of the wealthy class that are bored with their Maseratis or bottle services of Cristal in fancy nightclubs, purchase this new form of conspicuous consumption and fame to show off to the large audience of have-nots. Up until the internet, there has been little interface between the wealthy Chinese and the poor Chinese. The young, web-savvy monied-class become 'Patrons' of the various celebrities by spending large sums of money on one YY host or another (backing them with, in some case, millions of dollars) in a kind of 'sweeps week' financial competition on the platform.

The hosts then ramp up their shows and their content becomes laser-focused on raising followers and donations. Who knew that the venerable PBS system of keeping itself on the public airwaves would manifest itself in this dystopian fashion online. YY takes a cut of all transactions, and an increasing 'middle-man' layer of Talent Agencies take their cut, and many of the 'big bosses' are investing in YY itself, which is experiencing a huge bump in value. It is disturbingly analogous to various Ponzi or Pump & Dump financial market shenanigans, only here it is with idolatry and the fetishization of fame, with no product (such as an musical album from a pop star) necessary.

The YY screen itself, either from the host or the audience point of view, has so much visual clutter, stock-ticker crawls of followers coming in and out or leaving comments (many of which are as toxic and sexual as the depths of YouTube, but here they rendered live to the host to react to immediately), and of course all the money pouring in represented as colourful animations. Hao and his graphic designer, Eric Jordan, attempt to simplify all what is happening in these chat rooms, and also to demonstrate relationships of all the interested parties for an international audience that likely would be lost in the complexity. Subversively, the filmmakers then begin to use these graphics into their ‘real world’ footage, augmented-reality style, to emphasize the blurring of real life and online life, for not just a generation of children immersed in this stuff, but increasingly, all of us.

The People's Republic of Desire follows two of these top hosts, from 2014 to 2016, when YY was in a period of unfettered growth. There is, Shen Man, a former nurse who, in her early twenties, has climbed her way to significant real-world wealth, and is supporting her unemployed father, her step-mother and entire extended family, as the only bread-winner of significance. She, like most of female YY hosts, exists in a world of coy sexuality, flirting, and increasing body enhancement, to attract followers and patrons.

Absent any shame in this brave new world, Shen may be coy about sleeping with other hosts or key patrons, to string them along ad infinitum, but she is up front about getting a boob job if people will like her more for it. Her father (and step-mother) are nakedly profiteering on their daughter's success, and there is a moment captured where Shen Man breaks down during a media interview with complicated, real emotions towards her father while taping a segment for traditional TV media. She has the unit stop filming the interview, which feels a thousand times more genuine than anything captured on her webcam (Hao’s camera, however, keeps filming). It underscores that for all the involvement and energy this cultural moment is generating, only the fantasy is up for sale. A lot of time here is spent trying to wrangle the complicated relationships between corporate industries and family and the money that forms the mortar of society to enable a cultural moment like YY. This comes somewhat at the expense in letting us understand the pleasures, or addiction, of the platform. Or, even more subtle, the nuance of just how self-aware or oblivious those using the system to its naked capitalism. Where the cultural rubber meets the road, is left for us to decide -- a conversation to be had after seeing the film, for sure.

There is also Big Li, a cocky-but-tubby schlub turned hotshot, who is wildly popular in part because he is 'living the dream' of a cohort of boys in China with little income and few prospects, by making ‘easy money’ with his computer. His fans are the migratory workers from humble families with no connections, whose life is spent working long hours for little money. A disproportionate amount of which is spent on their smartphones financing, in micro-doses, Big Li's lifestyle. Theirs is such a notably unique demographic in China that it has a name: Diaosi. One such diaosi, 18 year old Yong, who gets a fair bit of screen-time, is a fan with a lot of his emotional energy, and a disproportionate chunk his meagre funds, invested in Li’s success. What we see of Yong's drab dormitory living conditions and transitory labour existence is unfortunate, if familiar, but the tragedy here is that he desires to be his hero Big Li, which we see here, caught in a bigger trap with far higher stakes.

After a brief flourish (and everything on the web is hyper-speed) Li's moment of success and influence appears to be winding down. As Li fails again and again to win YY competitions, and like a desperate gambler, begins increasingly feeding back his own wealth to bolster his numbers, there is a terrifying desperation captured by Hao's camera.

Li's domestic despair is shot, unblinkingly. The pressure to perform (and failing to perform in a system the 'host' has little control) manifests itself bouts of depression, and lashing out at his infant son in ways that should make most parents uncomfortable. Li's wife, Dabao, is trapped with a petulant man-child lost in his own hubris, and raising a son inside the prison of maintaining his outward 'success' to yield some actual success. In a bit of irony, Dabao at one time was higher on the YY food chain than her husband. She worked as a talent scout and groomer in the platform’s early days. She was one of Shen Man's original handlers before Man's meteoric rise to fame. Like many populist subcultures it is wide reaching and insular at the same time.

Told mostly in the form of the competition structure:  Will Shen Man stay on top with newer younger hostess coming up in the world? Will Big Li defeat his nemesis, Picasso and give a championship to his legion of fans? People's Republic of Desire, in part, uses that comfortable and familiar through line to attempt to dig into the dozens of facets and social constructs that China has embraced in the new century. Hao Wu’s film scratches the surface of a complex social and financial web just enough to scare the heck out anyone not immersed in this virtual-financial bubble. (At one point in the film Shen Man's head actually floats on a sea of digital graphics trapped in a bubble.)

People's Republic of Desire serves as part anthropology study, part warning, but lets us empathize with the tragedy of the millions of users, celebrities, big bosses, and diaosi, caught inside it before the whole thing inevitably pops.