Jayam Ravi saves the world in the new film from director, Shakti Rajan 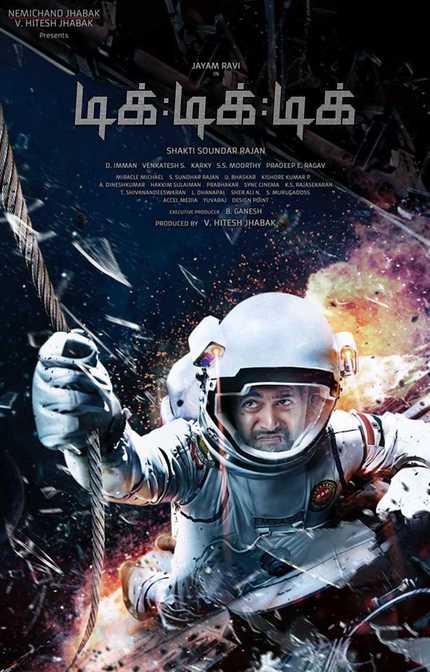 A sixty kilometer wide asteroid is heading straight for the Bay of Bengal off the coast of southwestern India. If the asteroid hits, at least 40 million lives will be lost in the southern states of Tamil Nadu and Andhra Pradesh (and some other places, surely, but let's stay focused here). The only way to prevent this disaster is to detonate a nuclear device in the heart of the harbinger of death to split it such that the resulting pieces change course and narrowly avoid Earth.

This should sound familiar, but we'll get to that later, roll with it for now...

Scientists have calculated that you have five days to complete this task before the asteroid gets too close to avoid an apocalypse. The click is ticking, what do you do?

Well, if you're the Indian Space Defense Service captain, Mahendran (Jayaprakash), you call on an infamous illusionist with a talent for escapes and a Robin Hood-esque beneficent streak to save the world! Were you expecting a team of crack oil drillers? That's another movie. M. Vasu (Jayam Ravi, Thani Oruvan, Miruthan) is just such a man, and like that team of crack oil drillers in that other movie, Vasu has a team of his own. The chubby, squeamish Appu (Arjunan) is one heck of a hacker, while Venkat (Ramesh Tilak) is a contortionist who helps with the ins and outs.

If this doesn't sound completely insane yet, you haven't been paying attention.

Director Shakti Rajan's third feature Tik Tik Tik is the work of a filmmaker desperate to introduce new ideas into a rather stale masala formula that has plagued Tamil cinema for a long time now. In 2016 Rajan made the musical comedy survival horror thriller - and Tamil cinema's first zombie feature - Miruthan, which was received pretty well by audiences and went on to play at a number of international genre film festivals. Tik Tik Tik is being marketed as India's first space film, which it kinda is (there have been other films that toy with the idea of space and aliens, but none that set the majority of the action off-Earth), and that novelty actually goes a long way toward satisfying the local audience.

The first half of Tik Tik Tik plays amusingly well as a culture swapped adaptation of Michael Bay's ludicrous asteroid adventure film, Armageddon. Many of the same plot points exist; outsider brought it to save Tamil Nadu (Earth) from an asteroid, assembling ragtag team of misfit non-professionals and training them to become astronauts at an absurd pace, a team leader (Vasu/Bruce Willis) overly concerned with saving his own child when the lives of millions are at stake, and on and on. However, the film takes some interesting twists that, while novel, aren't always executed as well as they could be.

Things get convoluted very quickly when Vasu's already quite complicated mission is compromised by an unseen villain. This provides for some of the film's lack of inertia in the second half, but overall it's a fun ride with more than few bumps in the road.

In Tik Tik Tik, the Space Defense Service is entirely self-contained in India, with no effort shown to reach out to the other nations of the world for help, presumably because they think no one will care. Not only do they not reach out, the plan is to actively antagonize one of India's chief global rivals in terms of economy and military might, which seems like a dodgy plan. However, it allows for the logic that states dictates that the only person who can save the earth is a magician, and that's worth it for me.

In the process, Rajan employs many tried and tested masala mechanisms to keep the juices flowing. Plenty of music, including a sweet montage in which we get to know Vasu's son Aarav (Jayam Ravi's real life son Aarav making his film debut), absurdly broad comedy including multiple events in which fluids - bodily and otherwise - experience zero gravity, and twists upon twists. It was the same kind of mixture of eastern and western tropes that made Miruthan such an intriguing and uniquely Indian take on the zombie film. In this case, however, it doesn't work out quite as well.

As much as I love everything about the direction the film was heading in, in the end - at least in my screening - things looked and felt more than a little unpolished. I don't have empirical evidence for any of this, so you can take it with a grain of salt, but my screening was incredibly dark and the visual FX (of which there were many) looked as though they hadn't been fully rendered. As a result, everything from simple gags like CG card tricks to major shots like the asteroid hurtling toward Earth, often looked as though they were sitting on top of the image rather than inside of it.

I know that Indian FX work still has quite a way to go to catch up with the major American studio blockbusters, but these looked rushed even when taking that into account. In a broader sense, many of the scenes in outer space looked quite dark to the point that it was often difficult to see what has happening and all shadows looked like endless black holes. Again, this was my experience at my screening, and I was befuddled because I rewatched the exciting trailer for the film that surfaced several months ago and that footage looks great. Hard to tell what was going on there, and normally I'll cut a bit more slack, but this was too big an issue to dismiss completely.

It's not all sad trombones, though, Tik Tik Tik is definitely a step forward and Rajan is one of the most innovative filmmakers working in Tamil Nadu today. Not only did this introduce a new genre to Tamil Nadu and India as a whole, it also worked as a step forward in terms of sidestepping the usual romance track that often plagues films that have no need of it. There is a strong woman in the supporting cast, M. Swathi (Nivetha Pethuraj), the co-captain of the shuttle team that takes Vasu and his crew into space. Pethuraj's character at no point has to deflect unwanted advances or bat her eyelids to get things done, she's all business and one of the strongest performances in the film.

Too many villains, not quite enough internal logic, and perhaps one too many homages take a bit of the shine off, but I enjoyed the film overall. If Tik Tik Tik manages to open Indian film producers' eyes to the potential for more adventures in space, I am all in for that. Shakti Rajan is a unique director in India right now in that he has vision beyond the usual gangster/love story/poverty porn films that typically get produced. That's what India needs, more filmmakers with vision, and I'm hopeful that Rajan's big ideas will eventually land him among the stars.