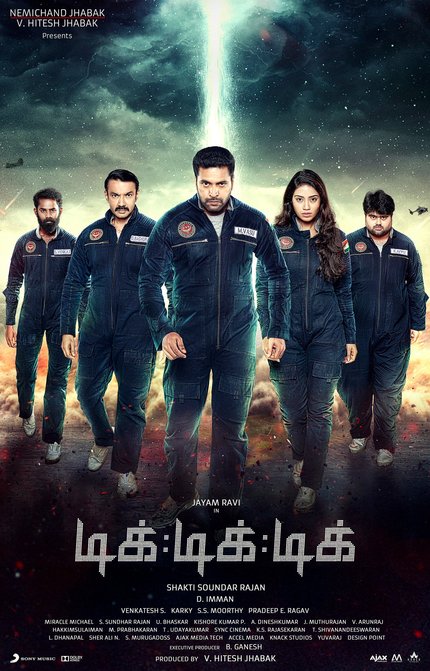 The director/actor duo of Shakti Soundar Rajan and Jayam Ravi tore up the genre festival circuit last year with their impressive - and very fun - musical survival horror action zombie thriller Miruthan last year, and the team is back at it again and upping the stakes with India's first space adventure film of the modern era. Tik Tik Tik pairs the team once more in what looks like a high concept space thriller that also has the potential to be extremely fun.

Tik Tik Tik is story of an impending asteroid strike set to wipe out a large section of south India. In typically filmi (hyperbolic) fashion, the only man who can save them is a "trained magician and escape artist" portrayed by Ravi in the film. To do it, he'll have to steak a 200 kiloton nuclear warhead from a Chinese space station that India will then use to blow up the asteroid, but the timer is running. Tik Tik Tik.

Supporting Ravi this time around are lead actress Nivetha Pethraj as an army commander, Aaron Aziz as the villainous leader on the space station/martial arts expert, and Ravi's son, newcomer Aarav as, well, Ravi's son.

We've been in conversation with director Rajan for over a year about this project, and I'll be honest, this trailer exceeds my expectations for the film and if he can deliver half of the excitement we see here, it looks like he could have another hit on his hands.

There's no set release date yet, and I know the team is still putting finishing work into the extensive FX required for such an ambitious project, but I think this one could be worth the wait. So, sit back and enjoy the impressive space splendor of Tik Tik Tik.